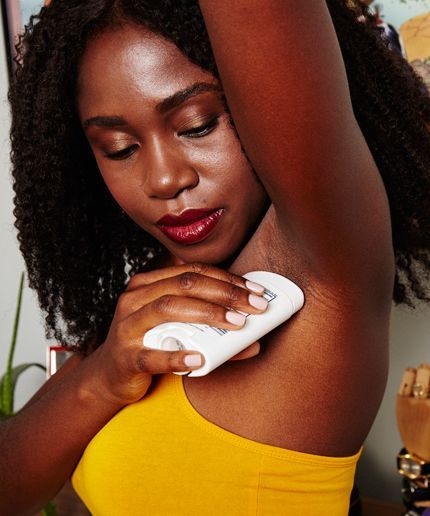 In the hierarchy of skin-care priorities, tending to our armpits falls pretty low. Of course, if you asked us, we'd say that we like our underarms to be free of sweat, smell, bumps, and maybe stubble (if you choose to remove hair there), but then we'd have to admit that we don't spend very much energy on getting them there. Instead, we rough them up with razors, swipe a bit of deodorant or anti-perspirant across them, and will them to cooperate whenever we're hot, active, or stressed.

The problem with that plan? It turns out our underarms are a lot more delicate (read: needy) than we've been led to believe. So, if you want to get rid of pesky bumps, discoloration, and odor, you're going to have to give them a little more of the same TLC you bestow upon your face.

Before we get into that, though, a brief lesson on the anatomy of an armpit: As dermatologist Jessica Weiser, MD, of New York Dermatology Group, explains, the surface of the underarm has two kinds of sweat glands: eccrine and apocrine. Eccrine glands are the ones you have all over your body that regulate your temperature. They produce clear, odor-free sweat when you're doing things like walking down the street on a hot summer day, or doing circuits at Barry's Bootcamp. Apocrine glands, on the other hand, are only found in areas with a lot of hair growth. They secrete fluid when the body is under emotional or psychological stress, and that fluid gets broken down by your skin's bacteria to create what Dr. Weiser refers to as "an unpleasant odor," and what the rest of us call BO.

But that's not all. The hair follicles in the underarm can also get clogged with dead skin cells or residue from your deodorant. The most annoying part? Simply shaving the delicate area on the regular is enough to throw your armpits out of wack. Shaving is, yes, exfoliation -- but it's a very aggressive form of it, and it makes it easier for dirt, bacteria, and irritants, like alcohol-based deodorants, to build up in the follicles. Not only that, it leads to ingrowns, which darken the area over time. And while there are plenty of creams that promise to lighten your underarms, Dr. Weiser says they often don't actually get to the root of the issue.

The good news, according to Dr. Weiser, is that a healthy armpit will look and smell pretty good -- and you only have to add a few simple steps to your routine to get it there. It's important to remember, says Dr. Weiser, that "above all, underarms should be treated gently, as the skin in that area is very sensitive and easily irritated."

You don't have to actually give them a facial (phew, because holding our arms above our heads while a mud mask dries isn't exactly our idea of a good time), but she does suggest using a soft washcloth or a gentle scrub to lightly exfoliate in the shower two to three times per week. Most of us can get away with using a body scrub or a bit of plain sugar, but if your skin is especially sensitive, use your facial exfoliator. "For more severe congestion, try a glycolic- or lactic-acid cleanser to help chemically break down dead skin cells," Dr. Weiser advises.

In her professional opinion, if you choose to remove hair, laser is your best bet to avoid irritation and discoloration, but she recognizes that it can be expensive and impossible for some skin types. "If you are going to shave, do it in the shower with warm water and a shaving gel or cream to soften the hair," she says. "Change your razor blade every five shaves for best results, and keep your razor dry in-between uses to prevent bacterial and fungal growth on the blades. And don't forget to shave in the direction of hair growth!"

Ideally, you should shave at night to allow your skin to heal and take a break from gels and creams, says Dr. Weiser. Then, consider the deodorant or anti-perspirant you've been using. If you suffer from uneven skin tone and dark patches, some brands, like Dove, make formulations designed to help soothe irritation and prevent future discoloration.

However, it's often alcohol, the primary ingredient in many traditional deodorants, that causes irritation in the first place, so Dr. Weiser suggests trying a natural crystal or mineral deodorant instead. Another option: an activated-charcoal deodorant, like the one from Kaia Naturals, which can help to absorb sweat, bacteria, and pollutants from the skin's surface. Note that these products haven't been studied enough to show consistent efficacy, but they're worth considering if you want to make the switch from traditional aluminum-based anti-perspirants.