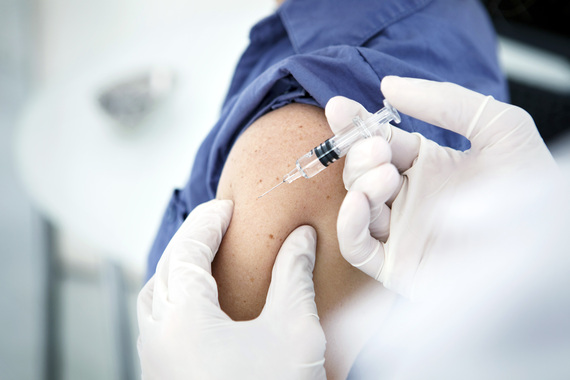 When fall rolls around, there are almost as many signs advising you to get the flu vaccine as there are telling you to buy pumpkin-spiced products. These PSAs make it seem like getting a flu shot is easy and obvious, but every year, the majority of American adults choose NOT to make that long, difficult trek to the pharmacy on the corner. So should you? We won't tell you what to do, but we'll help you think through it.

It can limit the likelihood of an epidemic
The first thing to remember is that the flu shot recommendation is a public health measure, which means it'll benefit more people than just you, you selfish jerk. The goal is to prevent people at risk for influenza complications from catching the flu from someone (like you) and getting really sick. We're talking pneumonia, bronchitis, sinus infections, and other nasty illnesses, and sadly the death rates for issues stemming from the flu are really high. No one wants a Contagion-style flu pandemic on their hands.

It keeps you from getting the flu, duh
The flu vaccine, while its effectiveness varies, can actually -- surprise! -- prevent the flu. This means, at the very least, that you don't have to waste vacation days on your pillow castle after the sick days run dry, you don't have to terrify transit passengers with your sneezes on the way to your doctor, and you don't have to feel like crap for two weeks. If you're in a group that's at high risk for complications, getting a flu shot will hopefully help you avoid even more serious problems.

More: Everything You Need to Know About Not Getting Sick This Winter 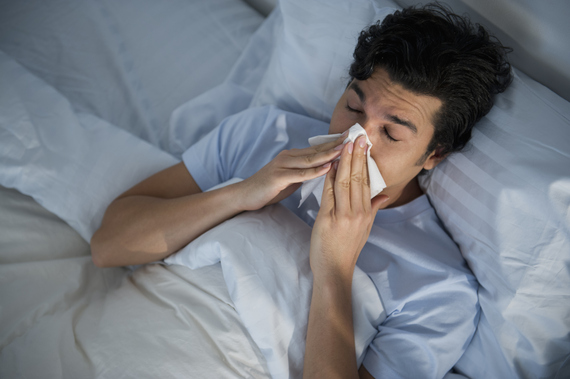 There can be negative reactions
Like most vaccines, the flu vaccine can have side effects, some of which may, alarmingly, feel like the flu. Before you start cursing out your doctor or pharmacy nurse, listen up: The vaccine didn't give you the flu. You may feel achy or feverish, but it's only going to last about two days versus two weeks. If you do get the flu, it's either because you picked up the virus before the vaccine started working (it takes about two weeks), or the vaccine didn't match the flu virus that ended up going around.

The vaccine does have risks, though. Some people have allergic reactions, and it's possible that the flu vaccine can induce Guillaine-Barré Syndrome, a fun little condition that causes weakness or even paralysis. Anti-vaccine groups tend to bring up the issue of thimerosal, a mercury compound that's used as a preservative in vaccines, which these groups link to autism, among other adverse reactions. There's no real evidence of this, though, and all things considered, the rewards probably outweigh the risks.

It won't always work, but it can still save lives
The effectiveness of the vaccine is different every year, and this isn't a matter of a few percentage points in variation. Over the past decade, the vaccine effectiveness ranged between 21% and 60, which, like, 21%? Come on! Plus, concerns have been raised recently that those the vaccine becomes less effective when you get it every year. So... nearly an 80% failure rate combined with reduced effectiveness over time? What are are these public health professionals smoking?

Well the flu vaccine is still estimated to have saved more than 40,000 people's lives during this period. We're working with a pretty giant U.S. population, so every little bit counts, a lot.

You also have to keep in mind that designing the vaccine is a tough job. If you check out an illustration of the flu virus, it looks something like a Koosh ball with a variety of spikes on it. Every year, the spikes on the virus are a little different, which means that your body needs to learn to make a new type of antibody to fight it. The flu folks at the World Health Organization announce their top three guesses at what the following season's top three viruses will be in February. The WHO doesn't mess around, and this is an extremely educated guess if there ever was one, but working with predictions several months out is bound to produce some failures.

To find out what other factors you should keep in mind, get the full story at Thrillist.com!

What You Should (and Shouldn't) Eat When You're Sick

Signs You're Stressed and Don't Even Know It