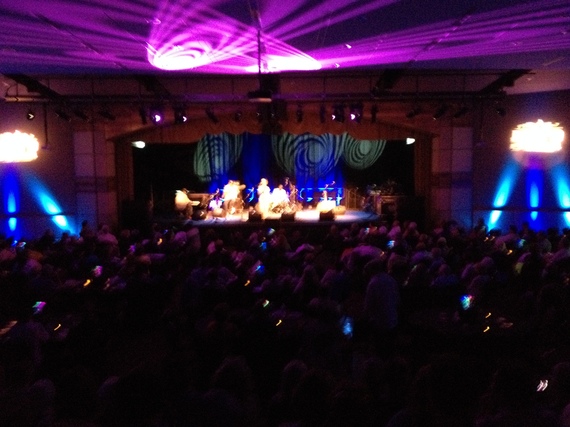 Some persons apparently see conversation in geometric patterns or concepts in numerical forms. Color reflecting music or ideas is perhaps the most frequently described form of synesthesia, a phenomena long recognized but only more recently rediscovered. Synesthesia has been frequently associated with the creative process, but is it something limited to a select few or perhaps it is inherent but yet unlocked to many/all of us?

It is probably no coincidence that synesthesia and music are frequently associated. Musical talents such as Duke Ellington, Itzhak Perlman, Billy Joel, and Pharrell Williams have been "diagnosed" as synesthetes, but Mo Sacirbey who is not a musician sees music in colors and patterns as much as he hears it. My guess is that many others have synesthesia experiences but neither recognize it or seek it out consciously -- wearing sun glasses on stage like Bono may be part of preserving the inner vision from bright lights. Color synesthesia may be the most commonly recognized since the time of the Classic Greeks, particularly as hues may be linked to numbers, letters, or even musical notes. Some see the latter as aiding in a "more perfect pitch." However, synesthesia has been recognized in other forms, and it goes beyond the bounds of what we may traditionally identify as artistic.

Nikola Tesla is one of many scientists/inventors who was a synesthete. Ambassador Muhamed Sacirbey has described how he saw diplomatic negotiations in the form of interactive geometric forms. Proposals and concepts are translated into numbers. The notion of "Clintonian triangulation" presumes a compromise but perhaps it's more than geometry. As Ambassador Sacirbey describes his friend Bill:

Clinton weaved his politics, diplomacy, music and charisma into a trigonometric rainbow harmonizing a shared future - Bosnia & Herzegovina perhaps coincidentally is a triangle but interests are not so much in search of triangulation but recognition of such a shared future.

(See photo below - "Pink Floyd" cover Dark Side of The Moon.) However, because synesthesia was for a period in the mid-20th Century subject to conformist assault, it also became associated with some mental abnormalities. While women are also synesthetes, the pressure of conformism or even stigma may be different between the genders. 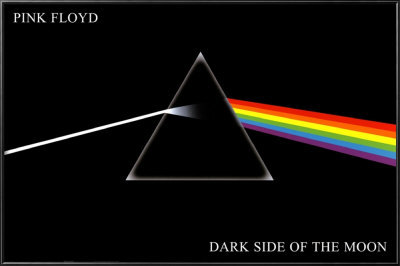 Synesthesia has been defined as "a neurological phenomenon in which stimulation of one sensory or cognitive pathway leads to automatic, involuntary experiences in a second sensory or cognitive pathway" although it also states that "difficulties have been recognized in adequately defining synesthesia." Maureen Seaberg, a synesthete as well as renowned journalist, wrote perhaps the most compelling book on the theme also further cracking the door on our understanding and study, "Tasting The Universe".

Have you ever wondered how your pet dog or in my case - cat - knows that you are arriving even before you open the door or your car engine can be heard? Animals have been documented as having another sense in anticipating natural phenomena such as tsunamis and earthquakes. But can a color blind dog be a synesthete or associate colors with the alphabet - well....? Maureen cites evidence that all animals from dogs to humans may have the capacity to communicate non-verbally to each other, perhaps telepathy or at least in our intentions toward another. Consider mirror touch synesthesia described by Wikipedia "where individuals literally feel the same sensation that another person feels... People with this type of synesthesia have been shown to have higher empathy levels compared to the general population." Empathy though is shared by all animals, and not just humans, and perhaps more respected as virtue by non-humans. While other animals may be baffled by the unknown, we humans may be stymied by the known or conventional wisdom which become our borders.

Our capacity may be way beyond the boundary we limit ourselves or animals to; it could already be within us but waiting to be unlocked. Father of modern synesthesia research, Dr. Richard Cytowic, believes that all people are synesthetes, but that some of us experience a "conscious bleed" and can speak of it.

Synesthete author Maureen Seaberg and savant Jason Padgett's newest book, "Struck by Genius: How a Brain Injury Made Me a Mathematical Marvel" features real-life Padgett who was mugged and suffered traumatic brain injuries. However, a tragic accident transformed him into a person whose inner vision, synesthesia, was unlocked in amazing ways. (The book is most worthy of a read and it has been optioned for film by Sony. Michael Costigan and Channing Tatum will co-produce.)

I'm not a synesthete, at least as far as I know. Unlike my husband "Mo" (Muhamed Sacirbey) who has been accused by former teammates of playing American football as if without a helmet, I have not been blessed with a blow to the head or some similar event to reveal me a synesthete. There is some notion that synesthesia diminishes with age, but perhaps it is more that conventional wisdom begins to define our vision. Synesthesia is not contrary to science but only extends what we understand of our universe. Synesthesia, a compelling journey to our inner eye!

While we never spoke about it, yes, Bono must be a synesthete. You can see, feel, and taste so much of the music and recognize how the visible reality can also blind to the rest: "City of Blinding Lights"