A recent poll found a surprising number of Americans call their answering machine during the work day to talk to their dog.

Many hold birthday parties for their dogs, give them Christmas presents and let them sleep in the family bed. It's no dirtier than sleeping with a shoe, says one canine sleeper -- especially when you kiss the dog on the mouth, too, which half of polled dog owners admit to. 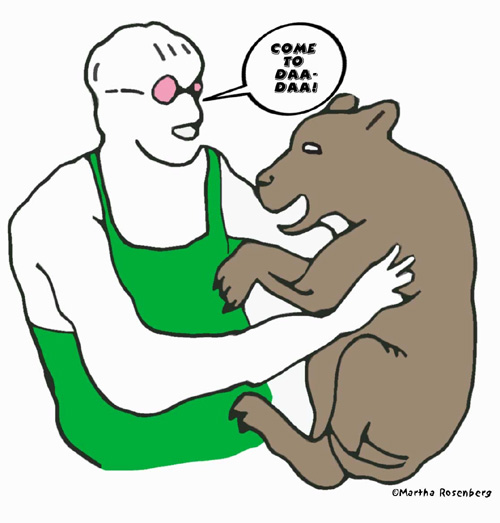 Over the last few years, dog books like "Merle's Door," "Marley & Me," "Good Dog. Stay" and "Rescuing Sprite" have been the rage. But humorists have been riffing dogs for years.

Columnist Erma Bombeck used to say dogs were the last of the optimists. They rush to the door when the bell rings but it's never for them. And they can't wait to go for a car ride even when they never go anywhere but to the vet.

U.S. comic Gary Shandling observed that the only thing a dog likes more than getting in the car is getting out, and if we opened both doors they'd tunnel through all day if we let them.

Comedian Buddy Hackett used to recount hearing the dog yawning at the edge of the bed while he and his wife were getting busy. "Am I boring you," he asked the dog in jest. "A little," replied his wife.

And of course Woody Allen recalls asking his mother where babies came from and she replied, "Dogs," thinking he'd said rabies.

While Lassie, Rin Tin Tin, Old Yeller, White Fang and even Benji were brave and heroic figures, Snoopy from the cartoon "Peanuts" introduced the era of the sage and sardonic dog who was more philosopher than pet.

That's when names like Rover and Fido retired -- who remembers "master"? -- and the dog moved to the foot or head of the bed. They had daycare, websites and free bowls of drinking water in front of stores when they walked down the street. Outrage at puppy mills began.

But there's another reason for Americans' rising love affair with dogs: the falling success rate of relationships. Marriages and relationships often don't last as long as a dog's life anymore, leading to bitter custody suits over Jake or Max.

In fact, fewer people say "what was I thinking?" about adopting a dog from the local shelter than they do about rushing into a relationship with the proverbial U-Haul in tow by the third date. Unlike the ex-partner, the dog turns out to be free from in-law and spending problems. He's not moody and self-righteous. And he's a better sleeper too.

Born With a Junk Food Deficiency: How Flaks, Quacks, and Hacks Pimp the Public Health
by Martha Rosenberg