Do you get an occasional headache? Does your back or shoulder act up now and then? Like millions of Americans, you have probably suffered for years from a previously unnamed condition known as MAP (minor aches and pains). 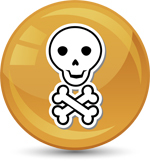 Finally, there's not only a disease name for this dread condition, but a treatment for it: MORTIFY™ (2-acetoxybenzoic acid), the little beige pill with the big profit margin from your friends and family at AstroLucre Pharmaceuticals.

Why MORTIFY™?
MORTIFY is different from the dozens of meds you're already combining now, such as aspirin, NSAIDs like Naproxen, and even your Best Friend Forever, OxyContin (oxycodone).

That's because MORTIFY takes advantage of a recent organic chemical breakthrough, known as Yellow Valence, which was originally discovered by government researchers using your tax dollars. For your benefit, this breakthrough has been PRIVATIZED™ by the good folks at AstroLucre.

Yellow Valence combines the power of morphine with the speed of methamphetamine directly into your brain's dendrites and axons to kill, kill, kill that pain! And unlike with other, weaker painkillers like Fentanyl, there's no messy myelin sheath.

How can MORTIFY help me?

Freed from the chains of MAP, you can Live the Life You Have Imagined. Achieve the goals that you and your family never dared hope you could actually reach because of MAP...thanks to MORTIFY!!

With the help of MORTIFY, you can once again enjoy even the smallest everyday things you used to be able to do, such as that special, quiet moment alone in your backyard with loved ones.

Now every day of your life can hold new pleasure and meaning for you and every member of the family. Finally, a chance to live a few hours---or even days---longer. Coming soon: MORTIFY for Dogs Who Need to be Put Down.

Special thanks to Pinelawn Memorial Gardens for their unique contribution to the clinical trials. AstroLucre Pharmaceuticals would like to thank all of the selfless MAP sufferers who gave their lives for the sake of science and price-to-earnings ratios during the clinical trials of MORTIFY

Note: You cannot purchase MORTIFY at a lower cost from Canada, nor can its price be negotiated downward for you and millions of others by your Medicare plan, thanks to the Medicare Modernization Act of 2003.

About this satirical ad
Are you sick and tired of prescription drug ads similar to this satirical ad for MORTIFY, a fictional drug? The pharmaceutical industry spends an estimated $4.5 billion per year on ads like this, fueling the increasing cost of drugs.

Consumer ads for prescription drugs were long ago outlawed almost everywhere. Today, they're legal in just two countries: The US and New Zealand.

Good news: The American Medical Association just recently voted to ban Direct to Consumer Advertising of prescription drugs. Now it's up the the FDA to act. You can contact the FDA here.