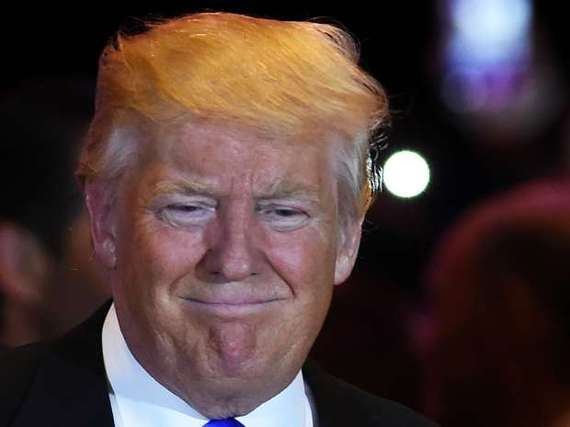 The symptoms start seconds after I awake in the morning. Like an addict reaching for his pain meds, I fumble for my iPhone and scroll through my feeds for the latest news about Donald Trump.

I scan for words like "lies," "fledgling campaign," and "raccoon hands." Each time I see them a little pleasure center ignites in the frontal lobe of my brain.

But the high is fleeting. As I get ready for work, I flip through the morning news shows hoping for a juicy story on Trump's declining poll numbers. Left-leaning political podcasts are the soundtrack of my morning commute. At the office, I check my social media feeds again. I suffer from a psychological disorder nobody but me calls OTD or Obsessive Trump Disorder.

Some signs and symptoms:

It works like this: First, I must know what Trump did wrong. Then I need to know what other people think about what he did wrong--and how this will adversely affect his candidacy. When I'm not fully satisfied with that feedback, I need to hear more negative news about Trump.

And thus the cycle continues--an endless loop of joy and pain, sunshine and rain.

I wondered if I was alone in my OTD. Is it one of those silent diseases that sufferers are too ashamed to talk about, but actually cripples hundreds of thousands of people every day?

So I phone Eli Karam, Ph.D, a clinical therapist in Louisville, Kentucky. He's level-headed and sharp, with just the right amount of ambivalence towards Trump to be the objective voice I need to hear. To my surprise, he tells me that my self-diagnosed neuroses isn't so far from an actual real thing.

"A true sign of OCD is that you have an obsessive thought that you can't get rid of," he explains. "So you develop a ritual to get that thought out of your head."

For a person suffering from germ phobia, that ritual is hand washing. For a person with OTD, it's obsessive checking and re-checking every available screen for bad news about Trump. Dr. Karam's explanation helped shed light on what I was doing, but I still didn't know why I was doing it. Germaphobes (like Trump, ironically) are driven by a fear of being exposed to germs. What was my fear? I didn't have to dig deep into my childhood to figure it out. The answer was right there for all to see, like a huge tuft of orange hair.

"The idea of a President Trump is so terrifying, that you look for negative things about him in the media to convince yourself that he's not going to be elected."

Can you blame me? While Trump is an underdog, this thing is far from a done deal. None other than Michael Moore predicts Trump will win. Experts point to Brexit as an example of what could happen here. The debates are still a month away, and they could radically change the race. Then there are those deleted Hillary Clinton emails. Just writing that last paragraph makes me want to type "Trump" and "woefully unprepared" into Google and read every article that pops up. I wish I could jump in a DeLorean and time travel into the future, so I would just know what happens. This is textbook OTD. "You can't stand being in limbo," says Dr. Karam. "So to function, you try to find enough sources to confirm what a tyrant and narcissist Trump is." That's why people with OTD need their fix. The ambiguity of the election is just too overwhelming to handle sober. Ok, fine. I get it. I got a fever for more Trump. So what's the prescription? "It's never cold turkey," says Dr. Karam. "You need to undergo a systematic desensitization." In laymen's terms that means I need to gradually limit my exposure to the things that are causing my OTD in the first place--my phone, my laptop, my TV, my tablet. Basically if it glows, it goes. Dr. Karam encourages me to switch up my routine. Instead of waking up and looking at my phone, I should go to the gym. Instead of listening to political pundits, I should listen to Headspace . "Taper down your Trump intake to 15 or 20 minutes a day." Lastly, I need to accept what I can't control. "You're not going to figure this out until the second week of November," says Dr. Karam. "You only have control over one thing--the way you vote." Punching that hole repeatedly for Hillary Clinton on November 8th is one obsessive compulsion I will gladly tolerate.