"You can kill me as soon as you like, but you cannot stop the emancipation of women." These are reputed to be among the last words of Táhirih before her executioner strangled her in 1852.

As Bahá'ís around the world prepare to observe the 166th anniversary of the Martyrdom of the Báb, the Herald of the Bahá'í Faith, I think about the Báb's many followers who were also killed for their "heretical" beliefs. In particular, I think of Táhirih.

Táhirih (c. 1814-52) has become legendary, and rightly so: her accomplishments in the face of a misogynistic environment appear superhuman. The profusion of her names and titles testifies to the difficulty of trying to encompass her identity in a single description. Her birth name was Fátimih Barágháni. She was also known as "Zarrín-Táj" ("Crown of Gold"). A spiritual leader named Siyyid Kázim Rashti gave her the title "Qurratu'l-'Ayn," meaning "Solace of the Eyes." Later, Bahá'u'lláh, the Founder of the Bahá'í Faith, entitled her "Táhirih," which means "Pure One."

Born in Qazvin, Iran, Táhirih received a better education than most of her female contemporaries, attaining expertise in Islamic theology. She was married at age 14 and had three children. But she didn't settle into domestic quietude; instead, she sought answers to her religious questions, which eventually led her to accept the Báb's message that humanity stood on the threshold of a new era. She wrote poetry in praise of the fresh spiritual revelation, which has recently been published in English, but she was best known for her brazen speech. As she traveled around Iran, she would invite clergymen to debate theology. And she wasn't any less brash in the company of her fellow Bábís: at the Conference of Badasht in summer 1848--nearly coinciding with the Seneca Falls Convention -- she came before her coreligionists unveiled and announced the abrogation of old religion and the dawn of a new divine dispensation. In ringing words, collected by Nabíl-i-A'zam in The Dawn-Breakers, she declared,

"Verily, amid gardens and rivers shall the pious dwell in the seat of truth, in the presence of the potent King." [a verse from the Qur'án] ... I am the blast of the trumpet, I am the call of the bugle! ... I am the Word which the Qá'im is to utter, the Word which shall put to flight the chiefs and nobles of the earth! ... This day is the day of festivity and universal rejoicing, the day on which the fetters of the past are burst asunder. Let those who have shared in this great achievement arise and embrace each other.

The story of Táhirih's courageous life inspired Western women who converted to the Bahá'í Faith. Isabella Grinevskaya (c. 1864-1944), a Russian writer, was probably the first of these women to take up Táhirih's story. She wrote a poetic play about the Bábí movement with Táhirih as a protagonist. The play concludes with a scene that, while fictional, is nevertheless stirring. A group of women follows Táhirih's example, removing their veils and coming forward to assist her with the Báb's interment. When Grinevskaya's play was staged in 1904, audiences adored it. Even Leo Tolstoy praised it.

The American Laura Clifford Barney (1879-1974), compiler of an important Bahá'í book, Some Answered Questions, was likely motivated by Grinevskaya's work to write her own play about Táhirih. Entitled God's Heroes, this play was published in 1910, and today can be read online. Barney presents Táhirih as not only a champion of the Báb but also as a leader of women's liberation. 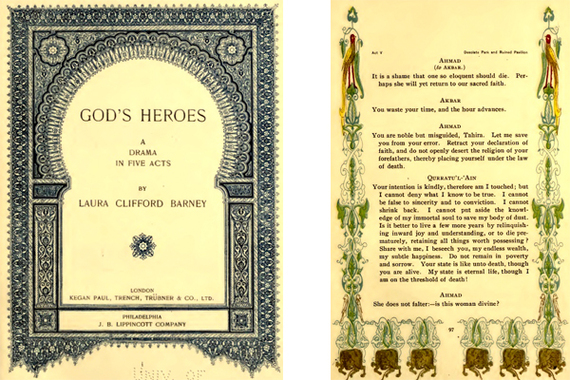 Martha Root (1872-1939), an American who traveled around the world for twenty years to spread Bahá'u'lláh's message of peace, embraced Táhirih as her spiritual foremother. Root spent a decade writing a biography of Táhirih, even traveling to the Barágháni family home in Qazvin to conduct research. In 1938, she published Táhirih, the Pure, which is now available online. The biography testifies to the network of global sisterhood generated around Táhirih's legacy. Root opens the book by claiming, "It should be of thrilling interest to [women] to know, ex oriente lux, that the first woman suffrage martyr was not a Westerner at all, but a young woman poet, Táhirih..." 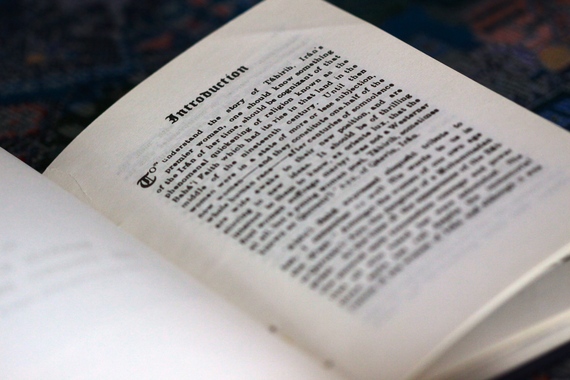 The first page of Martha Root's book about Táhirih.

Táhirih's story continues to inspire. In 1997, attorney Layli Miller-Muro founded the Tahirih Justice Center -- an apt name for an organization that works to protect the rights of women. A few years ago, Janet Ruhe-Schoen released the biography Rejoice in My Gladness: The Life of Tahirih. Last year, Bahiyyih Nakhjavani published The Woman Who Read Too Much, a novel based on Táhirih's life. No doubt future years will see even more creative and scholarly work on this unique spiritual leader. As Laura Barney wrote at the end of God's Heroes, after Táhirih has been strangled and thrown into a well,

Do you think that you can bury her there? She will reappear, and be ever before you all! You have rendered her immortal in the minds of men, and her spirit of love will be transmitted to millions of living hearts. You have undone your work and have established her fame. Forever after Tahira [Táhirih] will inspire courage and sincerity and truth! (p. 101)