When I first moved to New York City in 1979, I lived in Greenwich Village, a mere two blocks from the Bottom Line. My roommate worked there as a waitress and it was my "local" -- I hung out there at least once a week and saw amazing artists put on spectacular shows. I also saw household names in the audience many a time, and one of those people was Doc Pomus. I was too nervous to approach him, but I basked in his glory, absolutely thrilled and entranced to see him in person.

As part of Lincoln Center's Midsummer Night Swing 2014, the redoubtable jump-blues band Roomful of Blues will honor Pomus tonight in a specially designed open-air ballroom at Damrosch Park, located on West 62nd Street between Columbus and Amsterdam Avenues. This follows on a free screening two nights ago of the award-winning film AKA Doc Pomus at the Elinor Bunin Munroe Film Center Amphitheatre.

Count Basie once called Roomful of Blues "the hottest blues band I've ever heard" for their horn-driven blend of swing, jump, R&B, rock and soul. This year marks their 46th year of getting folks up and dancing. Pomus first saw them in 1976 and became one of their biggest champions, producing their first demos. This led to a recording contract with Island Records. 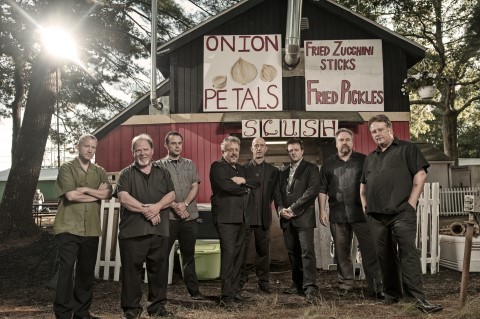 Roomful of Blues (used with permission)

Pomus was quite simply one of the most brilliant songwriters of all time, writing "Save the Last Dance for Me," "This Magic Moment," "A Teenager in Love," "Viva Las Vegas," and dozens of other hits. For most of his life Doc was confined to crutches and a wheelchair, but he lived more during his 65 years than many of us could in several lifetimes. Besides Roomful of Blues, Pomus also acted as a mentor to many songwriters as well as an advocate for the rights of destitute rhythm and blues musicians. If the music industry had a heart," said legendary producer Jerry Wexler, "it would be Doc Pomus."

Save the Last Dance For Me: Roomful of Blues Plays the Music of Doc Pomus Jump Blues, Rhythm & Blues, Rock 'n' Roll takes place tonight and, besides Roomful of Blues' performance, will also feature Lindy Hop dance lessons from Paolo "Pasta" Lanna. Phast Phreddie the Boogaloo Omnibus will serve as DJ. There will also be a special dance performance by American DanceWheels Foundation after Roomful of Blues' first set.

There can be no better way to celebrate the magnificent, New York summer-centric music of Doc Pomus than at one of the beating hearts of Manhattan's culture scene, Lincoln Center.

Midsummer Night Swing is a ticketed event. The dance floor opens at 6:00 pm, followed by a dance lesson at 6:30 pm for all skill levels. Lessons are included in the price of admission. Live music and dancing begins at 7:30 pm and goes until 10 pm. The Swing box office is located in the lobby of Avery Fisher Hall at Broadway and 65th Street. Tickets can be purchased in advance at the Avery Fisher Box Office or beginning at 5:30 pm on the night of the event at the box office in Damrosch Park. Tickets and series passes can also be purchased through CenterCharge, 212-721-6500, or at www.MidsummerNightSwing.org.