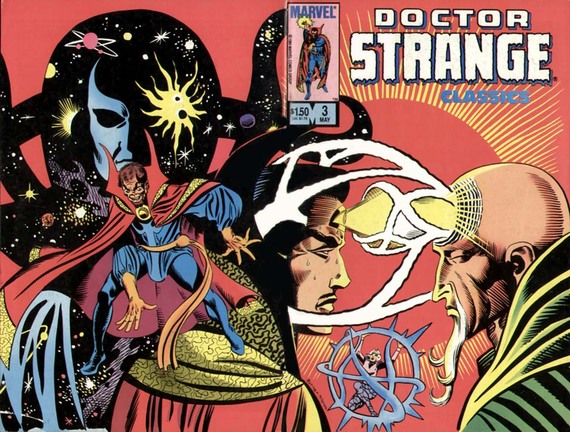 In 1963, Stan Lee and Steve Ditko introduced Marvel's Doctor Strange, a "different kind of superhero" who practiced Occultism and held quasi-Buddhist views that he learned from an "Orientalized" figure named the Ancient One.

What can a half-century's worth of this odd superhero's comic books tell us about representations of the "mystic East" in American popular culture? According to comics historian Bradford W. Wright, quite a bit:


Just as each generation writes its own history, each reads its own comic books. The two activities are not unrelated, for comic books are history. Emerging from the shifting interaction of politics, culture, audience tastes, and the economics of publishing, comic books have helped to frame a worldview and define a sense of self for the generations who have grown up with them ... To critically examine the history of comic books is to better understand the changing world ... as well as the historical forces intersecting to shape it. (2001, XIII)

Stan Lee's disregard for maintaining any semblance of geographical consistency was permissible because, at that time, neither accuracy nor consistency was particularly relevant. It was these symbolic representations, including the Ancient One's name, his facial features, and his attire that the audience recognized. It was this symbolism that "proved" Strange's religion was "authentically" Asian.

As the proto-psychedelic art of Steve Ditko transported Doctor Strange through increasingly complex alternate realities, the audience demographic expanded in an equally complex manner. It was no longer just children and teenagers who accompanied Lee and Ditko as they soared through alternative realities that, visually, looked unlike anything else in the medium:


Steve Ditko contributed some of his most surrealistic work to the comic book and gave it a disorienting, hallucinogenic quality ... Dr. Strange remarkably predicted the youth counterculture's fascination with Eastern mysticism and psychedelia ... an audience seeking a challenging alternative to more conventional superhero fare. (Wright 2011, 213)

After Lee's and Ditko's run, the novelty of Doctor Strange wore off. In danger of cancellation, writer Steve Englehart and his illustrator, Frank Brunner, took the character in an entirely new direction. In an interview with Jon B. Cooke (1999), Brunner explains Doctor Strange would spend less time battling monsters and more time blowing minds (Marvel Masterworks 2011, vol. 5). As Spider-Man battled "to save our lives ... Dr. Strange was in the ultimate battle for our very souls!" (1999).

Though the Brunner/Englehart collaboration was short-lived, it is widely regarded by fans and industry artists/writers alike as the most politically daring, philosophically complex, and most influential in the series' fifty-year history. Comics author and illustrator John Bryne (2008) writes:

Under Steve Englehart's run in the 70's ... you get a Doctor Strange who is interested in the occult roots of America [and] alternate realities. Englehart had a very significant impact on Doctor Strange.

Brunner and Engleharts' Ancient One challenged a predominantly Christian culture and provided an alternative worldview, but as Jane Iwamura notes in her Virtual Orientalism, a "religious and racial hierarchy" was maintained (Iwamura 2011, 20). Doctor Strange, the white hero, saved the world and "enlightened" the Oriental Monk, who was too weak to stave off an intergalactic beast. Though Englehart's Ancient One did propound views more closely resembling those of a Tibetan lama, his Buddhist-esque philosophy was based on Englehart's knowledge of Occultism, developed from reading books that drew heavily from tantric Buddhist doctrine and praxis.

By 2005, Marvel's new cinema-centric philosophy focused on re-imagining classic characters such as Doctor Strange, whose monthly serial had long been cancelled due to a decline in readership. Early on in this more realistic redux, the audience began to wonder if the Ancient One would train Stephen Strange in actual Tibetan tantric traditions, but this is not what happened. Instead, as the series unfolded, Strange returned to the United States and the serial began reading like the then-current box-office sensation, the Matrix. The Ancient One re-appeared in New York City, dressed as an Asian version of Morpheus, and when Trinity's doppelganger re-introduced him to Strange, it was just as Edward Said once said, "The Oriental is always like some aspect of the West" (2003, 67).

When this attempt failed, the makeover project was handed to Brian Bendis, the writer who created the Spider-Man featured in the box offices sensations. In successive issues of Bendis' New Avengers, Strange joined the Avengers and lost his powers along with the title of Sorcerer Supreme. In no time at all, Bendis had rendered impotent the once all-powerful superhero, while mocking Strange's past association with Eastern practices. Though Bendis eventually restored some of Strange's powers, his successor, Matt Fraction, transformed Strange into a perverted old professor who was afraid of dying alone.

From 1963 to the present day, Doctor Strange comics document a visual history of American pop-fascination with the "Orient," and with Tibet in particular. During the early 1960s, Tibetans were more exoticized objects of wonder than actual persons, and thus the Ancient One better resembled Blavatsky's Mahatmas than he did a cave-dwelling Tibetan yogi. As the counterculture critiqued America's Protestant heritage and explored religions from the so-called "Orient," Englehart and Brunner destroyed God and presented their own version of a Buddhist-esque occult philosophy, which they and their readers put into practice. By the turn of the millennium, the XIV Dalai Lama had become a household name and images of Tibet and its people were widely available to the many Americans with internet access. Doctor Strange's Tibet became more visually consistent with these images, and the serial mimicked a pop Buddhist-inspired philosophy of the Matrix, which perhaps appealed to the more "hip" spiritual seekers. But by the time this iteration of Buddhism was fully commercialized and sold as an alternative lifestyle, the same counterculture youths who once read Englehart had raised children who mocked their hippy parents.

Should the de-exoticizing of Tibetans in the comic serial be interpreted as progress? Is the ease with which revered Buddhist practices are mocked an indication that we are eliminating much of the humanity remaining in our culture, including that of the Americans with hopes, fears, and evolving worldviews interested in the religions of other persons with hopes, fears, and evolving worldviews?

I asked these questions to my students. Here are some of their responses:

This post is based on an article, "The Dharma of Doctor Strange," originally published by Implicit Religion. You can also find the lengthier article here.

Scholar of Buddhism and Religion in American pop culture, founder of New Gods.