Just like the British television program produced by BBC, my father was a universal explorer who, through travel and the use of science and the metaphysics, time-traveled back into paranormal history. As with Doctor Who, he too, faced a variety of foes while working to save civilizations, help people, and right wrongs. He just did it on a broader scale in which he touched upon modernizing a huge portion of the research of the supernatural, entering into the beginning of the Spiritual Movement.

At any given time, he would cover subject matters such as the occult which included witchcraft, witches (black and white magic), voodoo, spells, astrology to healing and then back to ghosts, apparitions, negative entities, mediumship, mediums, psychics, UFO's, ET's, MIB, curses, cultures, cave drawings, humanoids and Nessy. He had his information about Sasquatch but as he was a Manhattanite for the later part of his life, he decided to leave the big hairy guy up to other folk. He wasn't very interested in The New Jersey Devil as urban legends weren't his cup of tea as much as the reality of someone claiming an interaction with the other side or from outer space. After all, I believe one could honestly say, after looking back on his sixty-plus years of service and humanitarian work for the field of research, he was allowed to let one or two issues be dealt with by other researchers, no? He truly was the only one who explored a wider range of territory and yet still continued his fascination from his ancient antique coin collection to collecting books of all sorts written by others on a variety of topics from flowers to sex.

Today, more then ever we need to get back to In Search Of as the paranormal has taken another pop-culture upsurge. As father was part of one of these upsurges, now so am I. Except my turn is a bit rougher around the spooky edges. I am confronted with my own demons of trying to be heard as a woman in the paranormal arena carrying a semi-skeptic mind and open heart believing in some but not all topics for this universal field that I am very much part of, if anything, by birth right alone. In Search Of used to be three of the most known words when it came to television and the mysteries of the unknown in the early 70s. The familiar sound of that creepy, lead-in themed music you heard as you were about to embark on a journey narrated by the deep voice of actor and singer Leonard Nimoy. These are the three simple words that depicted the very first reality TV show, which my father was an integral part of on and off the screen. So why are our youth today asking ... who is Dr. Hans Holzer? 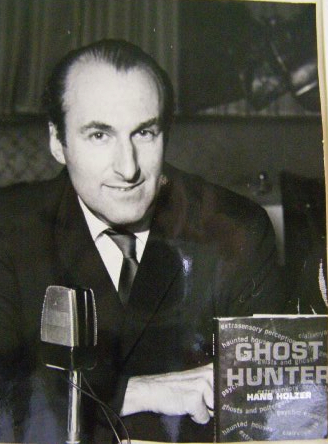 Dr. Hans Holzer with first published book, Ghost Hunter in 1963, that went into over eleven printings, leading to a TV show Ghost Hunter. Where do you think they get this stuff for today's shows circa early 2000's?

Evolution is all par for the course in the field of any job function, human living and growth. We must embrace change and new information. However, in the same vein, we must also preserve our history and utilize its findings as they still apply to that evolution. It is not to be thrown away like yesterday's garbage because we are in a high-tech era. You can have it all if you balance it and more importantly, embrace the respect factor and stop with the egos and pretentious attitudes that I encounter often. You need only look at Hans' body of work in the department of literature (publishing over 145 titles, 25 plus reprints and bestsellers), TV appearances, documentaries, radio (New York's WOR with Joe Franklin). He constantly did public speaking at colleges world-wide as an effort to teach off-camera. To grasp his more than 60-year contribution to the paranormal field and the creativity that he had an abundance of, one must see the off-Broadway musicals he composed (one is currently in pre-production, a Greek sex comedy) as well his screenplays of fiction and nonfiction, poetry, music, filming and photography. He has been reposted, written up, and televised on your top talk shows from different eras from Merv Griffin to Regis Philbin.

Father was one of many talented artists who escaped pre-war Europe in 1938 and found refuge in the theaters of New York City.  As a gifted playwright, author, composer and investigator he captured the imagination and hearts of many around the world with his wit and unique theatrical style. Some of his admirers included personalities like Steve Allen, Johnny Carson, Regis Philben, Mike Douglas, Art Linkletter, and Leonard Nimoy.

He was known worldwide as an expert on extrasensory perception and for his numerous books and publications on the paranormal and supernatural. His book, Murder at Amityville, detailing the possession of Ronald DeFeo Jr. by the ghost of an Indian Chief in Amityville, NY, spawned no less than two major motion pictures (The Amityville Horror series). He was also familiar to legions of his fans as a playwright and composer, as well as a part-time archeologist and an avid student of ancient history. He went off of both factual and theoretical findings in his work -- or what today they're calling Fact or Faked in one of the shows. It's nowhere close to the point of serious intelligent research and colleagues that can form sentences that will make you dizzy for a week! Entertainment came after hours with great hearty, robust conversations and that is what I grew up around. Yes, there were film crews, cameras, lights and plenty of action but there was also substance, style and sophistication. 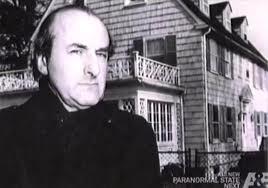 He has done all radio and when I say radio ... I mean radio not internet. He was been interviewed for magazines and newspapers from the prestigious New York Times to the New Yorker and everything in-between. He contributed articles for Manhattan's finest magazines as well as the long-time running Fate magazines plus other little 5x7 booklets like Reader's Digest, Borderline, Exploring The Unknown, Mystic Magazine and on and on his writer contributions went. He rubbed elbows with the classiest of class from old-school Hollywood actors, musicians to other authors and intellects alike as he was in praise of many, not just himself. He. .. he ... he well let's get formal about this, shall we? He was asked on a global scale for his expertise, opinions, thoughts, validations, arguments and physical presence in the supernatural. He was ahead of his time and much of what today is still being used came from his mind, heart and soul. If it was weird or unexplained, he found "it" or "it" found him! Today, I carry this on my back but not without sideways looks, muttering under one's green-eyed monster breath and competitive nature that I see more from the men than the gals. There is much controversy in the field so please keep it out with those of us who truly are here to stay and aren't looking for our next close up, Mr. Deville.

Part II of my 'In Search Of' Dr. Hans Holzer in Paranormal History continues next post: Hans Holzer, the man BEHIND the Ghosts.