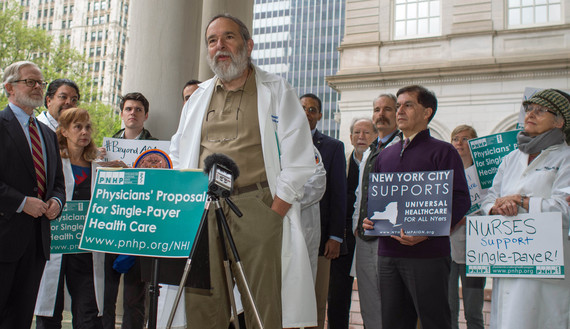 Dr. David Himmelstein speaks at a news conference about the new Physicians' Proposal for Single-Payer Health Care on the steps of City Hall in New York, May 6. Photo: Annette Gaudino

Many months before Bernie Sanders entered the presidential race, we (along with Dr. Adam Gaffney, an energetic younger colleague, and Dr. Marcia Angell, the former editor of the New England Journal of Medicine) convened a nonpartisan group of 39 leading physicians to envision health care reforms that would fix the glaring problems that remain despite the Affordable Care Act (ACA).

After the Supreme Court removed the final roadblock to the law in 2015, President Obama declared that at last "in America, health care is not a privilege for a few, but a right for all." Yet doctors on the ground knew that wasn't entirely true. We continue to see patients who dangerously delay their care because of cost concerns or insurance obstacles.

At least 27 million Americans remain uninsured, and for tens of millions with insurance, sky-high copayments and deductibles (which average $5,300 in the bronze plans sold on the ACA exchanges) mean they'd be bankrupted by a serious illness. Many more people have narrow network coverage that won't pay for care at top cancer centers or academic hospitals.

Meanwhile, giant insurers and hospital conglomerates with a single-minded focus on their bottom line increasingly dominate health care. And doctors and nurses contend with insurers' growing demands for mind-numbing electronic documentation. These trends predated the ACA, but the law accelerated them. The ACA has also fueled medical merger mania and the health system's administrative complexity and cost.

The alternative we and our colleagues developed (which has now been endorsed by 2,227 other physician colleagues) appears in the current issue of the American Journal of Public Health. It calls for radical change: a single-payer national health program, essentially an expanded and improved version of Medicare for all, much along the lines that Bernie Sanders has advocated.

The single-payer plan we propose would cover everyone for all medically necessary care -- including dental care, prescription drugs and long-term care -- without copayments or deductibles. In contrast to private insurers' narrow networks that restrict patients' choice of doctors and hospitals, the single payer would cover care from any doctor or hospital.

Our nation can readily afford such expanded and improved coverage if we replace the current wasteful patchwork of insurers with a streamlined single-payer system. At present, private insurers' take 12.3 percent of total premiums for their overhead; only 88 cents of every premium dollar ever reaches a doctor, hospital or pharmacy. And insurers inflict massive paperwork on doctors and hospitals, which spend about one-quarter of their revenues on billing and administration.

In contrast, insurance overhead is only 1.8 percent in Canada's single-payer system, about the same overhead as in our Medicare program. And Canadian hospitals have administrative costs less than half those of their U.S. counterparts. That's because Canadian hospitals are paid annual global budgets, like U.S. fire departments, instead of billing separately for each Band-Aid and aspirin tablet. Billing is also simple and inexpensive for Canadian physicians.

Overall, a single payer would save about $500 billion annually by trimming administrative spending to Canadian levels. Moreover, as in other nations, the single payer could use its purchasing power to lower drug prices, saving tens of billions more each year. These savings could fully cover the new costs of the coverage expansions we propose, a conclusion in keeping with past estimates by the Government Accountability Office, the Congressional Budget Office, and private consulting groups (including one that's owned by an insurance company).

Contrary claims, including those contained in a report published by the Urban Institute this month, are fraught with flawed assumptions and grossly underestimate the savings a single-payer system would assure.

We and our colleagues recognize that, despite widespread public support for Medicare for all, passage of our proposal is unlikely absent sweeping changes in the makeup of Congress. But the same can be said about any salutary health reform; Congress has resisted even modest tweaks to the ACA.

Yet as physicians we feel obliged to offer our best advice. Our health care crisis can be solved. We have the resources needed to provide excellent care for all Americans; an abundance of hospitals and sophisticated equipment; superbly trained doctors and nurses; prodigious research output; and generous health care funding. Yet only thoroughgoing single-payer reform can realize the healing potential that is currently thwarted by our dysfunctional health care financing system.

The authors are internists who teach at the City University of New York at Hunter College and Harvard Medical School. They co-founded Physicians for a National Health Program, a nonpartisan organization that advocates single-payer reform.

The text of this article originally appeared at The Hill.