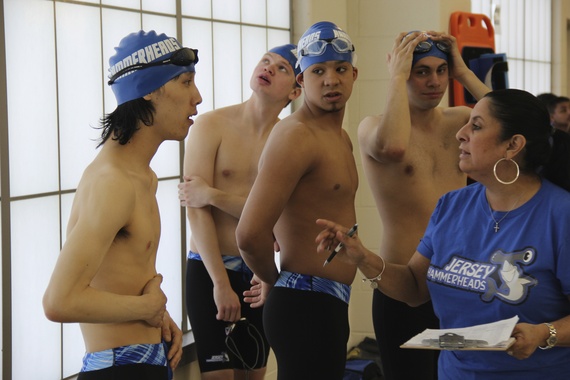 "What's your call to action?" This was one of the first questions asked of us when it was announced that our film Swim Team was chosen for this year's IFP Documentary Completion Lab. It's a familiar question for sure.

Somewhere along the line, it became important for documentary films to have a so-called call to action, particularly if these films are competing for the typical sources of funding. Some of the best known and most generous documentary funders now explicitly state or demonstrate through their choice of films that fundable documentaries must address contemporary social issues and seek to challenge the status quo, inspire people to join or create a movement, or otherwise call for social action.

But if you're making an independent documentary on an artist, any sort of biography or historical film, or something non-traditional, good luck getting support. "There's been a gradual change in the understanding and acceptance of what a documentary can be," says Milton Tabbot, Senior Director of Programming for IFP. "Although there are exceptions among funders, these days most of the films that get funding are the ones that have real strong social issues, where it's clear how the film can be used as a tool for outreach and impact. Some people are still surprised if there's a strong narrative and story."

Even our film, about a competitive swim team of teens on the autism spectrum, was dismissed by some as "not about a hard hitting social issue," and thus ineligible for support. Swim Team focuses on young people seeking acceptance in a society that takes every opportunity to segregate based on disability, and the nonprofits that we have begun to partner with certainly recognize the potential of our film to engage in a national conversation about inclusion. That said, our narrative throughline of a sports team trying to dominate the competition makes our film more difficult to categorize for some funders.

To be clear, supporting films that tackle social issues head-on isn't a negative trend. Social issue documentaries offer incalculable value towards generating real world impact. And it's not a zero sum game; films with an agenda are luring new funding to the space. As director Marshall Curry recently observed to The New York Times, "If these funders weren't funding activist films, they would be funding some other form of activism -- not some other form of filmmaking."

IFP is the rare organization now supporting independent film that embraces diverse voices, including the kind of films that may not be the obvious candidate for a grant. The documentaries IFP has supported through their Documentary Lab, Film Week and/or other channels include such outstanding films as Kirsten Johnson's Cameraperson, Keith Maitland's Tower, Tracy Droz Tragos and Andrew Droz Palermo's Rich Hill, Penny Lane's Our Nixon, Zachary Heinzerling's Cutie and the Boxer, Todd Miller's Dinosaur 13, Eva Radivojevic's Evaporating Borders, Jason Osder's Let the Fire Burn, and Amanda Wilder's Approaching the Elephant. In an increasingly competitive field, it's validating and meaningful to be chosen for IFP's Documentary Lab, and we were pleasantly surprised to discover the eclecticism of IFP's other selections.

"We support voices that might otherwise not be heard," says Tabbot. "As a programmer, I'm drawn to diversity of approaches in this artform, and above all any documentary has to succeed as cinema. If you return to a work five to ten years from now, the film should be able to stand alone as a film, not just as an issue. The issue isn't the film."

Film is a powerful medium to change people's perspectives, but impact isn't easily measured. This is true even when there's a strong social issue, but quantifying impact is doubly difficult when the film is not singularly focused on a cause and more concerned with characters, story and cinema. Nevertheless, these films have the ability to absorb and deeply affect viewers.

"Documentaries that are more cinematic, stylistically unconventional and less issue-focused retain the power to challenge audiences' views of the world, but perhaps in a subtler way," says Paola Mottura, Documentary Program Manager for IFP. "These films can change the way we perceive certain realities by drawing us into characters, making us empathize with their stories in a way that ultimately may still result in changing our attitudes towards the subject matter."

Our first week of the IFP Documentary Lab in May included a number of opportunities to learn about and discuss distribution and impact - terms that are increasingly linked in the documentary world. Funders and distributors have ratcheted up their expectations for audience engagement plans from filmmakers, making it our job not only to make the film itself but also design a campaign around its distribution to engineer its impact. If that sounds daunting, it is. As the landscape in the documentary world has shifted to favor the films that are deemed best suited to "make an impact," an enormous responsibility is placed on the shoulders of filmmakers to create films that make the case for impact right out the gate.

As we got to know the other IFP Lab fellows and discover their films, we realized that what all of our films had in common was a personal and sometimes quirky perspective on stories that have deeper and yet sometimes subtle roots in social and political issues. These issues include women's equality, mental illness, patient rights, immigration, poverty, racism and more - but none of this year's IFP Lab films seem geared to change the law, feature a ripped from the headlines story or include experts articulating issues in a talking heads style.

"It takes more work to have that discussion outside the film instead of people talking in the film," says Tabbot. But films that introduce compelling characters and communities and don't necessarily advocate or present a succinct "case" may be just as if not more resonant simply because they ask the viewer to arrive at his own conclusions.

Indeed, sometimes an intimate, character-driven story can generate tremendous impact. Tabbot believes that there's an innate excitement around more personal films that often make them more engaging, and therefore more effective at times. "Rather than approaching a topic in a very traditional way and listening to an issue again and again, it's intriguing to see artists that are trying something different," he observes.

Every documentary is a form of commentary on its subject, every documentary filmmaker's work is informed by her personal point of view. In documentary film, the personal is indeed political. As IFP Lab editing mentor Carol Dysinger said, "Every movie is a conversation with the world." So if we're paying attention to the circumstances surrounding a film's story, many documentaries reveal social issues in unexpected ways.

The late, great Roger Ebert once noted, "film is a machine that generates empathy." It's the viewers' experience of empathizing with a character in a film that can help awaken them to certain causes. By leaning on the raw power of personal, human stories, films that have deep impact may not appear to have an agenda at all, but instead tiptoe lightly towards changing hearts and minds.

Learn more about the forthcoming documentary "Swim Team" at www.swimteamthefilm.com