How to celebrate its fifth birthday? Well, if you are like us, it will be a sober affair, reflecting serious worries about the continued vulnerability of the financial system.

Let's have a look at the most noteworthy accomplishments and the biggest failings so far. Starting with the successes, here are our top five:

Together, these changes are making the financial system more resilient, but the system is still far from safe. And the reforms will not reduce the likelihood of the next crisis to an acceptably low level. Moreover, by limiting the emergency powers of the Fed (to lend to individual nonbanks outside of a program of broad access) and the FDIC (to guarantee bank debt), DF makes it more difficult to mitigate the next crisis when it inevitably occurs. We worry that this mix of inadequate crisis prevention tools and weakened crisis-mitigation authority will be a recipe for another financial disaster.

From the start, DF has contained critical holes and created mechanisms that reinforced poor incentives. It is also overloaded with costly regulations that were unlikely to make the system safer, even if fully implemented. And, because it is so complex, full implementation remains a long way from complete - even as we mark its fifth birthday. As of end-March, only 238 of the 390 required rule-makings have been completed - 70 haven't even been proposed.

What are the principal components missing from Dodd-Frank? We see six:

An early comprehensive analysis of Dodd-Frank (to which one of us contributed) already highlighted a number of these faults. Let's look briefly at each one.

Regulatory structure. The United States has a complex, incoherent and fragmented regulatory system, characterized by overlapping authorities with competing jurisdictions and mandates (see here). As one analysis puts it: "A multitude of federal agencies, self-regulatory organizations (SROs), and state authorities share oversight of the financial system under a framework riddled with regulatory gaps, loopholes, and inefficiencies. [...] failure to reorganize the regulatory structure will contribute to the buildup of systemic risk." This is not new news: a recent report documents more than a dozen proposals for U.S. regulatory consolidation since 1960, including Treasury's 2008 Blueprint for a Modernized Financial Regulatory Structure.

To see the point, we reproduce a 2004 General Accounting Office diagram of the regulators of a hypothetical financial holding company. The red additions and deletions are our attempt to bring this diagram up to date. Unfortunately, there is virtually no difference. 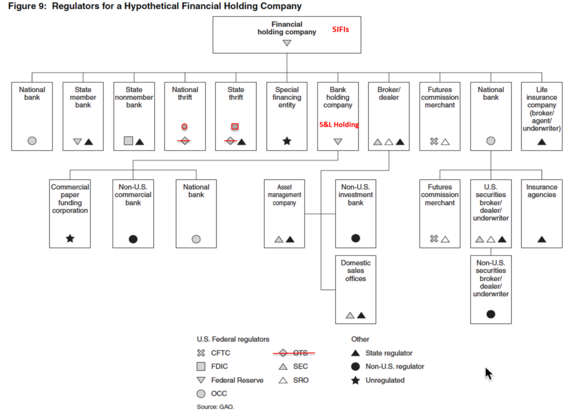 We believe that DF was a once-in-a-lifetime opportunity to simplify the regulatory process and reduce the potential for confusion and conflict. However, it did virtually nothing to alter the existing structure.

Granted, DF shut down the weakest regulatory link (the Office of Thrift Supervision). But, at the same time, it added new entities - including the Financial System Oversight Council (FSOC) and the Consumer Finance Protection Bureau (CFPB) - to the mix of federal agencies with overlapping authority. Hopes that the FSOC would be an effective coordinator of other regulators have fallen far short, most clearly in its failure to press the Securities and Exchange Commission (SEC) to enact a credible reform of money market mutual funds (MMMFs). While the CFPB is making progress in some areas of consumer protection, there are notable concerns about the limited oversight of the Bureau and about the costs of CFPB regulation (see, for example, the CFPB panel discussion in this volume).

Finally, unlike most banks, insurers continue to be regulated, supervised and guaranteed at the state, rather than the federal level (with the exception of the two SIFI-designated insurers, MetLife and Prudential). This fragmentation raises the cost of doing business across state borders and makes the financial system more vulnerable (reflecting the limited value of a state-level, rather than a nationwide guarantee). While DF introduced a Federal Insurance Office (FIO) to monitor the industry, it made no effort to modernize this obsolete system of regulation.

Government-sponsored enterprises. DF makes no mention (except to mandate a Treasury study) of the GSEs, which accounted for the largest losses imposed on taxpayers during the 2007-2009 crisis. In 2011, as a consequence of DF, the Treasury proposed mechanisms to wind the GSEs down, but there is little or no political will to scale these housing-finance behemoths back. Instead, elected officials have tacitly encouraged the GSEs to take on ever greater risks at taxpayer expense. We have in mind both the fact that nearly 80 percent of new mortgages in recent years have been backed by Fannie Mae, Freddie Mac and other government agencies (such as the Federal Housing Administration); and the move late last year to raise the maximum loan-to-value ratio on new mortgages that are eligible for guarantees to as high as 97%.

Systemically important markets. DF fails to address the fact that key financial markets are prone to runs. The market for repurchase agreements (repo) and nonbank MMMFs are the two most obvious examples. To this list, we would add many bond mutual funds and some forms of securities lending. As a bank supervisor, the Federal Reserve Bank of New York has made progress in reducing the risks faced by the clearing banks in one part of the repo world (the tri-party repo market), but the repo market as a whole still poses fire sale risks should liquidity demand surge. We argue elsewhere that the SEC's MMMF "reform" is more likely to raise, rather than lower, run risks.

Effective pricing of guarantees. DF does not ensure that the government charges a fair value for the insurance that it provides various financial intermediaries. According to the Federal Reserve Bank of Richmond's recently updated Bailout Barometer, the federal government protects losses on 60 percent of the explicit and implicit liabilities of financial firms. Unless these guarantees are fully priced - in the form of pre-paid insurance premia - then the insured intermediaries will have incentives to take risks that can threaten the entire financial system. Unfortunately, past experience - for example, with FDIC insurance and GSE support - offers little comfort.

Effective resolution principle. Here we see two issues: the poor arrangements for covering resolution costs and the misconceived approach to living wills. First, DF does not end bailouts; it just requires that taxpayers be reimbursed for the costs. Should a SIFI failure require the FDIC, as the agency in charge of its resolution, to use public funds temporarily to support a reorganization, DF calls on the FDIC to then impose fees on other SIFIs to recover these public outlays. Such ex post charges violate the basic principle of providing insurance in exchange for upfront risk-adjusted fees to limit moral hazard. If anything, the DF model of ex post recuperation of bailout expenses encourages a race to the bottom among SIFIs so that other SIFIs bear the cost of their systemic risk-taking.

Furthermore, living wills need to be re-designed to promote proper incentives and make restructuring workable in a crisis. It is useful for the people running these large institutions - which have hundreds of thousands of employees in thousands of legal subsidiaries spread around the globe with total assets in the trillions of dollars - to have a sense of what failure would mean. But it seems fanciful that a document could detail the procedures for liquidation in the case of insolvency (or, worse, in the case of multiple insolvencies). In a prior post, we argued that living wills should focus on automatic going-concern recapitalization that does not depend on public assistance. While this may not require a change in the law, DF missed the opportunity to specify such a private mechanism as the preferred approach to resolution.

Regulation by function. Aside from the potential designation of nonbank behemoths as SIFIs, DF does little to address shadow banking. Regulation based on the legal form of the intermediary - rather than on its economic function - leaves the financial system vulnerable to a future shift of funds out of the regulated sector that faces higher costs associated with capital and liquidity requirements. It is a key driver of regulatory arbitrage.

Finally, no discussion of DF would be complete without at least some mention of the things it did that pose high costs relative to the prospective reduction of systemic risk. We'll cite only two: (1) the attempt to distinguish between market making and proprietary trading in the Volcker rule; and (2) the effort to reform credit rating agencies.

The motivation behind the Volcker Rule is that institutions that attract insured deposits should not be able to use this government-supported source of funding to engage in high-stakes speculative activities. Unfortunately, there is no reliable means to distinguish between risk-taking for customers and risk-taking for a trading firm's own account. As a result, any rule that limits proprietary trading - such as a safe-haven cap on trader positions, which may be the simplest way to implement the Volcker Rule - inevitably limits market-making capacity and customer liquidity. The practical challenge is evident in the massive 882-page preamble to the final Volcker rule and in the ongoing delay (until July 2015) of required industry conformance with the rule. In our view, appropriate capital requirements are a more efficient tool for managing systemic risk arising from speculative trading positions.

With regard to credit rating agencies, DF includes a laundry list of changes, but these probably do little to diminish the incentive problems that led to the debacle of overly optimistic pre-crisis ratings. In particular, the motivation of issuers to shop for a favorable credit rating remains largely intact, along with the market power of those ratings shoppers who pay for multiple ratings (say, for the structured credit vehicles that they issue). Moreover, recent research indicates that, since DF, the informativeness of ratings for corporate debt has declined, while false warnings (in the form of speculative-grade issues that do not default) have risen.

So, how should you celebrate Dodd-Frank's fifth birthday? Perhaps by wishing - when you blow out the candles - that Congress will try do much better before we face the next crisis. Unfortunately, experience suggests otherwise.

Acknowledgement: We thank our friend and colleague, Larry White of NYU Stern, for his very helpful comments on this post.