Kudos to Chris Dodd whose third-tier-nothing-to-lose presidential campaign has sprouted him a robust pair of cojones. Dodd became the most prominent Democrat, and the first among 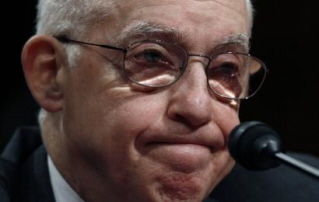 the presidential candidates, to declare he will vote against Bush nominee Michael Mukasey's confirmation as Attorney General.

Angered by Mukasey's Senate testimony last week in which the former federal judge and prosecutor floated a legal "theory" that the President of the United States could, indeed, stand above constitutional statutes, Dodd declared on Monday:

"That is about as basic as it gets," Dodd said. "You must obey the law. Everyone must."

Dodd, along with a slew of other legal and political observers were also dismayed when Mukasey dodged Senators' questions last week about whether or not so-called waterboarding was, in fact, a form of torture. After eluding any straight answer, Mukasey wound up making the incredulous statement that he wasn't quite sure what was meant by the term.

Over the weekend, some leading Senate Democrats ranging from Dianne Feinstein of California to Carl Levin of Michigan engaged in their own form of equivocation, warning they might vote against Mukasey if he doesn't properly clarify his views when he responds to written questions from the Senate later this week.

But Dodd's bold stepping-out on this issue, rejecting any mulligan for a nominee who refuses to call torture by its proper name, seems like it might force the hand of fellow Democrats who might start looking rather silly if they don't turn thumbs down on the newly proposed AG. Within hours of Dodd's statement, fellow candidate and Delaware Senator Joe Biden also said he had made up his mind to vote nay. Campaign spokesmen for John Edwards and Bill Richardson also joined the chorus. And by late Monday night, the campaign of Barack Obama piled on, telling The New York Sun:

"Judge Mukasey has failed to send a clear signal that he understands the legal and moral issues that are at stake for our country, and so I cannot support him." Mr. Obama said even a clarification from Judge Mukasey would be insufficient. "No nominee for attorney general should need a second chance to oppose torture and the unnecessary violation of civil liberties," he said.

After this barrage, Mukasey's nomination might be dead in the water -- if you'll excuse the pun.