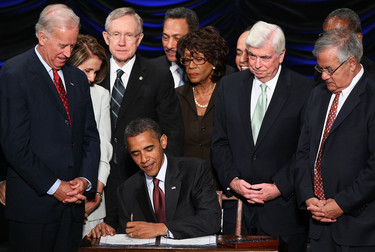 Five years ago today, in the aftermath of the Great Recession and Financial Crisis, President Obama signed major financial regulatory reform into law -- the Dodd-Frank Wall Street Reform and Consumer Protection Act. The law was designed to increase transparency and limit risk in the financial system.

While Section 404 of the Act requires advisers to most private equity investment funds to register with the Securities and Exchange Commission (SEC) and report basic organizational and operational information about the funds they manage, reporting requirements for private equity are less stringent than for publicly traded companies. PE fund advisers are not required to report the incomes of partners and senior managers, which companies their funds own, or the financial performance of the individual companies in their portfolios. Moreover, much of what is reported to the SEC is not made public. This lack of transparency creates problems for pension funds and other investors in private equity who cannot make informed decisions about whether and with which private equity firms to invest.

Despite these limitations, SEC regulators have identified widespread abuses. As I detail in a report earlier this year, the SEC found misdeeds including manipulating the value of portfolio companies, waiving their fiduciary responsibility to investors, incorrectly charging PE firm expenses to investors and failing to share monitoring fee income with them, and collecting transactions fees from portfolio companies without registering as broker-dealers. These revelations have had some beneficial effects. A few PE firms have voluntarily halted the most egregious practices going forward for their new funds. Some investors have negotiated lower management fees to be paid to general partners, or for a greater share of monitoring fee income to be used as an offset to the management fees. These developments, while welcome, are piece-meal. They fail to address the many violations of securities law that SEC inspections have revealed and, because they are voluntary, they do not include measures to disgorge the ill-gotten gains reaped by PE firms' partners and top executives and return them to past and present fund investors. Only vigorous enforcement actions by the SEC that holds private equity firms accountable for improper or fraudulent actions going back years or even decades can end such behavior.

Enforcement actions to date have been few and far between. For the most part, these have been small cases and have involved relatively unknown PE firms such as Lincolnshire Management and Clean Energy Capital. Recently, however, the SEC brought a major enforcement action against KKR for misallocating expenses related to failed buyout attempts (so-called 'broken deal' expenses) to the pension funds and other investors in their flagship PE funds.

The SEC found that, over a six-year period from 2006 to 2011, $17 million in expenses that should have been paid by co-investors in the PE funds, including KKR executives, were wrongly charged to the PE funds' limited partner investors. This misallocation of expenses to its funds' limited partners was a breach of the PE firm's fiduciary duty. On June 29, the SEC issued an order that required KKR to pay nearly $30 million, including refunds with interest to investors and a $10 million penalty. KKR consented to the order, but neither admitted nor denied the SEC's finding.

On the same day that the SEC issued its order finding that KKR had failed in its fiduciary responsibility to investors in its funds, the Deveboise & Plimpton law firm requested a waiver from the SEC so that the regulator would not designate KKR as an 'ineligible issuer.' The SEC granted the waiver.

How was KKR able to avoid having to admit guilt for behavior that clearly violated SEC regulations designed to protect investors from predatory behavior by Wall Street firms? And how did it immediately obtain a waiver from rules that the SEC can use to discourage such behavior by powerful investment companies?

The answer may lie in the revolving door between Washington and Wall Street, and in the too-cozy relationship between regulators and those they regulate. In the KKR case, it is important to note that Mary Jo White, Chair of the SEC, led a team of 200 lawyers at Deveboise & Plimpton from2 002 until her move to the SEC, following earlier stints with the firm in 1976 -78 and 1983-90. This is the law firm that obtained the SEC waiver for KKR. Critics of the SEC, including Senator Elizabeth Warren, have raised questions of perceived conflicts of interest more generally related to White's work at Debevoise & Plimpton, a law firm that represents many Wall Street clients.

The SEC has become a flash point in the debate over regulatory 'capture' in which regulators identify with the firms they are supposed to regulate and fail to fully protect the public's interests. SEC staff often take high-paying jobs with the same companies they were formerly charged with overseeing when they leave the Commission.

The SEC has a straightforward mission to protect investors: It must make sure that companies selling securities to investors tell the truth about their businesses, the securities they sell, and the risks involved; and it must make sure that investment advisers, brokers and dealers treat investors fairly and put investors' interests first. The SEC has explained the paucity of enforcement actions on the grounds that serious enforcement cases take time to prepare, and has indicated that more actions against PE firms that fail to put investors' interests ahead of their own are in the works. It is important that they follow through. Whether Dodd-Frank succeeds in reining in the excesses of private equity firms that operated in the shadows for more than three decades will depend on how vigorously the SEC acts to enforce rules that protect pension plans and other investors in PE funds.