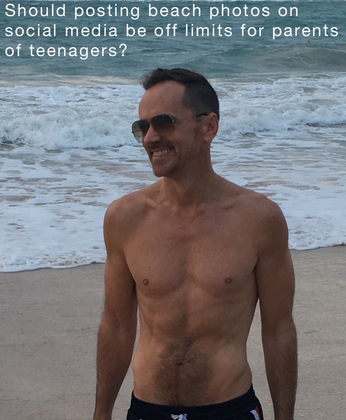 A couple of days ago Jackson came home from school and made a beeline for my home office, forgoing snacks, his handheld or any of his usual diversions. He's fourteen so I knew something big was about to go down. This feeling was bolstered by the way he stomped down the stairs to the lower level of our house. Part of the reason I've put my office downstairs is that the stairs serve as an early alert system. I can not only tell who is on their way, but what kind of mood they are in, and his footsteps definitely had an angry quality to them. I slipped off my glasses, took a deep breath and tried to prepare myself. Jackson rounded the corner to my office, dropped his backpack on the floor and said, "My friends think you're a gay porn star." Okay, I was not expecting that.

A couple of thoughts went through my head. First, his friends think I look good enough to be a gay porn star. I'm not proud, but there it is. Second, I probably need to dial back the nipple quota on Instagram. It turned out to be something a lot less interesting. His friends had googled my name (okay, why?) and found some blog or another where I had quipped that I made my living in adult learning, which is a lot less interesting than adult movies. I explained to Jackson that I was just making a play on words and told him that if he and his friends paid more attention in ELA (English Language Arts) we wouldn't be having this discussion. He picked up his backpack, muttered a whatever and stomped his way back upstairs.

But this skirmish did get me thinking about what happens when our kids stumble across something on the internet about their parents that's potentially embarrassing to them. Should we be scouring the web and scrubbing away our existence in order to prevent them from learning more about us than they ever cared to know? I don't think so.

The reality is that everything we do is embarrassing to our teenage children. I can't even cheer for Jackson during a swim meet without getting his hate look. Once you accept that, everything else is a matter of degree. So here's the system we've come up with that works for us.

So far the system seems to be working, but Jackson has already tried to test it a couple of times. My husband Ken commissioned John MacConnell to sketch me in a very tiny pair of underwear for my 50th birthday. The sketch is definitely racy, and so it hangs in our bedroom. Jackson felt like the gift ticked the third box on our list and asked me if I would take it down, so his friends would not see it. I explained to him that his friends didn't have any business being in our bedroom and the drawing wasn't going anywhere.

He also wasn't thrilled when Family Equality asked Ken and me to record a session for StoryCorps. We've been telling our story for years, and Jackson has appeared in newspapers since he was just a few months old. In fact, a picture of the three of us from one of those early articles recently popped up in his swim coach's college Psychology textbook. I'm not even sure how that happened, but there we were with a smiling six-month-old Jackson.

But recently Jackson has been a lot more protective of his identity. One of his biggest priorities in the world right now is not standing out in any way. So having his parents record something that would ultimately end up in the Library of Congress made him very uneasy.

I told him that I understood where he was coming from. But I asked him if there was anything we could do to help people better understand families like ours, didn't we owe it to ourselves and those families to do that thing? He said he guessed so, but didn't sound fully convinced. I don't like saying no to Jackson; I'd much rather say yes. So I asked him how he felt about me getting rid of the "porn star" quote. It was, after all, just a throwaway line that didn't mean anything to me. He told me that would be cool. While I'm not prepared to sanitize my online persona to make my teenage son happy, I am happy to negotiate what stays and what goes. I'm hoping he will be just as reasonable when I start asking him to start cleaning up after himself online.

More:
ParentslgbtParenting parents-dads
Newsletter Sign Up
Raise the kind of person you'd like to know
Subscribe to our parenting newsletter.
Successfully Subscribed!
Realness delivered to your inbox