Gandhi taught that "The greatness of a nation and its moral progress can be measured by the way its animals are treated." The way in which Western Civilization has neglected its duty to care for some of its most precious creatures reflects a callous attitude towards non-human life. This is especially true in legal settings. For example, in British common law, legal precedents established over many centuries by courts (rather than statutes) have primarily determined a variety of judicial rulings, including those that pertain to animals. One of the most widely-emulated positions around the world has been the ruling that animals have no rights. Cases of abuse against animals were considered an infringement upon the owner's right of property, meaning that the law does not recognize animals as having their own interests. 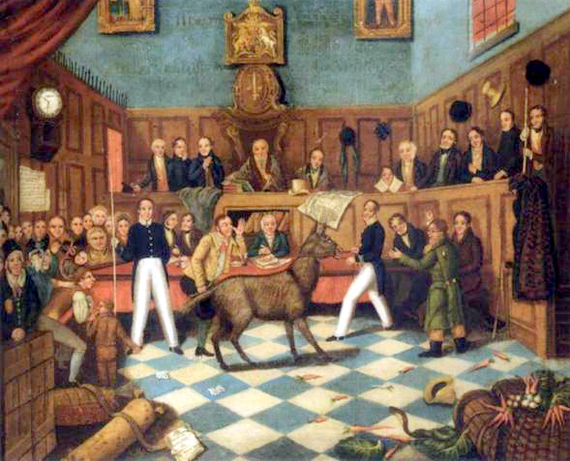 One of the earliest challenges to this precedent came from Jeremy Bentham (1748-1832), who, skeptical of the legal philosophy of Sir William Blackstone, the foremost exponent of the common law, established the philosophy now understood as Utilitarianism. As he observed the movement to abolish slavery during the French Revolution, Bentham began to question other abuses. In An Introduction to the Principles of Morals and Legislation (1789), he openly speculated on "when the rest of the animal creation may acquire those rights which never could have been withholden from them but by the hand of tyranny... The question is not, Can they reason? Can they talk? But, Can they suffer?"

In the United States, a major development occurred in the post-Civil War period. Henry Bergh, after witnessing the mistreatment of horses in Russia and encountering the Royal Society for the Prevention of Cruelty to Animals in England, founded the American Society for the Prevention of Cruelty to Animals (ASPCA) in New York in 1866. To Bergh, it was simply a "moral question" that the "mute servants of mankind" such as horses needed protection. The New York State legislature then gave the ASPCA the authority to investigate cases of animal cruelty and make arrests. Bergh helped close down many places where dog fighting (dog versus dog and also dog versus rats) had occurred, and even established an ambulance to evacuate disabled horses. By the time of Bergh's death in 1888, nearly all states had passed laws against animal cruelty.

Throughout most of the twentieth century, changes in jurisprudential thought regarding animal abuse have been minuscule. Early state legislation merely limited human abuse of animals and excluded many institutions from penalties. Even the Federal Laboratory Animal Welfare Act of 1970 was primarily motivated by a desire to protect dog and cat owners from having their animals stolen and brought to laboratories. Only in 1976 was the law changed to protect laboratory animals from egregious mistreatment, although the experiments themselves were excluded from the law's protections.

The predominant attitude during this time was that animal experiments helped people live longer, and had helped in the development of penicillin and insulin and treatments for asthma, kidney disease, meningitis, and tuberculosis. Science seemed to know what it was doing, and courts were reluctant to interfere. There were a few critics during this period. Mark Twain (who once quipped: "The more I know about people, the better I like my dog") regarded any experiments on animals as unacceptably immoral, and wrote several articles denouncing the mistreatment of animals. He was among a small minority.

In the 1970s, two new books challenged the status quo. Gerald Carson (1899-1989), a former advertising executive who later turned to writing social histories and later served on the Advisory Board of American Heritage magazine, wrote Men, Beasts, and Gods in 1972. The book challenged the legality and moral validity of animal experiments. In one experiment Carson noted that the Air Force used pregnant monkeys to conduct crash tests, and declared the results "preliminary," so it would be repeated indefinitely. As Carson sardonically noted: "How many pregnant women are expected to fly military aircraft has not yet been disclosed." Philosopher and Princeton Professor Peter Singer wrote Animal Liberation (1975), and questioned the validity of most animal experiments, dismissing them as "trivial and obvious," that millions of animals could be spared if these experiments were eliminated. Singer adopts Bentham's suffering paradigm of utilitarianism: enormous animal suffering in these experiments outweighs whatever minor benefits might emerge from research.

It still took some time before court cases on behalf of animals made it through the system. In the 1976 case of Jones v. Beame, individuals and animal welfare organizations were initially successful when they sued New York City over the cruel and abusive conditions existing at two of the city's zoos. Unfortunately, this ruling was overturned a year later on appeal (the "zone of interests," similar to "standing" to sue, was deemed not to apply), delaying the time when people could sue on behalf of animals to protect their welfare.

Things began to change in 1981, when Alex Pacheco, a founder of People for the Ethical Treatment of Animals (PETA), began an undercover job at a federally funded laboratory, the Institute for Behavioral Research in Silver Spring, Maryland. He encountered monkeys locked into cages with huge accumulations of urine and feces. The experiments, far from having any medical rationale, often consisted of cutting the spinal nerve until a limb was disabled; then the monkeys were shocked until they made an attempt to use their disabled limb. The monkeys frequently were not fed and experienced great pain from restraints and the experiments. Pacheco secretly documented the abuses and then PETA began a decade-long legal battle. In the end, the case created precedents for the first arrest and conviction over abusive animal experiments, rescue of animals from abusive experimental labs, strengthening of the Animal Welfare Act, and even a Supreme Court victory for animal welfare.

Today, organizations such as the Animal Legal Defense Fund (ALDF) continue to pursue court cases on behalf of animal rights. The ALDF currently has about 25 cases pending (several with PETA and other organizations), ranging from court suits to prevent the mistreatment and killing of animals by private citizens or companies, requests for documents to guarantee that animals are treated fairly in city and state facilities and exhibitions, suits against federal agencies (such as the Food and Drug Administration and Department of Agriculture) over their failure to protect and even plans to kill animals. In spite of progress, millions of animals are tortured and abused through entertainment, experiments, or individual abuse.

Progress at limiting torture and abuse to animals is moving slowly but there is increased attention on the matter. It is clearly not enough to merely legislate against abuse as this approach has not won in the American courts. Is it not absurd that a corporation can be treated as a legal entity ("corporate personhood") but another non-human entity that actually has sentience, animals, cannot? Even if animals do not become legal agents that have rights that can be defended in courts of law, we must, at the very least, reinforce the legal duty not to abuse any sentient entity. To be sure, humans without functioning nociception (pain receptors) still have full rights since humans have rights beyond possession of sentience. Although animals may not be moral agents, they may, of course, still be moral subjects deserving of moral and legal consideration for "animals are hardly strangers to our courts." Even if animals are not granted legal rights, they most certainly must be granted legal considerations. Further, even if we agree that humans and animals are fundamentally different, this conclusion does not give license for instrumental use and zealous abuse with no accountability. An animal does not have the same legal rights as a human but legal duties and considerations must nonetheless be emphasized. This duty is not due to the animal capacity for reason, speech, or language. Rather it is due to their significant sentience. If one feels pain, one has a right to be defended against that pain and we collectively have a duty to prevent that needless pain. This is the decade that our legislation and court rulings must advance in one form or another to adequately ensure our laws are just toward all sentient beings.