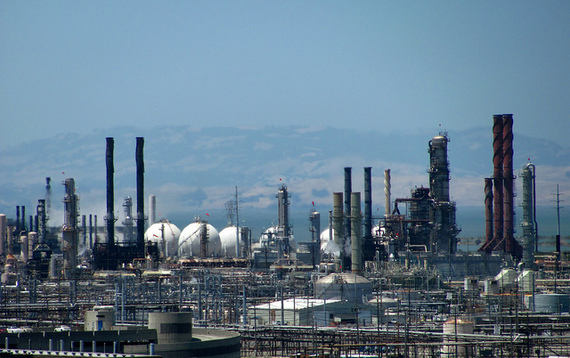 There they go again... with the same lament we always seem to hear from Big Oil lobbyists when it's time to protect public health:

Don't put environmental protections on fuels, because that "will hit low-income and middle-income families the hardest." In other words, if you make us clean up our act, then we'll be forced to raise gas prices, which hurts vulnerable people... You don't want to hurt them, do you?

Hmmm. Do oil companies really care about vulnerable populations like low income people and communities of color? Could it be that they are using these families as a smokescreen for killing environmental protections and protecting their profits? Let's look at the facts and see if we can cut through some of this smoke.

Oil companies are among the most profitable enterprises in the world -- last year the "big five" made $93 billion in profits, or $177,000 per minute. Even in my home state of California, which is at the forefront of environmental protections, Chevron is still the largest company by revenue (take that Apple and Facebook!). Many polluters have been claiming for decades that clean air standards will "cause entire industries to collapse," but those dire predictions have never come true. The idea that we have to choose between environmental protection and economic growth has always been a false choice.

Who is really to blame for high gas prices -- and who stands to profit from that sick feeling you get when you're fueling your car and the price shoots past $40... $50... $60? Turns out an average vehicle uses $22,000 in gas over its lifetime, $15,000 of which (68 percent) goes right to oil companies. Further, an additional 25 cents in the price per gallon of gas at the pump every three months equals an additional $5 billion in profits for the big five oil companies.

Wouldn't it be nice to have some say in the matter? Some consumer choice? Unfortunately, most of us drive gas-powered vehicles and don't have any choice when we fill up. Big Oil has us in its grip: we pay what they say. The only way to lower prices in the long run, and reduce our vulnerability to price spikes, is to diversify our fuels and vehicle mix -- exactly what new clean fuels policies will do in California.

Low income people and communities of color spend a much higher than average portion of their monthly income on fuel, and are indeed the most over-burdened by high gas prices and vulnerable to unexpected price spikes. "Cheap gas" however, will not reduce their vulnerability in the long run.

Then there are the social costs of dirty fuels -- the ones Big Oil isn't paying but everyone else is. The public health costs of air pollution and climate change. The poor and communities of color are especially prone to these costs, including high rates of lung and heart disease. In California, Latinos and African Americans account for nearly 75 percent of residents in the most polluted ZIP Codes -- despite comprising only 44 percent of the state's population. According to the Environmental Protection Agency:

So let's lift the mask off the latest masquerade of compassion: a last-ditch effort now underway by some oil companies and their political allies in Sacramento to derail the most comprehensive clean fuel policies in the country. Ironically, the policies they're attacking -- the state's cap-and-trade program (C&T), which will include transportation fuels starting next year, and California's Low Carbon Fuel Standard (LCFS) -- are already in place and working. And guess which constituency they are using to cover their political tracks? Spoiler alert: it's vulnerable communities.

The dirty fuels in California's transportation sector are the leading cause of pollution in the state -- responsible for nearly 70 percent of smog-forming gases and 40 percent of climate change pollution.

By transitioning the state's transportation system to cleaner fuels, the C&T and LCFS will result in a cumulative public benefit of $23.1 billion by 2025. The C&T and LCFS together are projected to prevent 600 heart attacks, 880 premature deaths, 38,000 asthma attacks, and almost 75,000 lost work days as well as reduce consumption of 21.4 billion gallons of gasoline and 11.8 billion gallons of diesel fuel by 2025, according to a new report by EDF and the American Lung Association.

California is making waves (again) by leading the country with the most comprehensive climate, clean air, and clean fuels policies. By transitioning to cleaner fuels and vehicles, everyone will be less vulnerable to spiking oil prices and dirty air.

By attempting to rain on California's clean parade, Big Oil is using the same dirty tricks they've used for decades, and spinning a false story to try and derail these policies.

It's time these companies stop pretending to be champions for vulnerable communities; their oil-soaked billions and clouds of pollution spewing into low-income communities of color tell the real story.

Instead, maybe they should actually join the race toward a clean, healthy economy. We could use their technological prowess to help us get where we need to go. If they ever did that, then they could claim to be standing up for vulnerable communities -- and really mean it.