Maybe it's just that we got better at saving all infant lives in general during this time. In fact, all-cause infant mortality did go down during this period, driven by a decrease in mortality after the first month of life, but only by 13% (measured in deaths per 1,000). Could other factors be making these three death rates go down besides breastfeeding? Let's look.

SIDS
Could "safe sleep" campaigns account for some of the SIDS decrease?

The SIDS rate decreased by 46% from date of the initiation of the Back to Sleep Campaign in 1994 (103.3) until 2001 (55.5), where it stayed through 2009. (Interestingly, the SIDS rate had already fallen drastically even before Back to Sleep: from 145.8 in 1983 with a steady decrease even until the recommendations were released in 1992 (120.3)). The plateau of the SIDS rate led the American Academy of Pediatrics and researchers to look for a shift in risk factors in order to further decrease SIDS. A new focus against bed-sharing emerged, with numerous campaigns around the US focusing on baby "Alone, on Back, in Crib" (ABC), advice thought to interfere with breastfeeding. Some evidence suggests that these campaigns may have backfired and led to parents inadvertently fall asleep in more dangerous settings, increasing the risk of death. What little data exists on the efficacy of the recent safe sleep interventions for parents is for a crib giveaway educational program for self-selected parents and was too small to evaluate efficacy. The evidence that bed-sharing is even a risk factor for SIDS when other risk factors are absent is a subject of considerable debate in the literature, whereas breastfeeding is has a potent protective effect. Overall, more recent safe sleep campaigns are unlikely to have contributed much, if anything, to the recent decrease in SIDS rates.

NEC
There are no national databases on breast milk feeding rates among very low birth weight infants in the United States but informal estimates show marked increases over this time period. As a proxy measure, donor human milk use increased in level 3 and 4 Neonatal Intensive Care Units from 25% to 45% from 2007 to 2011. We also know that there have been other changes in how preterm infants are managed which also may improve their outcomes and decrease their mortality over this time. The rate of very low infant birthweight birth has decreased during this time, but only by 5.4%. Given the current dramatic impact of mother's own milk on NEC, the increase in use of mother's milk would be expected to contribute significantly to the decrease NEC mortality rates.

Lower respiratory tract infection
The decrease death rates in the lower respiratory infections is out of proportion to the effect of breastfeeding on preventing hospitalization from LRTI, an odds ratio last reported as 0.72. This would imply that if breastfeeding is largely responsible for the decrease in deaths, its effect is either underestimated, or other factors, such as improvement in medical care for critically ill infants, has markedly improved over this period. 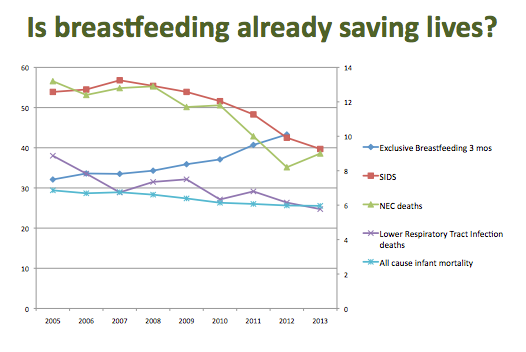 Does breastfeeding save US lives? This graph shows that exclusive breastfeeding for 3 months is inversely correlated with deaths from SIDS, NEC, and lower respiratory tract infection. (Note, 2013 breastfeeding rates are not yet available but are likely to continue to improve at a similar trajectory). There are other factors that are certainly influencing the mortality rates of at least NEC and LRTI, and possibly SIDS, but the weight of the evidence strongly suggests that breastfeeding is playing a significant role in the decreased mortality of all three conditions since 2005.

Policies that help support women to exclusively breastfeed their infants, such as paid leave, are important to the nation's health. Lives depend on it.

More:
MotherhoodmaternityParentsInfantBreastfeeding
Newsletter Sign Up
Raise the kind of person you'd like to know
Subscribe to our parenting newsletter.
Successfully Subscribed!
Realness delivered to your inbox