It is unarguable that Renaissance art erased Jesus' Jewish identity. Just walk through any museum gallery of Renaissance artworks or look at images of Renaissance paintings in books and you will see a Christian Jesus with no trace of Judaism. This, despite the fact that the Gospels tell us that Jesus, his family, and followers were dedicated Jews. Anglican priest Bruce Chilton, author of Rabbi Jesus, has underscored that fact: "It became clear to me that everything Jesus did was as a Jew, for Jews, and about Jews." Other Christian and Jewish scholars have also confirmed this reality. Even Bill O'Reilly, in his book Killing Jesus, affirms Jesus' Jewish identity right up to the crucifixion.

How could the Jewish Jesus be so obvious to scholars and even lay people, yet art historians, curators, and critics ignore the glaring absence of Jesus' Jewish identity in Renaissance artworks. In exhibitions you will find elaborate descriptions and analysis of the minutest details of the featured artworks but never an acknowledgment that they falsify biblical history.

Moreover, in setting Jesus apart from Judaism, the falsification by omission was a powerful reinforcement of the pervasive anti-Semitism that has spanned many centuries.

Some of the anachronisms are startling when you grasp who Jesus was throughout his life: a dedicated observant Jew. A dramatic example is Jan Swart Van Groningen's 16th century painting, Jesus in a Landscape. 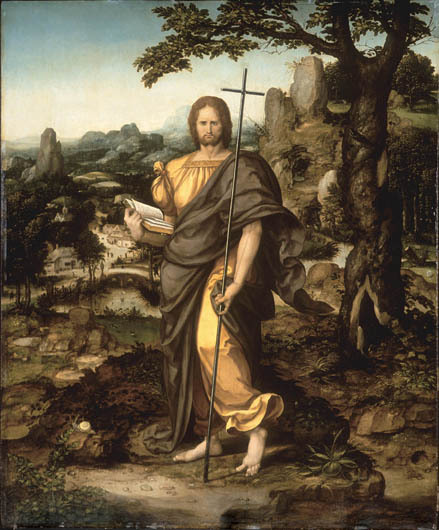 Not only does Jesus look like a European rather than a first century Semite, he's holding a crucifix staff -- and presumably reading a Christian bible (suggested by the crucifix). If this image doesn't strike you as odd, it should. It's a powerful visual statement that says: Jesus is thoroughly and exclusively Christian. Yet Christianity did not exist in Jesus' lifetime and he never proposed a new religion.

Jesus would be puzzled if not horrified by this image. The cross as a Christian symbol would not appear for another 300 years, when it was introduced as a battle symbol by the Roman Emperor Constantine. The only crucifix that Jesus held was the one he was nailed to after he was forced by Roman Centurions to drag it along with his battered and bloody body to Golgotha for his crucifixion. No wonder that the crucifix was a hated and feared symbol during Jesus' lifetime: It represented the slaughter of untold numbers of his fellow Jews by the Romans.

Yet countless paintings of Madonna and child display a crucifix and other Christian symbols to identify Jesus and his family as Christians at a time in their lives when they only identified as Jews and were dedicated to Judaism. 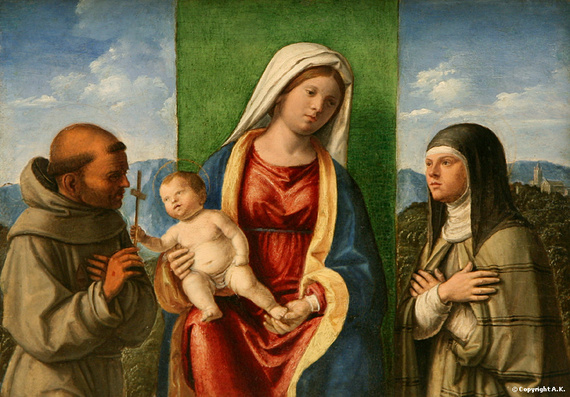 Madonna and Child With St.Francis and Clare by Cima da Conigliano -- wikimedia.org

The phenomenon of erasing Jesus' Jewish identity was actually far worse and more intractable than a conspiracy. If it were a conspiracy one could identify and expose the conspirators and then encourage others to correct the falsifications and distortions. But the distortions and omissions that I've cited were driven by a doctrinaire ideology that consistently resulted in portrayals of Jesus and others as Renaissance era Christians. The storyline of Jesus as a Christian was woven into the narrative of European Christian culture. Ideologies that are assumptions of a culture are unshakable and almost impossible to penetrate or dismantle.

Portraying Jesus as Christian with no Jewish connection reflects the outcast status of Jews throughout Europe during Medieval and Renaissance times. Jews were marginalized, denied opportunities for livelihoods, persecuted, and frequently subjected to massacres and expulsions, often rationalized by the malicious charge of "Christ Killers." These assumptions were also reinforced by the Church discouraging the populace from reading the New Testament on their own and forbidding translations of the bible into native languages. With the bible kept out of the hands of the public, the populace only knew what they were told by Church officials -- and what they were told did not include the Jesus of the Gospels, who prayed and taught Torah in synagogues (Luke 4:31 and 13:10;Mark 1:21 and 3:1; Matthew 4:23). Instead, the Church demonized Jews and depicted them in opposition to Jesus -- when in fact all of his followers were Jews.

Against this ideological backdrop, would an artist even dare to depict a Jewish Jesus? Did artists even have to think about it? Art historians with whom I have spoken dismiss and rationalize the omission of Jesus' Jewish identity as expressions of technical trends in Renaissance art, particularly the introduction of naturalism, realism, the revival of Greek idealism, and the Renaissance painting style of contemporizing figures in dress, appearance and setting.

But the fact is that Renaissance artists had virtually no control of the thematic content of their works, particularly the most import artworks. In the early Renaissance art developed as a fiercely competitive business that depended almost entirely on patrons. And patrons were specific about what they wanted, as described by Renaissance art expert Michael Baxandall in his highly regarded book, Painting and Experience in Fifteenth Century Italy: "...the alter pieces and frescoes that most interest us were to order and the client and artist commonly entered into a legal agreement in which the latter committed himself . . .to what the former... had laid down." Famed Renaissance artist Filippo Lippi expressed his subservience to his patron Giovanni di Cosimo de' Medici in a letter cited by Baxandall: "I have done what you told me on the painting and applied myself scrupulously to each thing." The billing for art commissions was often specifically detailed, as in Baxandall's example of Borso d'Este, Duke of Ferrara, who paid for his paintings by the square foot. For the famous frescoes in the Palazzo Schifanoia the Duke paid "ten Bolognese lire for each square pede."

Since art was commissioned and controlled by rich patrons and Church officials, wouldn't artists instinctively know that they would be out of business and possibly turned over to the Inquisition if they pictured anything other than the Christian imagery that their patrons demanded -- the contractual images that emphasized devotion and often included portraits of the patrons ("donors") in the paintings?

The ideological assumptions that generated the pervasive denial of Jesus' Jewish identity in artworks was so powerful that it continues today among art historians and critics who fail to note or acknowledge the falsifications, while they dwell on more technical features.

These falsifications -- what I am calling "anti-Semitism by omission" -- have inspired me to organize an art exhibit called "Putting Judaism Back in the Picture: Toward Healing the Christian/Jewish Divide." Artists committed to the exhibit are working on new renditions of Renaissance paintings and other original artworks that convey the two sides of the Jesus story: Jesus the dedicated Jew and Jesus whose life and teachings inspired Christianity.

Underpinning this exhibit is the belief that ancient antagonisms and wounds dividing Christians and Jews will not be healed until Jews see Jesus as a faithful Jew and Christians look at orthodox Jews and see Jesus.

Fortunately, we are in a new era of reconciliation and healing led currently by Pope Francis' amazing pronouncements: "Inside every Christian is a Jew" and "I believe that inter-religious dialogue must investigate the Jewish roots of Christianity and the Christian flowering of Judaism."

I wonder what Renaissance artworks would have looked like if Pope Francis' understanding had been prevalent in that era? The proposed art exhibit may answer that conundrum. And Pope Francis' inspiring words should be an encouragement to acknowledge the role art has played in shaping false notions about Jesus which have placed a long-standing wedge between Christianity and Judaism.

Bernard Starr is a psychologist, journalist and college professor. He is the author of Jesus Uncensored: Restoring the Authentic Jew. Website: www.bernardstarr.com.