On Sept. 27 a European group calling themselves The Black Fish announced they had cut the nets of sea pens holding captive dolphins at Taiji, Japan. There is no indication that any of the divers who cut the nets have been apprehended by the police. Nor were any dolphins actually freed by this bold act.

Captain Paul Watson, head of Sea Shepherd Conservation Society, reported to me that he has two people on the ground in Taiji, and they report that none of the dolphins left the sea pens because the cuts were too small and too high. (NB: Sea Shepherd had nothing to do with the net cuttings.)

The overriding problem with cutting nets is that dolphins do not readily leave confinement. They are not accustomed to barriers. They do not jump over nets -- something they could do easily. They don't swim under nets. This has been seen both in captive situations and in the tuna fishery where tens of thousands of dolphins have been encircled by nets.

Taiji, a village five hours by train from Osaka, was made infamous by the Academy Award-winning film, The Cove. Fishermen at Taiji kill up to 2,000 dolphins each year and take many into captivity for sale in Japan and around Asia. Some have been sent as far as Turkey and Egypt. It's big business. Each dolphin trained and ready to ship can be worth $150,000.

I have been working to stop the slaughter and capture of dolphins in Japan since 1979. The footage I took in 1980 of a ghastly slaughter of dolphins at Iki, Japan, was broadcast around the world and led to a government shutdown of that slaughter. Also in 1980, along with cinematographer Howard Hall, I went to Taiji to confront the fishermen over the capture of some 200 dolphins. We convinced the fishermen that if they killed the dolphins the film footage we would take would make them villains around the world and bring shame on Japan. 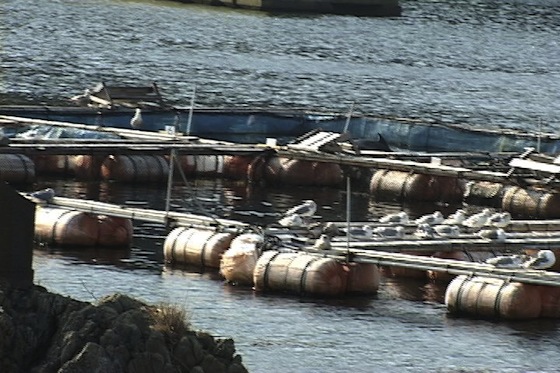 The fishermen agreed to release the dolphins. They pulled back the net that ran across the mouth of the bay where the dolphins were held. The dolphins did nothing. They would not leave. Either they were too stunned and disoriented to leave or they would not abandon podmates who were injured. Finally the fishermen positioned a motor boat at the base of the bay and began running zig-zag patterns that forced the dolphins to the mouth of the bay. Once they were clear of confinement the entire pod sprang into arching porpoise leaps and headed for the horizon. It was one of the greatest sights of my life. But they had to be scared out of the bay.

Cutting nets to free dolphins is an attractive idea. For me standing on cliffs filming the murder of dolphins in the killing bay at Taiji is agonizing. I know that reporting and filming these tragedies is important. But I have always known that if I cut the nets it would be very difficult to get the trapped dolphins to leave. In addition I would be expelled from Japan and BlueVoice would no longer be able to go to Japan to film events at Taiji and elsewhere and conduct toxicology tests on dolphin meat and the people who eat it.

Net-net, no pun intended, the action of the Black Fish led to no dolphins freed and almost certainly higher security in the area that will make outside observation more difficult. But the act also reinserted into the world news stream the dreadful events taking place at Taiji.