I am admittedly an old fart, with some ideas rooted in an upbringing that happened a long time ago. Increasingly I have a feeling that the world has gone mad, that a major shift of our social axis has occurred and nobody has an inkling of how or why. In fact, most people don't even notice. 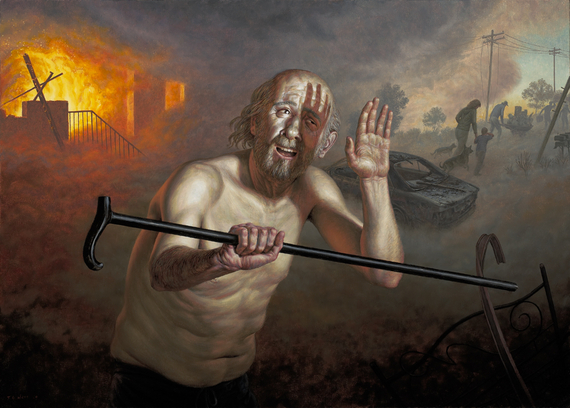 In American politics I don't remember anything remotely resembling this crazy election in all of the sixty years I've spent on this planet. For my first fifty years the media was restricted to a few major television and radio stations, certain major newspapers, and a handful of important magazines. They controlled the dialogue by focusing the nation's attention on a restricted number of stories. These narratives lived and died on cycles that were dependent on viewer interest, meaning that many important stories got ignored or dropped from circulation as a new cycle began.

If a particular voice or attitude was too radical, crossed societal bounds, or was just plain nuts, there were always voices that created a counter commentary. This could be frustrating for those pushing for necessary social change, but it also had a balancing effect upon the national dialogue. If someone presented a racist, sexist, fascist or communist attitude, there was usually a counter voice of societal authority to call them out on it. Opposing arguments were heard, considered by viewers, and the decisions they made would be acted upon in their lives. The town racist, for example, would be shamed into silence by a consensual communal agreement that those racist attitudes were simply wrong.

In the last ten years we've seen an incredible change in the way people interact with the world. Social media has invaded the human consciousness more effectively than any alien mind-control operation ever did in sci-fi movies. Look at your fellow humans as they stumble down the street, wait at the dentist's office, or even as they drive their cars. The smart phone is always there, at hand, absorbing all focused thought. Their lives play out online. 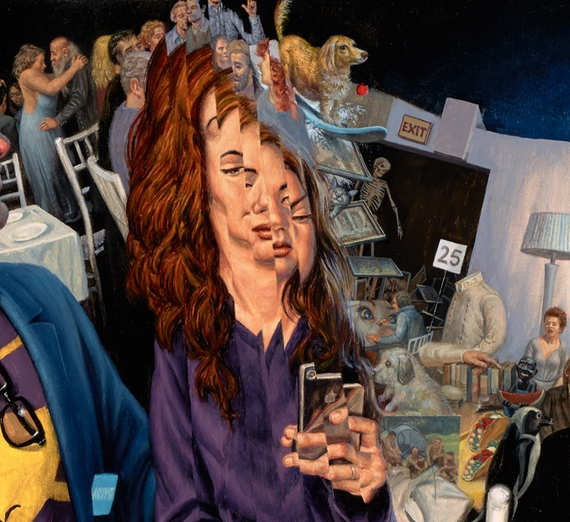 Facebook, the mega player in the social media mind-control business, wants each viewer to enjoy their experience so much that they become addicted to the activity. It has to function with speed, flawlessly, and reward the activity by flooding the brain's pleasure receptors with dopamine. Facebook has been extremely good at figuring out what you want and giving it to you. They know your online profile better than you do, and they tailor your experience accordingly.

As a representational artist with liberal political views, that means my Facebook feed is packed with images of paintings from artist 'friends' whose work I've 'liked' and photos and articles about Bernie Sanders and Hillary Clinton. Facebook feeds me things they know I'll like, and they do a great job of choosing from the thousands of posts put up daily by my 5000 closest Facebook friends. Under all of these posts are comments from mostly like-minded Facebook users, but every once in a while a dissenting troll will attack the comment thread. To see who they are I sometimes click on their name, and I am instantly transported to a dark parallel universe.

My troll (let's call him Rabid Rick) has a Facebook page that should scare the beejesus out of any left-of-center human with a hope that progressive reasoning will carry the country in the upcoming century. Commenting on a cascade of shared ultra-right articles and memes, Rick has his opinions reinforced by a small army of similar-thinking individuals who want to shoot Obama, ban Muslims, deport immigrants, Christianize the government and elect Trump. What terrifies me is the number of 'likes' and 'shares' that accompany each proffered post. Often in the hundreds of thousands, these numbers easily dwarf even the most popular of my artist friends' posts and equal or surpass the left-leaning memes and articles that flood my own feed.

The shame Rabid Rick might have once felt (if he dared to express his opinion in public) is gone, obliterated by a supporting cacophony of assent. There is no societal restraint because each of us is encased in a social media bubble of our own making. I don't believe Internet companies like Facebook have intentionally created an echo chamber to further racist or xenophobic ideology, but even in the best of circumstances those ugly human tendencies are never buried very deeply beneath our thin-skinned civilized interactions. Through the algorithms Facebook has instituted to make your online experience pleasant and addictive we now create personal hermetic societies, each as light or dark as our own bewildered souls.

Mark Zuckerberg is probably encased in a social bubble of tech geeks and billionaires, but I doubt he'd appreciate a corporate feedback loop that never challenged his opinions. It wouldn't be good business to not consider alternate viewpoints. Does our democracy deserve less than this? I would happily endure the comments and posts of conservatives if I knew Rabid Rick had to defend his abhorrent positions to a broader swath of American public opinion. Facebook, please build some dissonant 'challenge' into your algorithm, because (if you can take your eyes away from your phone and think for a moment) our democracy is more important than your bottom line.