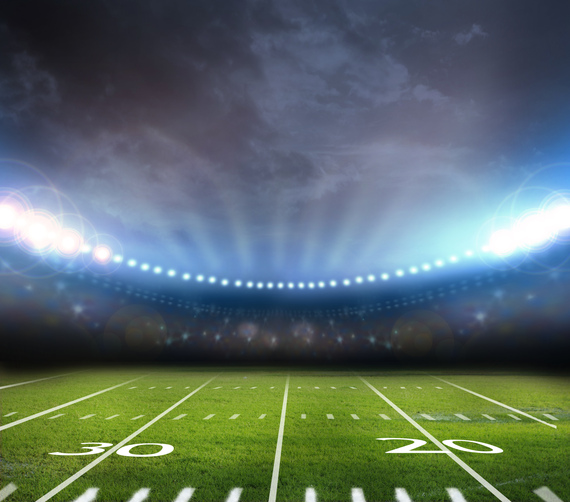 You're glued to the screen, surrounded by spicy hot wings and shouting friends. Maybe you have money on the game, maybe you don't.

One more down. One more chance to move 10 yards.

"Please, get it. Please God, let them just get it."

Without even realizing it, you find yourself praying. You are praying to the Almighty... for a play to go your way...for your team to win...for the other team to lose.

But does God care? Does God not have bigger, more important things to worry about? Don't we?

These questions come up this time every year, leading up to the glorious American tradition of Super Bowl Sunday. We wonder if God is concerned with something so relatively trivial, not to mention whether it's appropriate, even in a moment of heightened desperation, to use our precious prayers towards the outcome of a sporting event.

I can't pretend to fully understand God's plan. That said, Jewish tradition teaches that God is concerned and somehow involved in everything that happens in our lives. Classical Judaism subscribes to the belief that God not only created the world, but also plays an active part in it. The Jewish scholar Maimonides broke with the famed Greek philosopher Aristotle over this very idea. Aristotle believed God created the world and that the Creator relates to humanity but only in a general sense as a species - what is referred to as "General Providence". Maimonides on the other hand, echoing the traditional Jewish view, taught that God is concerned and relates to each and every person on the individual level - what's called "Individual Providence".

And so every concern we have - whether it's a big issue like a natural disaster or illness, a relationship or something important in our career, or it's something smaller like who wins the Superbowl - is part of the way the Almighty relates to us. And so from a Jewish perspective it wouldn't be inappropriate to pray for your team to win, if that's something which concerns you and you truly care about. Just remember, we also believe in free will and so if your prayers are not answered favorably and your team loses, that just may mean the other team played better, or possibly that you and your team's other fans were collectively lacking in merit, or perhaps it just doesn't fit into the bigger picture that we simply can not fully perceive.

What's important to remember is that God cares about people and that our relationship with Him (as well as the sum of our merits) does somehow play a part in the way everything unfolds, maybe even the outcome of the Super Bowl.

Also remember: praying your team gets a touchdown is still a conversation with God. Judaism teaches we are all meant to have a personal relationship with our Creator which we can't do without conversing. So, if you want to talk sports with God - go for it! What matters most is that you're talking at all. Just make sure the conversation doesn't end when the game is over. There's so much more to talk about.