In 2006, Al Gore's "An Inconvenient Truth" placed climate change at the center of national headlines, and "green" popped on the scene in a big way. Green had been growing in popularity since the early 90s as understanding of environmental issues and needs increased. Blockbuster movies like John Travolta's "A Civil Action" and Julia Roberts' "Erin Brockovich" helped people realize the consequences of environmental ignorance. Curbside recycling became the norm. And Gore's documentary finally crystallized the notion that human living was making our world unlivable.

The economic downturn of 2008 sharpened the call for green as people tightened their belts. Suddenly, what you bought and its impact on the environment got married. Why pay more when "reduce, reuse, recycle" cost less? Green was hot, and profitable. Books like Green to Gold told stories of Dupont and 3M making environmental changes to capture tens of millions of dollars in benefits. If you could make a product with fewer toxins, resulting in less regulatory fines, your profits would rise. All companies began marketing green aspects of their products. Wal-Mart opened a sustainability department. Students flooded environmental studies classrooms. The green promise seemed endless. 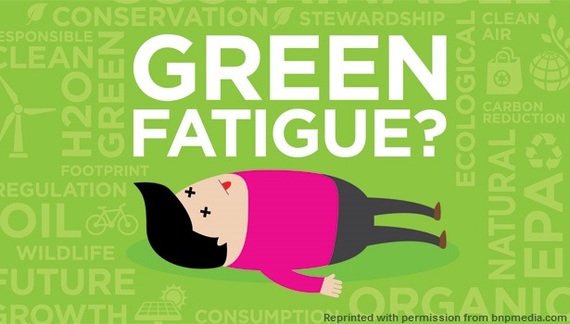 Unlike global warming, green began to cool off. It became over-used and over-done. It became politicized, with more extreme views polarizing and blurring the issues. People got tired of false and confusing claims. They became color-wary. How was it possible that every unearthly gesture would raise the temperature? Could every product bought really determine the planet's future? "Green" - so recently a rising star, lost its luster.

Market research by Mintel and Nielsen actually tells us that the green ethos is alive and well. It has a younger, more Millennial face to it, but it still exists and is a regular determinant of people's buying decisions. More than 50% of consumers surveyed in 2014 want products that are good for society and the environment. They want products that recycle materials, that are made with renewable energy, and that contaminate our waters less. What they don't want is green hype.

How do we soften the mantra as we move into a more socially responsible future? Does environmental good need to refresh its brand, image and credibility? Perhaps it's time "green" gets a new color.