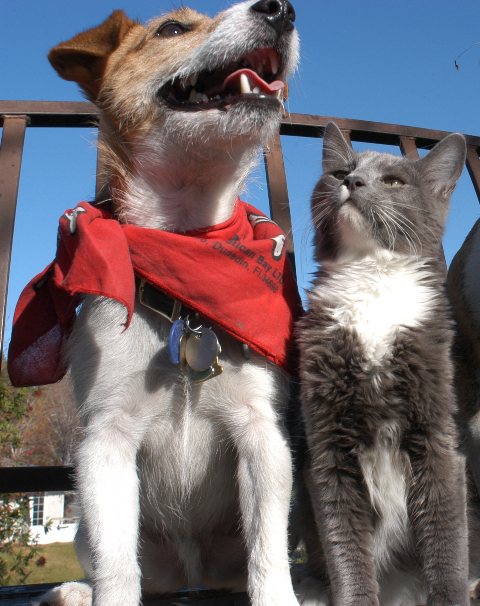 New study says that dogs have bigger brains relative to their body compared to cats. But does that mean that dogs are actually smarter? Or that cats are dumb?

The study published by researchers at Oxford University charted the evolution of mammal brains over the last 60 million years. They scientists found that mammals such as whales, dolphins, dogs and humans, tend to have larger brains relative to their body size when compared to more solitary species such as tigers and rhinos.

The co-authors, Dr. Susanne Shultz and Dr. Robin Dunbar state that these findings suggest that the cooperation and coordination needed for group living can be challenging and over time some mammals have evolved larger brains to be able to cope with the demands of socializing. Dr Susanne Shultz, who led the research, points out, "Dogs have always been regarded as the more social animals while cats like to get on with their own thing alone."

To many readers this might suggest that dogs must be smart and cats must be dumb. But let's think about this more carefully. First, this study didn't actually measure intelligence in animals, just brain size. And brain size isn't the only thing. For instance parrots have tiny brains compared to cats and dogs, yet most animal behaviorists would agree, the average Macaw or Cockatoo is much smarter than the average dog.

Secondly, the suggestion that dogs are smarter fails to ask -- smarter at what? It's true that dogs are very social and have a rich repertoire of social tools and body language built into their brain for handling conflict as well as for forming friendships and alliances with others. But does social aptitude equal smarter for the job? A look at the world's physicists and engineers clearly says "Not!" A psychologist friend of mine whose task it was to measure the mental and emotional IQ of highly skilled computer tech firm employees once told me something to the effect of, "When we measured the IQ of these scientists, they were way high, but when we look at their emotional IQ, they were well below average."

I propose that this is the same for cats. Certainly many cats are not very social, partly because they were not socialized during kittenhood, the way puppies are. And most cats do not know many tricks or behaviors on cue the way dogs do. On the other hand if you ask any of my colleagues they could tell and show you, that cats can learn many tricks and can learn to respond well to common cues such as sit and come when called. So what does it say if that as humans we have these potentially trainable cats in our home, yet many cats lounge around the house and get their meals for free? And many have even trained their humans to serve them on demand? Sometimes at 5:00 am in the morning?

I'd say it means that we humans, with our big brains relative to our body size, need to use our brains more because we're being outsmarted by the little-brained cat.