Dennis Kucinich is pretty short. So short that his website even says he is "not that short." And, when I called his office to ask if he would be interviewed for my book, no one ever called me back. If he were tall, would he be hiding from me, a relative unknown, writing a book no one will ever read, for almost no money? Still, he's about four inches taller than I am, which is why I'm allowed to talk about this stuff.

Statistically speaking, on the basis of height alone, he doesn't have a chance. Here is a list of candidates who have defeated a taller opponent to win the presidency, since the ubiquity of television, until the year 2000:

Two candidates. By 2000, the statistics (and statistics don't lie) were so daunting, that it was an impossibility that George W. Bush would defeat not one but two taller candidates, proving once and for all that he stole both elections. But we're not here to talk about the rape and murder of our nation. We're here to talk about something important: height discrimination.

Here is how most people think politics works: 1. Officials measure the candidates' heights. 2. The taller candidate wins. 3. The nation goes bankrupt. Wild dogs roam the once ornate office buildings of our cities' former financial districts. The wind rustles through the weeds that have sprouted up in long forgotten halls of industry. Somewhere, a cougar lies in wait for a band of nomads, going it alone in a wasteland of tattered dreams.

But, forget for a minute about whether a slight height difference confers an electoral advantage. Here is a list of candidates of below average height who have won their party's nomination since the ubiquity of television:

One candidate of below average height--and not even that far below average. Have you no shame, two political parties in America? At least the independents have crazy billionaire Ross Perot (5'7) and (potentially have) not-insane billionaire Mike Bloomberg (5'7). Anyways, here is a chart showing some interesting presidential heights. 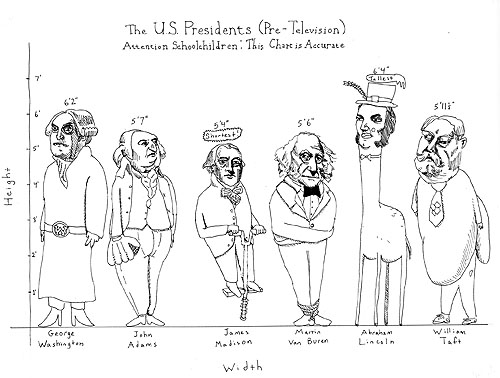 Since height-ism, or "smallotry" (bigotry against small people), has made it so there are no short figures in U.S. Presidential politics, I am providing the following list of interesting short politicians, courtesy of my book, The Short Book. I think you will enjoy it. If you don't, buy ten copies of the book and burn them--to really stick it to me.

Mohandas (Mahatma) Gandhi--5'3--The greatest non-violent freedom fighter in history campaigned throughout his life for India's independence and for the rights of the lower classes. His height was of no concern to him, as he believed "the strength of the soul grows in proportion as you subdue the flesh."

Queen Victoria--5'0--Queen of England from 1837-1901, Victoria was the longest reigning monarch in that nation's history. As the story goes, for every inch of her height, she added another layer of petticoats, thus becoming the second person ever to be wider than she was tall. The first person was "Barrel-Belly" Saunderson (b. 1812), a woman I made up who was born the shape of a disproportionate barrel.

Kim Jong Il--5'2--The North Korean dictator is 5'2 or 5'3 but he also wears 4- inch elevator shoes. This is without a doubt the least odd of his many eccentricities.

Haile Selassie I--5'4"--Rastafarians believe that this diminutive former Emperor of Ethiopia is literally God. Not bad for a short guy.

Barbara Boxer--4'11--The junior senator from California is the shortest member of the Senate, and stands on a portable platform known as the "Boxer Box" when she speaks at a lectern. She uses the "Boxer Flask" when things get too slow in subcommittee meetings. Those old guys can talk forever.

So that is just a few.

A question I get a lot, because I am an expert, and because I am unemployed and volunteer my time at a college political group's crisis hot-line, is: "What can I do if I am a short politician and hoping to win election?" Good question. Here are a few things that one prominent politician does to seem taller:

Arnold Schwarzenegger is about 5'9-5'10, but he claims he is around 6'1-6'2. Luckily he is a movie star, and movie stars are known liars and agnostics. He uses movie star tricks to seem taller, such as wearing cowboy boots, upstaging his colleagues and opponents so he will be closer to the camera, and making his hair stand up an extra 2 inches. In staged photo ops, wires hanging from the ceiling hold up his hair, but in situations where he has to move around a lot, he has a person behind him blowing a fan directly at the back of his head to keep his hair flowing skyward. This was a trick he learned from Linda Hamilton in the Terminator movies.

You can find out more about The Short Book at www.smallotry.com.