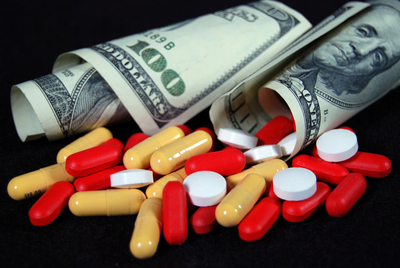 I recently lamented about how the high cost of drugs has been a road block in my daughter's medical care. Like many people with cancer, she is taking targeted drugs which have been critical to slowing the progression of her disease. These drugs come with a high price tag and it can take weeks or months to get approval from our insurance company whenever a new drug is added to her treatment plan.

Some commenters felt that high priced drugs are inevitable--the cost of doing business since pharmaceutical research and development (R&D) is so expensive. The most commonly cited statistic is based on a Tufts University study which puts the cost of bringing a new drug to market at about 2.6 billion dollars. However, the 2.6 billion dollar price tag is widely disputed with some sources citing the actual cost ranges from 50 million, up to 186 million dollars (much lower numbers but still not cheap.)

The Tufts study (and those in defense of big pharma's drug pricing model), often fail to note that funding for research comes from multiple sources, big pharma among them. Berkley University states that funding for science includes grants from various government agencies, institutions and foundations, private companies and charitable organizations. The issue of funding is further muddied because each stage of the discovery process presents a different mix of funding sources. According to the NIH, basic drug discovery tends to be funded primarily by government and philanthropic organizations while late-stage development is funded mainly by pharmaceutical companies.

But there is another layer to this onion. Breakthrough drugs --the kind of drugs that change the game for a particular disease or condition--tend to come from U.S. government investment compared with pharma companies to the tune of 10 billion spent by the U.S. government versus 2 billion for pharma companies. Why is this? Because it's expensive to develop a breakthrough drug for a rare disease and there is a funding gap between early and late stage development.

This gap is referred to as the "valley of death." To help fill it, The NIH states that U.S.-based foundations have increased their investment in discovery and development for new drugs specific to their diseases of interest. Remember the ALS Ice Bucket Challenge? This money is raised by the public - you and me - to help find a cure for a rare and deadly disease and this is something that's happening more and more.

Is pharma essentially double dipping by profiting from research they don't entirely pay for while overcharging patients who desperately need the drugs that come from this research? This is an extremely important question to ask. I can't begrudge a company for trying to recoup their investment and stay viable, even profitable, but I do have a problem with profiteering and exploitation of an extremely vulnerable patient population. This is where tighter industry regulations should come into play.

I think we may be focusing too much on that 2.6 billion dollar price tag in the first place. When nine out of the top ten pharma companies spend more on marketing than on R&D, then are we really paying for the cost of a new drug or for wasteful marketing spending and other indulgences? Pharmaceutical companies are profitable--in many cases, extremely profitable. Last year Pfizer had a 42% profit margin and was one of five top pharmaceutical companies that had a profit margin of 20% or more.

We are turning illness into a commodity. It's a terrifying equation. Take a company whose number one incentive is profit then give it the means to create new products without assuming 100% of the risk, then tell them they can set any price they want when they create (or acquire) a viable product and what do you get?

You get cancer drugs that cost $10,000 per month and cystic fibrosis drugs that cost $25,000. You get an industry that shies away from innovation because copying a blockbuster drug (and changing the formula only slightly) is a lot more profitable then inventing something new, something needed, for a much smaller patient population. You get fees that are totally unsustainable for insurance companies to pay without drastically increasing premiums.

You get monsters like Martin Shkreli who raise prices on older drugs for one simple reason--they can. They do so unapologetically in the name of capitalism. Mr. Shkreli is only a single head on this many-headed beast. He is a cautionary tale to all of us who struggle to pay our insurance premiums each month, and wait for days to get our medication approved. He has brought attention to the growing trend of massive price increases for older drugs, so maybe we should be grateful to hi because he is already inciting the kind of outrage that will hopefully inspire change.

We made it okay for a guy like Shkreli to thrive because we put a price tag on healthcare. We need to stop this. We need laws to prevent this from happening. We need to take profit margin and share holders out of the equation. There is no place for unrestricted capitalism in healthcare. There is too much at stake. When you'll do anything to save your life, or the life of your child, then guys like Shkreli know that no price is too high.

Pharmaceutical companies can still be part of the solution. There are incredibly well-intentioned and smart people working for these companies who have (and still can) make a difference in the lives of so many, but not if the companies they operate within continue to choose massive profits over human decency. I don't have the solution, honestly. I'm just the mom of a kid with cancer. I want someone to invent the magic pill to make it go away.

But if that pill is too expensive, if it's completely inaccessible to her, then that would be even more tragic than the fact that she got this disease in the first place.

--
This post has been revised since its original publication date of 9/30/15 to include more references to cited data as well as a clarification on my stance on the pharmaceutical industry as a whole (e.g., I don't think everyone's a crook).