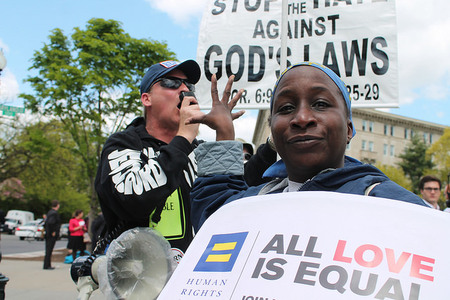 Hell hath no fury like the religious right scorned. The ink was yet wet on the Supreme Court's decision legalizing gay marriage when Southern Baptist minister and presidential candidate Mike Huckabee called for an uprising.

"I will not acquiesce to an imperial court any more than our Founders acquiesced to an imperial British monarch," he roared. "We must resist and reject judicial tyranny, not retreat."

Roberts must have been snoozing in con law class. This is precisely what the Supreme Court is supposed to do: Prevent a tyranny of the majority. That is its essential function.

The Founders changed the world by crafting a separation of powers in our government. Any ambiguity about the Supreme Court's role was cleared up in 1803 when the Court issued its decision in Marbury v. Madison. In that towering decision, Chief Justice Marshall ruled that laws in conflict with the Constitution are no laws, and that the Supreme Court is the final arbiter of what the Constitution says.

Roberts knows this, and Scalia, Huckabee and the whole howling pack of angry critics must know this, too. Why are they so furious about a decision that can have no direct effect on them? A court majority that blithely made "money talks" the law of the land in Citizens United really cannot complain about "judicial tyranny" when it finds itself in the minority.

Indeed, being in the minority, yet retaining fundamental rights, is exactly what this week's ruling is about. So what rights have gay marriage opponents lost? The answer, I think, is their future.

Opposition to gay marriage has only one refuge: Old Time Religion. To be sure, there are still plenty of people who take certain biblical passages to mean that homosexuality is wrong (conveniently overlooking other passages that say slavery is right). But their numbers are dwindling. American attitudes on gay marriage have swung about like the boom on a yacht caught in a gale of change.

What the religious right rightly fears is being blown away. They talk about the Roe v. Wade decision, but what haunts them is Loving v. Virginia. That 1967 Supreme Court ruling overturned laws banning interracial marriage. It came at a time when "We Shall Overcome," with its verse "black and white together," could be heard in the streets across the nation.

Today, racism persists, but only like a fatal disease awaiting eradication. It has lost all legitimacy. Even a billionaire NBA team owner can't get away with being a public racist.

Now, I am not making a content comparison of Old Time Religion with racism. I am saying that right-wing religion's exponents fear being stigmatized by this decision. Rick Scarborough of Vision America told NPR "What we have historically done is enforce moral standards," and after vowing to continue to discriminate in hiring regardless, he added wistfully, "Who wants to respond to a pollster and be called a bigot?"

More than two-thirds of young Americans already accept gay marriage. As it proliferates, more will. To come out as anti-gay is already seriously not cool. Increasingly, in high schools and colleges, to be anti-gay will be like coming out as a Klansman.

Are young people going to want to join a church whose emblem is a huffing and puffing Mike Huckabee wielding the Bible to exclude millions from marriage? Not likely.