UPDATE:
Nadya Suleman addressed the Angelina Jolie chatter during a "Dateline" special Tuesday night. "I have never even thought of Angelina Jolie, except the last time I saw a movie," Suleman told Ann Curry. "I think that was like years ago. This is so far away from the place I'm in right now, to think of any celebrity." She also denied having any plastic surgery. Asked if she'd had her lips done, Suleman replied, "No, no."

Both women are 33 and are mothers to arguably, at least for now, the two most famous broods in the world. They also survived divorce, longed for children and chose to become single parents.

Consider this: In photos of Suleman pre-octuplets out Monday, she looks noticeably different. She has had what appears to be lip implants or filler injections to pump up her pucker. She's also evidently had a nose job. Both nose and lips now mimic the features of Jolie, as others have pointed out. Scroll for photos and a closer look. Suleman already had brown eyes and has now grown her dark brown hair all the way down her back.

But beyond the physical, Suleman chose Ann Curry to break her media silence. Curry has long been Jolie's go-to girl and has flown around the world for multiple interviews with the movie star, including to Cannes and to Namibia while Jolie was pregnant with Shiloh. Scroll down for photos of just a few of the Jolie exclusives. Curry flew to California for the octuplet scoop.

Sure it's just speculation, and I don't know Suleman. But, I've read everything about her and I'm both fascinated and outraged by the story. She's struggled with mental illness before her octuplet pregnancy, she's on food stamps, three of her first six children receive disability payments, and she didn't tell her mother, with whom she lives, about the $167,000 in disability payments she herself received.

And I think Nadya Suleman believes she is like Angelina Jolie.

Here is Suleman on Today: 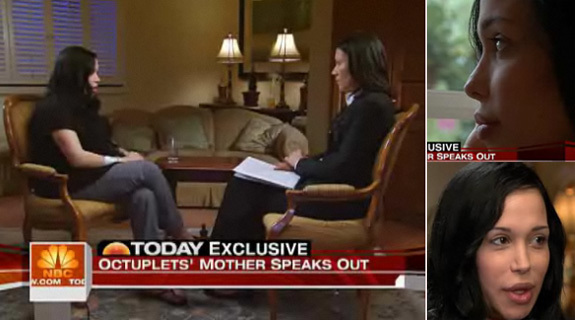 And here are some of Curry's interviews with Jolie: 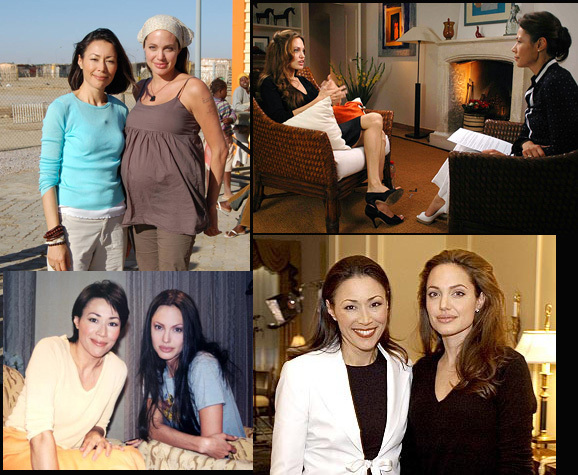