When two deranged gunmen can kill a dozen journalists and send Paris into panic in the name of their prophet, we seem to have more evidence of the damage religion does in the world today. We watch as the so-called "Islamic State" combines social media with barbaric tactics to unleash inexplicable terror. We hear time and again of clergy abusing their power by abusing members of their flocks. We are drawn further into cynicism when even Buddhist monks find themselves in the headlines for promoting violence in South East Asia.

Religion seems to poison everything.

Every MLK Day, the Reverend Doctor's sage wisdom and booming voice seem like echoes of a past farther and farther away. Dr. Martin Luther King, Jr. would have been 86 years old this week. Had he somehow escaped assassins' bullets, I can imagine him grey and dignified, bringing his prophetic wisdom to today's crises. More than ever, we could use his help to remember how to live together. 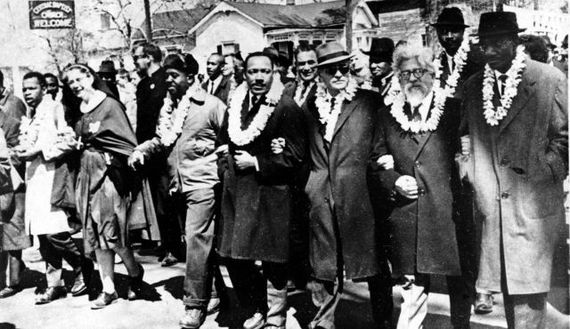 Dr. King taught that faith can provide the glue that keeps people striving to be their own better angels, and that faith is a force for good in this world. He may have been "an extremist for love," but he wasn't parochial about his faith, and he heard God's call in many sacred languages. He marched with Rabbi Abraham Joshua Heschel, who proclaimed that as they marched in Selma "I felt my legs were praying." He earned the respect and admiration of Catholic worker movement leader Dorothy Day. Muslim interfaith activist Eboo Patel often reminds his audiences of Dr. King's interfaith roots: Dr. King built on the non-violent work of a Hindu from colonial India, Mohandas "Mahatma" Gandhi (who himself was inspired by the Jain non-violent tradition, and the civil disobedience work of American Transcendentalist Henry David Thoreau).

We need to recall these powerful examples of disparate faiths converging as benevolent forces for remaking the world into a more peaceful, equal place. This year we saw the Nobel Committee split the Peace Prize between an interfaith duo that carries that torch forward. Malala Yousafzai defies the barks of Muslim puritans, and their bullets, to give voice to an Islam that stands for women's education. Her co-recipient and children's rights activist, Kailash Satyarthi, changed his last name to mean "one who seeks truth," from the Hindu concept of Satya. When they accepted the prize together in Oslo they spoke from their respective faith traditions about society's responsibility to its children.

Who are other faith leaders today that we can look to for moral direction? His Holiness the Dalai Lama may come to mind, as may His Holiness Pope Francis -- who can host dinners for the homeless while helping diplomatic efforts between Cuba and America. Evangelical Christian leaders like Rev. Samuel Rodriguez are working to bring dignity to the "humanitarian crisis" of American immigration reform.

But we need not only rely on heroes from on high to provide role models for faith. We need to tell more stories, and more often, about people enacting their deeply held values. Towards this end, I think we should see the impact that regular people are making through their faith, and non-faith. For example, Chris Stedman is a humanist who serves as a chaplain at Yale University and seeks rapprochement between communities of faith and secular folks. My friend Dane Rowley, a Mormon admissions executive at Cal Lutheran University, lives out his faith through a noble and gentle kindness towards all people with whom he interacts. He is a voice for women's rights and fair treatment of all people in his congregation. Jacquie Kaur and her husband Ravi Singh found that the homeless in Los Angeles' Skid Row neighborhood outnumbered the resources that could be provided to them. So they mobilized their Sikh faith to take hot meals to the hungry in a taco truck, and the Khalsa Peace Corps was born.

If we pay attention, we can see examples of faith bringing us together more than tearing us apart. And to me that is a major part of Dr. King's legacy of which we cannot lose sight or let go. Whatever our faith or guiding philosophy, we can act from deep within our value system to help bend that arc of history towards justice.

Many remind us, and constantly, of the death toll under religions' banners. But so many of these conflicts have political and economic roots, something that religion writer Karen Armstrong argues in her recent book on "religious" violence called "Fields of Blood." And moreover, we can take our pick from faithless causes that have murdered millions whether in Stalin's Russia, Nazi Germany, or Cambodia under the Khmer Rouge. What is the religion of unbridled capitalism that enslaves, maims and demoralizes the global poor?

Faiths and philosophies can be used to buttress the beautiful in human history, or to undermine it. The banners waved matter less than the intentions in the hearts of those who wave them. Let's tell better stories of how people with worldviews like and unlike our own are trying to make a better world. Like Dr. King, let us find ways to make faith relevant to the needs of our time, and to use its light to forge through the dark caverns of hate and injustice.

Interfaith Expert Dr. Rahuldeep Singh Gill directs the Center for Equality and Justice (@CLU_CEJ) at California Lutheran University (@CalLutheran) where he is a professor in the Department of Religion.