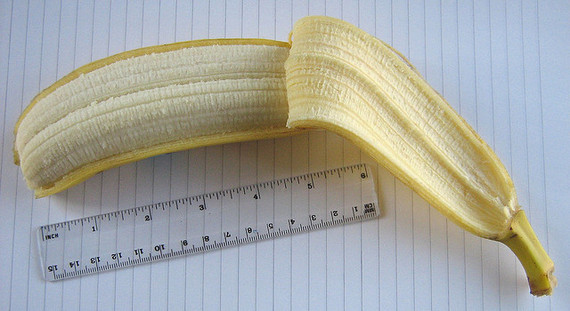 Size clearly mattered to comedienne to Roseanne Barr. When she hosted Saturday Night Live, she joked that her ex-husband, Tom Arnold, had a small penis. Incidentally, when he heard that, he replied, "Even a 747 looks small when it's flying through the Grand Canyon."

But what do most women think about the question: "Does penis size matter for a happy Relationship? In an article by Alanna Vagianos, "33 Women Weigh In On Whether Penis Size Matters," women between the ages of 18 and 15 were asked the question: "Does size really matter?" Approximately one-third of them said, "yes."

The younger women generally said that size didn't matter to them, summing it up with the comment, "it's more about how you use it." Some of the women giggled and replied that size does matter, others said it depends. "Being confident with your body is more important," one woman replied. Another woman answered the question a bit differently, saying, "When you're talking about the heart or the vision, size matters."

In another survey done by Amanda Chatel in news magazine, Bustle, "25 Women Share Their Thoughts On Whether Penis Size Matters," studies have found that 84 percent of women are just fine with the size of their partner's penis. In fact, the people most concerned with penis size are men, because of their fears that a smaller penis makes them less manly. Many men are locked into the belief that "they have to have a gigantic dick," which is clearly something most women don't even want.

Surveys show that while size does matter to some women, there are far fewer who say that it's important. Most women agree it's how a man uses his penis and whether he excels in other areas, because intercourse is just one part of sex; and sex encompasses so much more.

To see how real life women felt about penis size, Bustle asked some of them to share their thoughts on the size debate. You can watch this video to hear what 25 women had to say about penis size.

The Research Findings Are Clear

In an article by Michael Castleman in Psychology Today, he discusses the research study done by researchers at UCLA and Cal State LA. Their published report showed that 84 percent of women felt "very satisfied" with their man's penis size. Fourteen percent wished it were larger and 2 percent preferred it was smaller. The 84 percent figure means that seven out of every eight women thought their man was just fine, and that size didn't matter to the substantial majority of women.

The UCLA study was particularly persuasive because its methodology went way beyond a run-of-the-mill survey of 100 college undergraduates. The researchers posted their questions on MSNBC.com and got responses from 26,437 women ages 18 to 65, which strongly suggests that the findings were truly valid.

What If Your Lover is Insecure About His Penis Size?

Most boys grow up comparing their penis size to other boys. That comparison continues as they enter adulthood, for example, when showering with other young men in school. Then, when men are exposed to adult movies, they see men with extraordinarily large penises and women enjoying them, which causes their insecurities to grow further. So, it's not surprising that many men feel inadequate, intimidated or just insecure about their penises.

Of course, many men are comfortable and secure about their penis size. But even the most secure male can use re-assurance. If you suspect your partner is insecure about his penis, there are some things you can say that will help reassure him that the size of his penis is pleasing to you.

1. Remind him that it's not his size that pleasures you, it's the way he uses it that brings you joy.
2. Let him know that your satisfaction in having sex with him is not based on the physical size of his penis, it's based on the love, intimacy, and affection he shows you before, during and after you make love.
3. Remind him that you love him for his big head - not his little head.

Learn how the planets may be affecting you (and whether or not there is a penis in your future ☺) by going to the Free Transit Calculator and enter your birth date. And, if you're curious to learn more about your personal Horoscope and what it says about your love relationships, career, investments and health in: Order your customized Report: Your Horoscope & Future in 2015-16. Or, a report on - Your Love Compatibility.