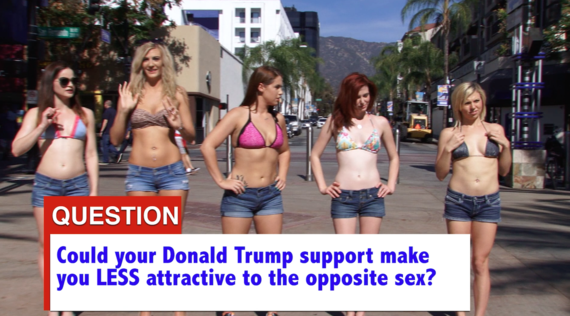 In just a moment, you'll get to see an experiment to determine if support for Donald Trump makes you suddenly less attractive to the opposite sex. But first, some background.

According to a Princeton University study, when we meet someone new, it takes our brain just a tenth of a second to decide if that person is attractive and trustworthy. Our brain is even faster if that person is... Ted Cruz.

Yup. Our subconscious is making choices and decisions before our conscious brain has a chance to influence a reaction. However, the actual correlation between facial features and character are virtually non-existent, yet, our subconscious trumps the rest of our brain's ability to make sound judgments about people.

Especially when they're hot. Or if they have cocaine.

So why is the subconscious so powerful? Evolution favors an ability to quickly detect danger. People who could run away safely were more likely to reproduce. Because, frankly, they got all up in that Neanderthal ass. Which is an actual quote from the origins of species.

And trustworthiness isn't the only assumption our subconscious makes. Scientists have long known of our tendency to attribute even more positive qualities to attractive people. Otherwise, in Gotham City, it's the Joker who'd be the hero.

The question is: why? Why do we link beauty and intelligence?

There are two theories: One, it's a short-cut the brain takes. With so many factors necessary to know in order to make a sound judgment about a person you just met -- it's just easier to assume one positive trait begets another.

In a second theory, intelligence tends to be an indication of both genetic fitness and good health -- which the subconscious mind associates with producing stronger, healthier babies. And thanks to evolution, the desire to make lots of babies is woven into our DNA and the desire to make babies is even more powerful among those families who want to star in a TLC channel reality shit-storm.

BEAUTY & INTELLIGENCE: So, in the experiment seen below, you'll find out how many participants chose the same person as the smartest and the most attractive -- based just on their looks.

DO YOUR POLITICS MAKE YOU LESS ATTRACTIVE? Plus, we reveal if participants changed their mind about attraction when they were told one bad fact AND you'll discover if participants find the subjects of their desire less attractive when their political affiliation is revealed.

Jon Hotchkiss is a 14 time Emmy nominee. Get Be Less Stupid in your timeline 2-3 times per week by liking our Facebook page.