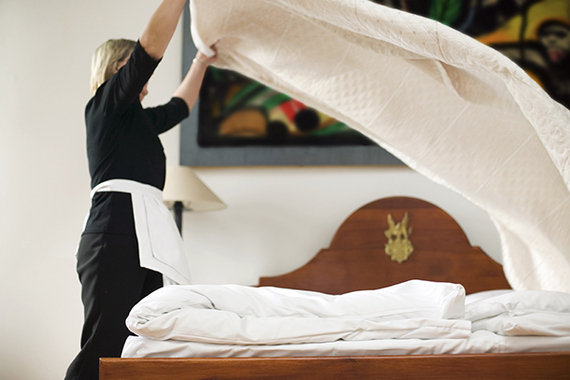 Sometimes people do inappropriate things when no one is looking. Sometimes those people are hotel housekeepers, as was indicated in a hidden-camera video that went viral last November. A clip filmed at a "well-known American hotel brand" revealed a maid messing with a guest's belongings. The housekeeper picked up the man's tablet and attempted to use his computer a few times. Nothing was stolen. The video is below.

Although no crime was committed, the idea of a stranger examining one's personal possessions is unsettling. The video leads me to wonder if my suitcase was ever inspected, my toiletry bag peeked at, or my tablet tampered with. Ideally, no one should rifle through a guest's belongings. But maybe it happens. And if it does, should we really be worried? Is snooping a legitimate concern for travelers?

I asked Jacob Tomsky, author of Heads in Beds: A Reckless Memoir of Hotels, Hustles, and So-Called Hospitality, if nosy housekeepers are a thing. Tomsky told me, "Well, in any business it's possible to unwittingly hire criminal-minded employees. So that can happen anywhere at any job. However, in my ten years of experience, I've found housekeepers to be family oriented and dedicated to the job. And part of that job is respecting guests' belongings."

Related: Can the TSA See You Naked?

Even though housekeepers are likely to be alone in a room with your stuff, Tomsky suggested we shouldn't be so quick to point fingers. He said, "The housekeepers I know are proud to have a decent paying job with health care and wouldn't risk losing that for petty thievery. Plus they know they are first in line for accusations. That's why, when things go missing in a hotel, I always look outside of housekeeping. A lot of employees have keys to your room."

The blame game is pointless. And there's nothing you can do to prevent a housekeeper from opening the closet door and snickering at your poor taste in outerwear. But there are proactive steps you can take to protect your privacy and keep your stuff safe. First, operate under the assumption that your hotel room is not as private as you would like it to be. You are not at home. In any hotel, vacation rental, B&B, or what have you, there is always a chance that theft could take place.

According to Tomsky, "I can't recommend utilizing the in-room safe enough, obviously. If you put in a lock code and forget that code, it's none other than a manager of security who has the ability to reset the lock. So anything in there is touched by you alone. Use it."

Related: OP-ED: It's My Right to Recline My Seat

Tomsky also recommended keeping your belongings well organized during your stay: "Cut down on the clutter. To make a room look clean, housekeepers have to move some items around, especially if your items are splayed out everywhere. And I'd say a great deal of suspected 'theft' is actually just loss. You leave important items all over the place and it's absolutely possible those items will get bunched up with the linens and tossed down the chute into laundry. I've been in the pit, looking for lost items. Only once did I find what we were looking for. Use the safe. And keep it neat."

If you really want to calm your paranoid worries, leave the "Do Not Disturb" sign on your door for the duration of your stay; this way, your room won't get cleaned and you can feel confident that no one touched your unmentionables or flipped through your dream journal.

This article was originally published by SmarterTravel under the headline Does the Hotel Maid Look Through Your Stuff?. It is reprinted here with permission.