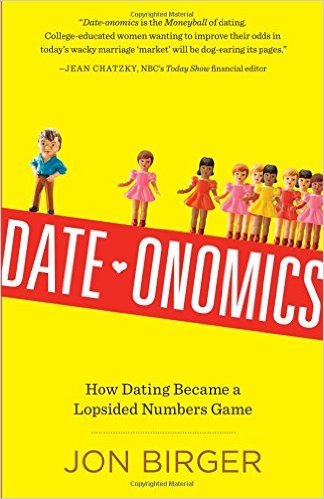 Jon Birger, contributor to Fortune and author of Date-Onomic, How Dating Became a Lopsided Numbers Game, analyzes demographics to explain the "Why am I still single?" or "Why is a nice girl like you still single?" question posed by many unmarried and the people who love them.

Birger notes that most college grads prefer to pair up with other degree-holders and per statistics, college educated women outnumber college educated men in both the 22-29 and 30-39 year old age categories. Education aside, women still outnumber men.

And if you arrive at 40 unmarried, the stats just get worse.

In his Time article, "What Two Religions Tell Us about the Modern Dating Crisis," the author examines the impact on both the Mormon/LDS community and Orthodox/Chasidic communities of what the latter refer to as the Shidduch Crisis. Shidduch is the traditional matchmaking approach to marriage employed by the Orthodox. In a nutshell, the gender imbalance seems to effect even the most ardent of religious adherents.

Birger does a great job at shifting the sort of blame game to probability and statistics. We've heard do much how Swipe and Hook Up has created this major paradigm change, sort of like when you grab a ticket at the bakery. Next.

As Birger explains, the reluctance to change relationship status in favor of casual hookups is in part due to the numbers game. In some demographics, there are 2 to 3 women for every guy.

Birger says, "It's not He's Just Not That Into You - it's that There Just Aren't Enough of Him." Contrary to the advice in most dating self-help books and blogs, perhaps it's not so much about strategy as it is statistics.

In 1985, Newsweek created havoc among the 35-plus single crowd by pronouncing a woman post 35 was more likely to be killed by a terrorist than get married. Thee Harvard/Yale researchers, Neil Bennett, David Bloom, and Patricia Craig, published "Marriage Patterns in the United States" study that went viral in the days before the internet when publications extricated a warning label for unmarried women from the dry statistics.

Even People magazine asked if a cadre of unmarried female celebs were "old maids," citing, "Most single women over 35 can forget about marriage." Newsweek had set the bar at 40. Twenty years later, the news magazine recanted the story but not before the notion became urban legend.

Sure, a fair share of singles maintain marriage, children, and suburban life as a goal but there seems to be a paradigm shift among millennials, many of whom have watched parents divorce or struggle with paying the bills during the economic downturn. Relying on statistics does remove some of the stigma attached to being single post the marriage-able age. "If there aren't enough single guys to go around, maybe it's not my fault!"

The flip side is the theory that single women need to be on top of their game to compete with the others as though they were on some reality show, vying for the final rose and a marriage proposal. Birger's Time article references increasingly younger Mormon singles getting breast implants or Botox and Orthodox upping the dowry to six figures and a matchmaker suggesting "plain" girls get plastic surgery.

Marriages and relationships are much more likely to succeed when we don't put the need to be married or in a relationship ahead of the person we choose. In other words, the person we end up with should be the one we really want to share our lives with, not someone who fits the role.

The practice of changing our personality, values, goals, and appearance to win the prize only works on TV. Sure, we can always strive to improve but the motivation should be intrinsic or because we want to. There's nothing wrong with hitting the gym, changing your hairstyle, or updating your wardrobe. Just don't see it as the means to an end.

And certainly don't pretend to be someone else because you'll be unhappy and eventually, the gig will be up!

The desperation that comes along with the pretty futile statistics can be a gateway to narcissists and other abusers who can smell hunger a mile away. Despite popular advice to streamline your list, don't narrow it so much that it's crumbled in a ball in the bottom of the trash can.

What can we take away from Birger's book and do these statistics spell doom for anyone who isn't coupled?

Like I advise anyone who aims for a competitive career, put on blinders and don't let the competition scare you away! Be yourself -- or the iOs upgrade of yourself - and perhaps you'll find a good complement. Along the way, just enjoy life, grow and maintain friendships, find work that fulfills you. Be whole on your own instead of depending on your "other half" to increase your value.

And don't forget that dating can be much more fun without an end game!