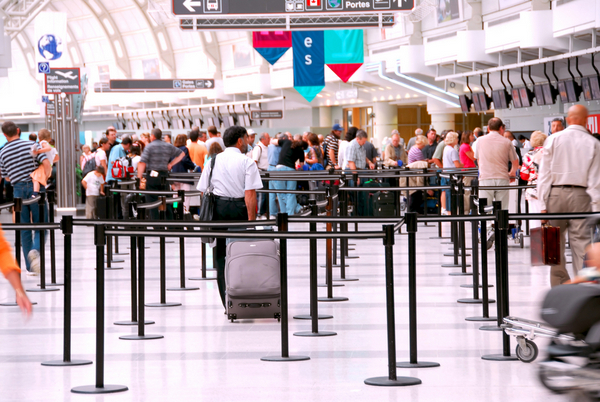 And like most Americans, he wasn't surprised when a new Government Accountability Office study revealed widespread TSA employee misconduct, including screeners involved in theft and drug smuggling activities, as well as circumventing mandatory screening procedures for passengers and baggage.

All of which made his recent experience in Philadelphia so noteworthy. As he waited in line to have his ID checked, he saw three elderly men approach the checkpoint.

"One of the gentlemen had clearly not been on a commercial flight in some time," he says. "He presented his Medicare card and then his library card as his ID."

The TSA agent was polite and explained the ID requirements to the passenger. Then he helped him find the right card. A long line quickly began to form behind him.

"Another agent saw what was happening and opened another line so as not to slow down other passengers," remembers Davies, who works for a nonprofit organization in Pittsburgh. "The entire transaction was completed in a polite and helpful manner. I don't know how, but somehow the gentleman cleared the identification process."

The TSA agent didn't see what Davies did: From the back, the elderly man's jacket identified him as a member of the legendary Tuskegee Airmen, a group of African-American pilots who fought in World War II. He'd helped a war hero get through security.

For every TSA agent who steals, cheats and abuses there are hundreds, and perhaps thousands, who do an outstanding job of protecting America's transportation systems every day.

There, I said it. The TSA sometimes gives you good service.

Maybe it's time to recognize these small acts of selflessness. After all, with employee morale as low as it surely must be, do the TSA's frontline employees have any reason to perform beyond expectations?

Cleanup on aisle one

On a recent flight from Washington to Orlando, I queued up at the TSA screening just in front of a new mom holding her baby. Since I don't trust the agency's full-body scanners, I was mentally preparing for what would come next: an "enhanced" pat-down that may -- or may not -- be done by the book.

I was surprised when, at the end of the long corridor, I didn't see one of the TSA's feared full-body scanners. We would all be screened the old-fashioned way, with the highly effective magnetometers and luggage X-rays. I breathed a sigh of relief.

The mood at the screening area was relaxed. The agents waved passengers through the magnetometer one by one. I walked through and then looked to the conveyor belt for my luggage.

"Oh no!" the woman behind me gasped.

The TSA agent screening her was unfazed. He offered her a reassuring hand and told her not to worry. Then he asked a colleague to help him clean the mess.

I have three kids, all of whom experienced at least one event that I refer to as a "splooch-through." I can assure you, I wouldn't have blamed the agent for backing away and ordering Mom to clean up after her baby.

My luggage, cell phone and wallet emerged on the other side of the conveyor belt and I reached over to grab them, losing sight of the incident. But the image of a TSA agent helping the new mother will always be with me.

This probably isn't the kind of thing they train TSA agents to do. It's something the agent's parents taught him: patience, understanding, helpfulness. That screener is a credit to his organization, and to his family.

Turning the other cheek

A good TSA agent doesn't just perform well when a baby or old war veteran needs to get screened, but under a high-pressure situation. For example, when outraged passengers challenge their right to inspect their personal belongings, which happens from time to time.

Davies had a front-row seat to such a confrontation on another flight from Las Vegas to Detroit. The flight was delayed for 30 minutes because of thunderstorms.

"I was the second person in the Sky Priority line, behind a Diamond-level passenger who was clearly already in a bad mood because of the flight delay," he says, adding, "I guess Delta should have been able to control the weather."

Just prior to the pre-boarding, five TSA agents showed up. As any frequent traveler knows, that means they'll be conducting a secondary screening at the gate.

"This flight is already 30 minutes late," the elite-level passenger barked at one of the TSA agents. "Why pick it when all you are going to do is make us even later?"

"Sir," the agent replied, in a polite, non-confrontational tone, "our mission is to ensure safety for the travelling public and I can assure you that our efforts here will in no way delay the flight."

"You are not ensuring my safety," the passenger hissed. "Your job is worthless."

To which the agent calmly responded: "Sir, we have been given a job to do here and I'm sorry if you feel it is worthless."

The flight wasn't delayed, by the way.

"We can agree or disagree about the merits and mission of the TSA," adds Davies. "But the agent on the ground is an employee following instructions from more senior management. I thought she handled herself very professionally."

I think it's time to recognize good service from an agency that isn't known for it. How else will the TSA know what it means to serve the public it's assigned to protect? Sometimes, the little things matter much more than anyone can imagine.

After you've left a comment here telling me that if I don't want to deal with the TSA, I don't have to fly (oh yeah, that's the first time I've heard that one!) let's continue the discussion on my consumer advocacy site or on Twitter, Facebook and Google. I also have a free newsletter and you'll definitely want to pre-order my new, amazingly helpful and subversive book called How to Be the World's Smartest Traveler (and Save Time, Money, and Hassle). Photo by Elena Elisseeva / Shutterstock.com

US Presidential Election 2020
Breaking news, analysis and the latest polls on the presidential race from HuffPost’s politics team
See More
Voting Made Easy
Register to vote and apply for an absentee ballot today
Register now
More:
customertsa-regulationsgaoreportpoll
Newsletter Sign Up
An essential daily guide to achieving the good life
Subscribe to our lifestyle email.
Successfully Subscribed!
Realness delivered to your inbox