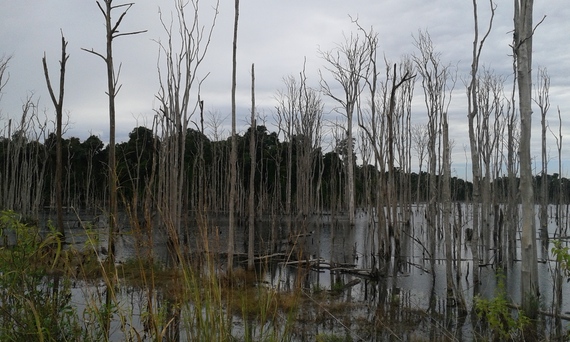 The Nam Theun 2 reservoir in Laos

The World Bank will hold its Annual Meetings next week in Lima, in the face of stiff competition from new lenders like the Asian Infrastructure Investment Bank. The Bank will make the case that it has the know-how to responsibly build a new wave of dams and other mega-projects. Central to the Bank's case is the example of the Nam Theun 2 Dam in Laos, which the Bank approved in 2005 and continues to tout as a model. But 10 years on, does the World Bank's purported success story still hold water?

In 2005, the World Bank agreed to support the Nam Theun 2 Dam after an extended hiatus from financing dams, having largely withdrawn from the sector following controversies surrounding the impacts that its dams had wrought. The Bank claimed that Nam Theun 2 would usher in a new era in responsible lending for dams, calling the project a "test case" with "the potential to be broadly replicated."

To its credit, the Bank invested an unprecedented amount of time, money, and manpower into trying to secure a positive outcome from Nam Theun 2. Unfortunately, the Bank's claims of success do not reflect the reality on the ground, as pointed out by a member of the Bank's own independent Panel of Experts, Prof. Thayer Scudder: "Nam Theun 2 confirmed my longstanding suspicion that the task of building a large dam is just too complex and too damaging to priceless natural resources."

Ten years on, as the Bank holds up Nam Theun 2 as a model investment to justify scaling up its lending for large dams from Niger to Nepal, it's time to take a closer look behind the Bank's claims.

Reality: As 95% of its power is exported to Thailand, the project's development rationale has always rested on generating "revenue to be used by the government to reduce poverty." However, despite having guaranteed that revenues would be used for priority development programs, the World Bank admits that more than half of revenues are unaccounted for, a share that is in fact increasing.

This is particularly concerning as the World Bank backs the export-driven, $14 billion Inga 3 Dam in the Democratic Republic of Congo under the same flawed assumption that revenues will be used for those most in need.

Myth: Resettled communities are better off than before the project.

Reality: Nam Theun 2's is perhaps the most ambitious resettlement program the Bank has ever undertaken, investing $40 million with its co-financiers and substantial staff time into the process. As a result, resettled families now have better local infrastructure because of the project, including electricity, roads, and schools. However, resettled communities still struggle from the loss of their livelihoods, principally farming and livestock rearing, given the poor quality and small size of their lands, and thus lack the means to provide for themselves. In the long run, the ability to make a living will decide whether the displaced people end up better or worse off.

The Bank appears to be repeating this mistake at the Kandadji Dam in Niger where, despite a benefit-sharing program to fund community projects, over affected 30,000 people lack viable livelihood alternatives to replace their traditional, flood-recession cultivation methods and fishing.

Reality: The dam has caused major impacts on 120,000 people living downstream suffering declining rice yields and dramatic reductions in fish catch, which had previously been the cornerstone of local livelihoods. The Bank instituted a Downstream Program to blunt these impacts, but the program was handed over to the Lao government after less than three years of operation and terminated prematurely when the funds ran out.

History could well repeat itself as the Bank supports the development of the Fomi Dam in Guinea, which would entail massive disruption downstream in Mali. Nearly 2 million people - pastoralists, rice farmers and fishermen - rely on the annual flooding of the Inner Niger Delta, one of Africa's largest wetlands, to provide grazing land and fertile floodplains, and to sustain and replenish fish stocks.

Nam Theun 2 was supposed to be different, with the World Bank going above and beyond to offer a positive model for managing the risks that large dams pose to the environment and to communities, and delivering genuine development. Yet as the World Bank again invests in large dam schemes with the promise of "sustainable hydropower," it has unfortunately failed to learn from its past mistakes.