One of the most prevalent conversations in the media regarding women and pregnancy is... (dun dun dun) baby weight. How much did she gain, how fast is she going to lose it and will she ever get back to her own original birth weight of, say, seven pounds six ounces? Call me old-fashioned, but doesn't obsessing about our bodies take away from those quite introspective moments of getting to know your newborn? Besides, I am not sure your baby is looking for rock-hard abs to snuggle up next to.

Recently, there has been an aggressive backlash around uber-fit women showing off their post-baby figures. There was the perfectly-sculpted mom with the three kids all under the age of 3 taunting "What is your excuse?" and the fitness blogger taking a selfie to show her flat stomach four days after birthing her daughter. So, here are two women who exercise, eat healthy and have good genetics, showing the possibility of an enviable body after baby. I also once saw a video of a breakdancer doing a backflip and landing on his head. Why should the expectations for me to be like any of these people be any different? Comparing ourselves to each other rather than focusing on our own individual health is where the problem lies.

The female body is one of the most scrutinized objects on the planet. Not only do we examine other women's bodies as if they were undiscovered fossils, but ladies also inspect, dissect and pick apart their own form with the scientific precision of a Nobel Laureate. Most women are so hyper-aware of their perceived flaws that they could tell you their least favorite body part faster than they could remember their mother's birthday. "My chin... and ummm... I think February 11." See what I mean? The female body is objectified on a variety of platforms and the collective consequence penetrates deep into the female psyche. Ew. That sounded wrong. The question remains: How can women stop the hypercritical relationship they have with their bodies and begin to have a genuine, loving dynamic with them?

One answer? Appreciating function over form.

It is time pregnant women and new moms acknowledge something -- our bodies are amazing! We can grow and incubate a human, defy all laws of physics by giving birth and sustain life with food that comes out of our fun bags! Can we take a moment to appreciate the miracle of it all!? Only when we value the functionality of our bodies will we finally honor them.

Yet, accepting our bodies doesn't mean giving up, eating crap or not prioritizing health. Part of what is hard about issues pertaining to weight is the extent to which our culture is exponentially less active than our ancestors', and how our food system has been corrupted by chemicals, GMO's, pesticides, sugar, additives and trans fats -- all of which effect the body's capacity to process and digest effectively. I don't think a cave woman had a problem losing extra baby pounds as she most likely squatted out her child in the open tundra and then had to walk the 90 miles back to her cave after foraging for a few berries along the way. We live in an era where we have to find a place to move our bodies, have the money to pay for classes, figure out who can watch our children and most importantly, have the access and resources to support a healthy organic diet of kale and flaxseeds. These are not impossible options, but rather than shaming each other, we need to support one another so they can actually be accomplished.

It's absurd that women are told to concern themselves with superficial questions about their form immediately after giving birth when they could instead be celebrating the incredible accomplishment of gestating a creature. We fall into this trap because society has this preconceived notion that skinniness implies virtue. We place undeserved value on one group, while imposing shortcomings on another group, as if there is a correlation between body fat and being a good person. You may have taut buns, but that doesn't mean you are a good tipper -- or the perfect mom. Having tight "glutes" just means you look good in jeans. I always try to remember that being active gives me energy to play with my daughter and run after her in the park, not feed the vanity machine or the expectations of tabloids and fashion magazines. 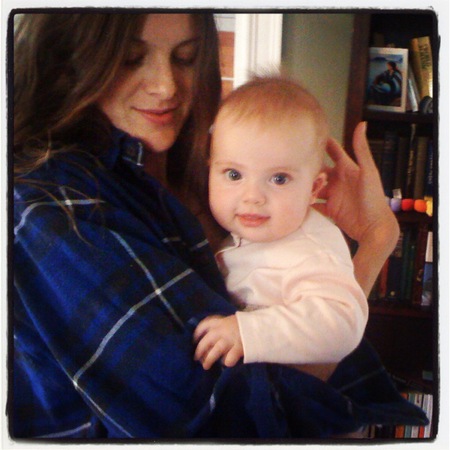