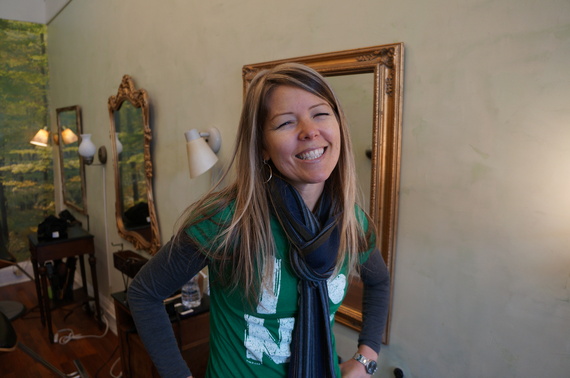 I cut my hair last month. Let me rephrase: I shaved my head. After eight years of long, mostly natural hair, it was time. The seed had been planted over a decade earlier, when I first volunteered as a hairstylist for a St. Baldrick's event. Over the following years the seed was fertilized and watered by various clients who shaved their heads without regret, reveling in the liberation of packing away the blowdryer and hair products.

Once it was decided that I would be going through with it, I opted to join forces with the St. Baldricks Foundation. I mean, if I was going to shave my head, I might as well raise money for a good cause. Also, once I wrote the fundraising email and clicked "send," effectively notifying everyone around me about my intended plan, there was no chickening out. It's not like I was scared, but we tend to get attached to these things about our appearance, relying on them out of habit. I knew I would not be ugly with a shaved head, but I honestly had no idea what to expect. I didn't know what my head shape would look like, what the birthmarks on my scalp would look like, or what my hairline would do, so I was slightly apprehensive, against my better judgment.

In addition to my own apprehension, which was constantly doing battle with my stubborn aversion to coddling my vanity, I was barraged with outside opinion. It was surprising how many individuals, friends or family, peers or acquaintances, felt strongly about my choice.

"Can't you donate your hair without actually shaving it?"

"What about a pixie?"

"It's not too late to change your mind."

"You are going to look super-butchy."

"How much do I have to donate to get you to not shave your head?" (That one was from my mother.)

What's the big deal? It's just hair. And it's my hair. And yet everyone around me had to slip in their say, which didn't succeed in undermining my decision at all but did succeed in chipping away at my confidence. I knew that that wasn't anyone's intent, and certainly I didn't want to let it affect me, but this confident girl can only take so much before she starts to feel the eroding effects of offhanded comments.

The day came, and a few friends gathered around while my best friend shaved my head. I donated over a foot and a half of hair through Pantene and raised $1,900 for St. Baldrick's. It turns out that my noggin is not that bad shorn, though my birthmarks look like cheetah spots. It feels great to have friends and strangers rub my shaved head (though now it has grown a bit, so I get fewer rubdowns), and yes, it is as liberating as promised -- beyond liberating.

The comments and opinions have only increased, but at least now that people see what I look like, they tend to be more positive. Again, I am startled by the vehemence of opinion shared by others about my hair.

"You look super-butch, and I love it." Awesome.

"Your hair is so gay now, but you're still cute." Thanks? Wait, is gay normally not cute?

"I just want to take that shaved head and [fill in explicit adjective and verb here]." Take it easy! 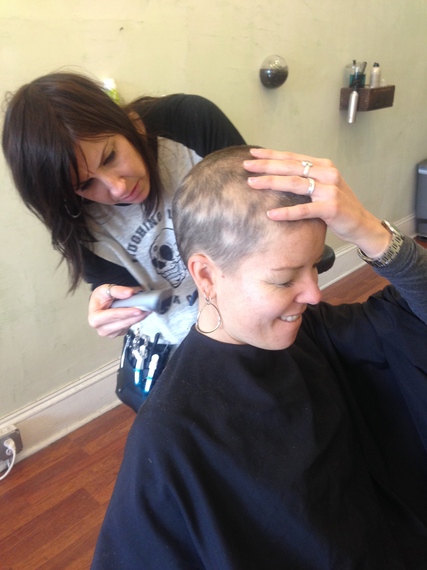 What I find fascinating is that I went from bi invisibility due to my long hair and "straight" appearance to bi invisibility due to my short hair and "gay" appearance. I had no idea that so many people would feel so strongly about my appearance and my head of hair. Though I struggle with the threat of insecurity awaiting a harsh comment or judgment, I have to admit that I have never felt more confidence walking into a gay bar. Whereas before I would rarely get a wink or a nod, often feeling eyes swish right past me, now I have the ladies making eyes at me across the room. It turns out that I should have done this a long time ago, back when I was single. Does this haircut make me look gay? Who cares?

If you have ever had an itch or an inkling to cut your hair, or even better, to shave your head, just do it.