Trigger Warning: anti-trans, transmisogynistic and vulgar language and phrases. If you decide to share this piece,please include a trigger warning in your post. Thank you. 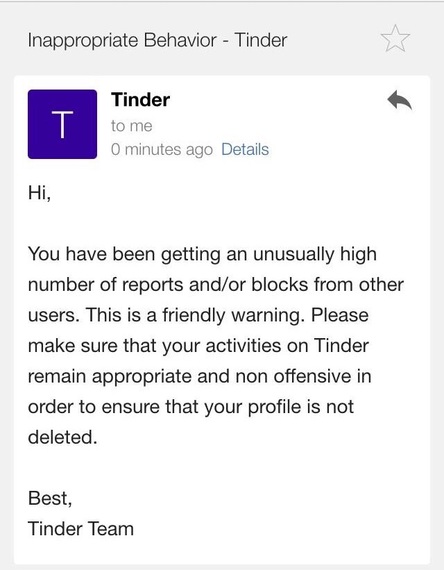 The following is the email I sent to Tinder the day after receiving a message on March 21, 2016 stating that I had yet again been reported and blocked too many times:

I received an email yesterday saying that I've been reported or blocked too many times and to be more appropriate on the site or else I'll be deleted.

Here's the thing: I'm trans (transfeminine genderqueer to be specific), and I have my identity clearly displayed not only in my bio but also in my very first profile picture. I even go as far as to simplify my identity to "not a man or woman, just an AMAB feminine being." I also always bring it up in my conversations by my third or fourth response just to make sure others are aware, so don't think I'm hiding this or tricking anyone. 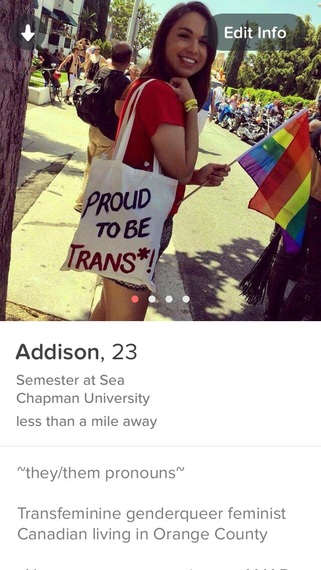 My Tinder profile. Note that "trans" is displayed both in my primary photo and at the top of my bio.

Funny thing is, many people I talk to end up "disappearing" right after I bring that up, or after they've asked invasive questions about my genitalia and I've either been honest or not answered due to the nature of the question (sometimes I report or block them but I guess I'll never know if they too have received warnings or been under review). People have also "disappeared" just after saying hello or not saying anything at all, and I assume they unmatch, report or block me once they actually read my profile. 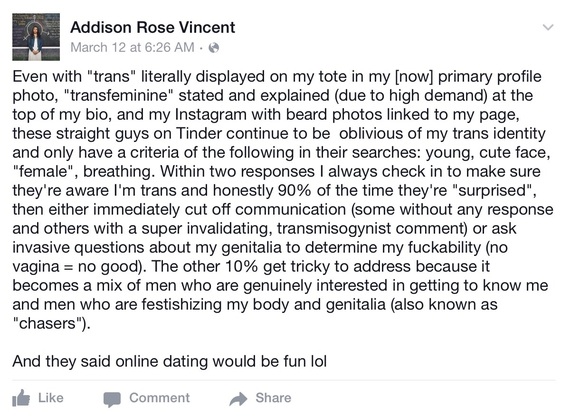 So here's my take on it: there have been many people, especially men, who will quickly swipe right on my profile without even bothering to read the "PROUD TO BE TRANS" in my picture or anything in my bio, then when they finally do read it or I bring it up they freak out and block or report me because they're transphobic and/or feel that their fragile masculinity or heterosexuality has been threatened. But who's being punished in this situation? The trans person who has been completely transparent about their identity since starting Tinder, or the men who don't actually look at the people they swipe right for? 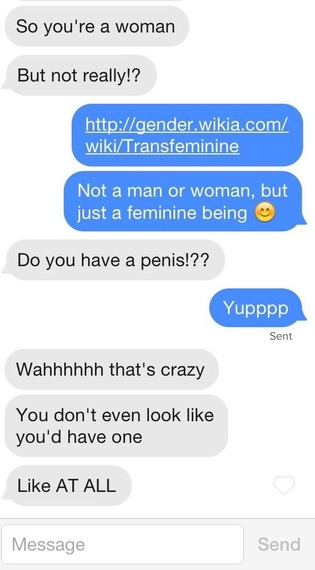 An example of a "back-handed compliment."

I started Tinder on March 10, and by the morning of March 12 I was "under review" for too many reports and blocks. I couldn't log into my account for 4 days, and after being on the site for just 6 more days I've received this warning. This is honestly ridiculous, and since I never received a notification when the review process was over I wonder how thorough the review process is and if I'll continue receiving warnings or penalties for doing nothing wrong, for just existing as trans on this app. 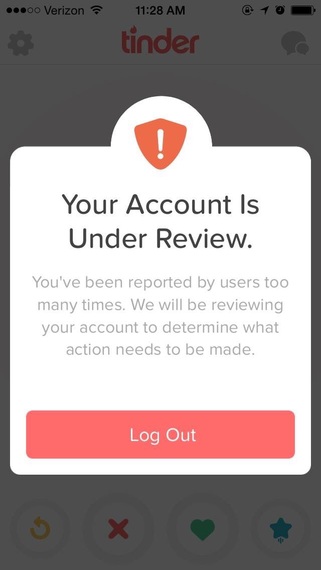 This is all that would pop-up if I tried to use Tinder between March 12 and March 16.

Some of my trans friends who have used Tinder have expressed similar experiences of coming out to people and being blocked, of being transparent on their profiles and being reported, of being nothing but kind on this app and still being deleted just because of their identities. My situation is not unique. From how it looks, Tinder and the people who use it have a transphobia problem, and the way that it's being approached seems to be in an anti-trans way. 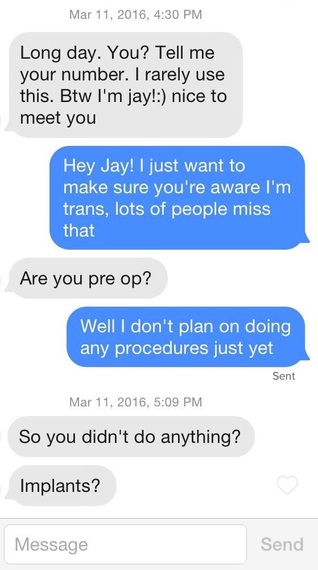 An example of how trans folks, especially trans women and femmes,
are constantly reduced to our genitalia and procedures.

Here's what I need: a thorough investigation of reports against me and the conversations I've had, followed by an apology since you'll find that I've done nothing "offensive or inappropriate" on your app (unless you consider existing as trans as offensive), as well as for you to take into consideration implementing more sexual orientation and gender identities (especially nonbinary ones) into profile settings for users. Let's admit it, your app is rather limiting, and in a time where trans visibility is higher than ever and more people are coming out somewhere on the LGBTQ spectrums, it's time to get with the times. 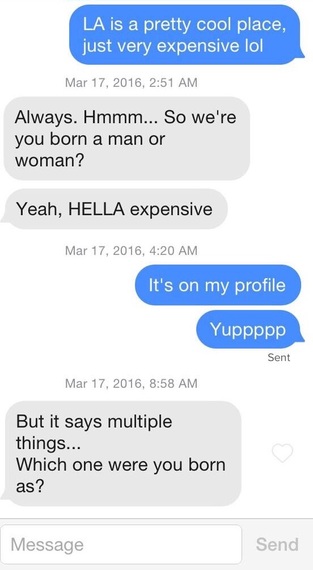 Yet again reduced to my body parts and at-birth sex.

I hope to receive a response very soon, and if you decide to ultimately delete me at least give me the opportunity to provide my contact info to the decent people I've been chatting with. Have a great day. 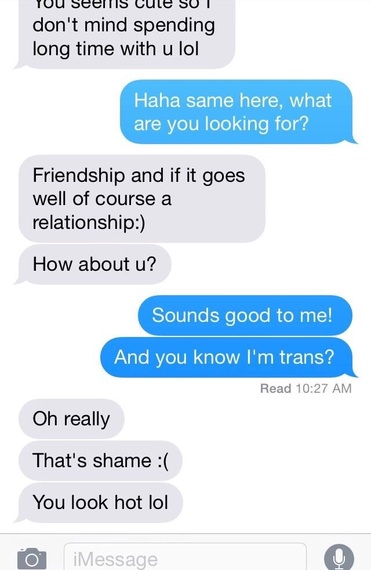 Text conversation I had with another Tinder user.

I should note that Tinder isn't the only online dating site with an anti-trans problem, but the first one I've encountered where reprimands were taken again me by the app's controllers. Using OK Cupid was an incredibly awful experience for me, and the messages I received from other users were especially hurtful, sexualizing, objectifying, fetishizing and reductionist.

Here are a few: 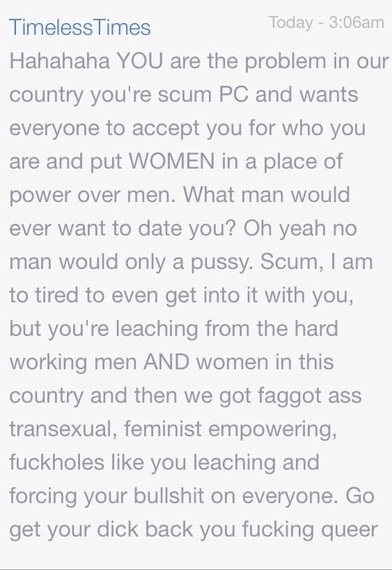 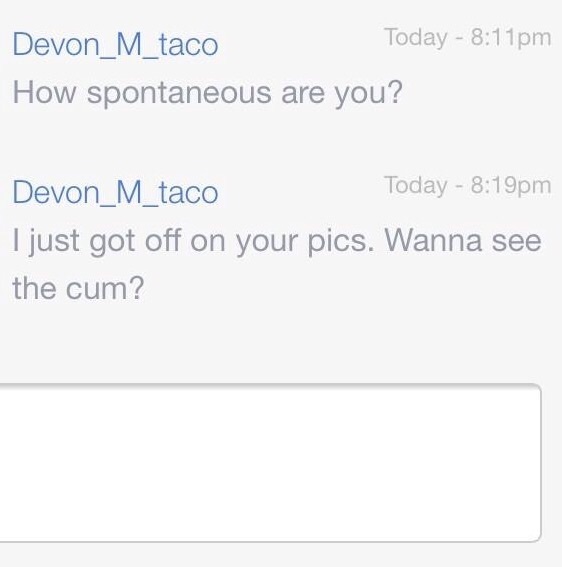 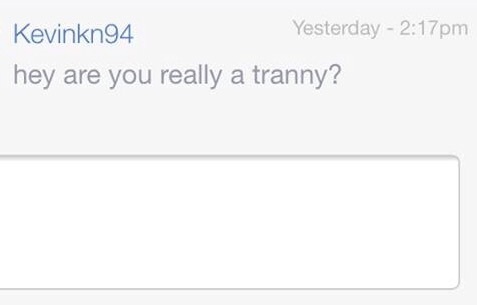 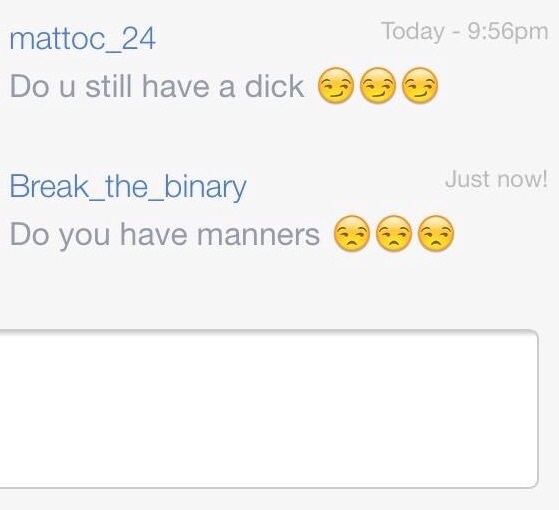 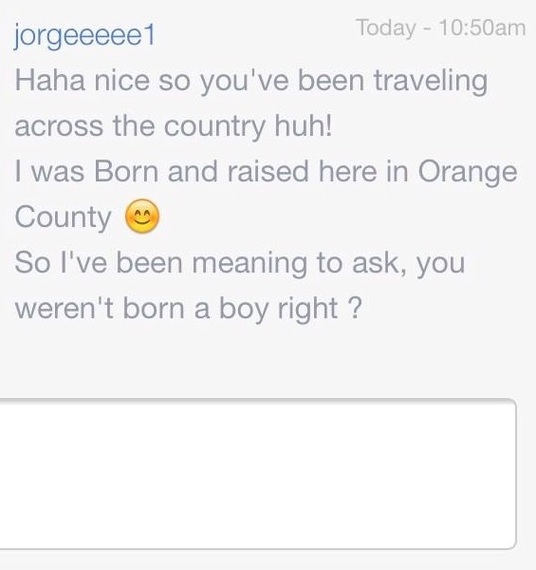 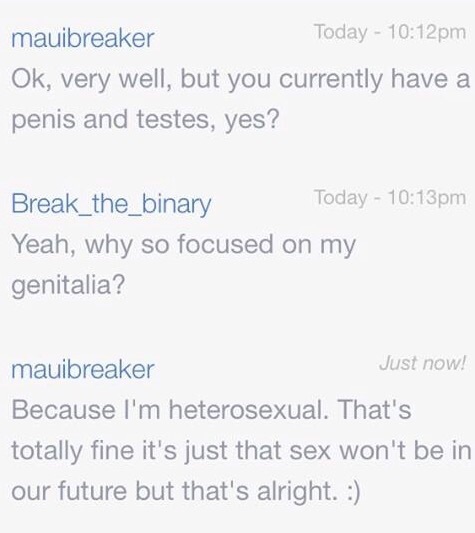 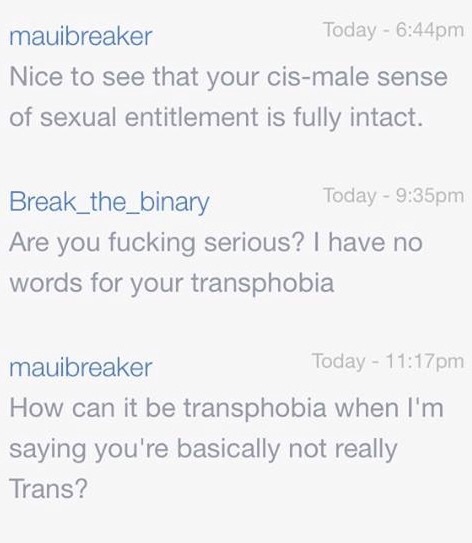 Prince Charmings, am I right?