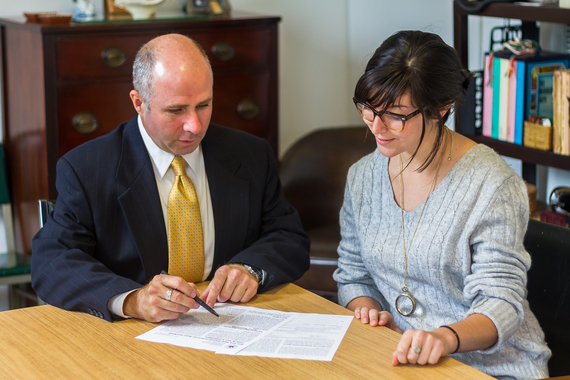 After spending a few weekends visiting me on the east end of Long Island, my mother suddenly got the Hamptons bug and wanted to go house shopping. There was some breathtaking inventory, and a particular condo really caught her eye. On my mother's behalf I contacted the listing agent for a showing and we explored the possibilities.

At the showing my mother inquired whom the agent worked for, the seller or the buyer, and the agent replied the seller. Quickly, the agent followed her answer by advising my mother that she shouldn't worry because as an agent she is honest with everyone and those stupid agency disclosure forms don't really mean anything anyway. This sentence really disturbed me as an attorney who practices in real estate brokerage license law and as an owner of a real estate continuing education school, Lieb School, which offers regular courses on brokerage ethics.

After we got out of the unit I quickly explained to my mother that the form that the real estate salesperson was downplaying actually means quite a lot. In fact, if the salesperson was treating both the seller and buyer equally, as she implied, she was breaching her fiduciary duties to the seller. If instead she was lying to my mother to motivate a deal (i.e., mitigating my mother's worries) while remaining loyal to the best interest of the seller, then she was breaching her statutory duties to my mother. Why did the salesperson neglect to advise my mother of her rights by not clarifying the salesperson's allegiance in the deal while my mother was considering such a major purchase for her life? The agent had perpetuated untrustworthiness in real estate brokerage.

I told my mother that New York's highest court, the Court of Appeals, had explained that the New York State Disclosure Form for Buyer and Seller found at Real Property Law §443 and first instituted in 1991 "sought 'to address an issue of paramount concern to the Secretary of State'; specifically, although brokers and salespersons were required to make clear whether they represented the seller--as was traditionally the case--or the buyer in a residential sales transaction, '[t]he lack of a requirement that the information be provided in writing and in a uniform manner...resulted in uneven disclosure which too often...failed to eliminate confusion on the part of buyers or sellers as to the loyalties and duties of agents with whom they [were] dealing'" in ruling in the seminal case of Rivkin v. Century 21 Teran Realty LLC back in 2008.

The form explains that a seller's agent owes the seller six distinct and important fiduciary duties, including confidentially, obedience, loyalty, accountability, full disclosure and reasonable care. In working with the buyer, that same seller's agent must deal honestly, as the agent had accurately advised my mother, but that is not all. A salesperson must also deal with a buyer that it does not represent fairly and in good faith as well. Still further, in working with a buyer, a seller's agent must exercise reasonable skill and care in the performance of his or her duties while also advising the buyer as to any facts that the agent knows that materially affect the value or desirability of the property. This last part is quite a limitation to the confidentiality offered to the seller.

My mother looked confused by my explanation, so instead of continuing with this legal mumbo jumbo I explained that the purpose of the form is to clarify that a real estate salesperson has allegiances to a specific side in a transaction and a vulnerable consumer like my mother has a right to understand what side the agent is on when negotiating a deal. As the Court of Appeals said, the form is meant to eliminate any confusion.

I went further and explained to my mother that New York State permits agents to work both sides of a transaction. I explained that there are two different levels of conflicts of interest that can occur in real estate brokerage and that this form gives the seller and buyer to a transaction an opportunity to knowingly waive either, neither or both of these conflicts. One conflict is with respect to the individual real estate salesperson acting as a dual agent where the agent's fiduciary duties are compromised and the same individual salesperson is working for both sides of the transaction and passing information back and forth between the parties. The other conflict of interest is with respect to the brokerage company as a whole and is called "dual agent with designated sales agents." In the latter conflict of interest the brokerage company may have a designated agent working for the buyer and a different agent working for the seller where management's allegiance is conflicted throughout the deal.

Next time you work with a real estate salesperson, ask them to give you realistic expectations and it will be a better transaction for all involved. Say, "Don't you have a legal requirement to give me an agency disclosure form and to ask me to acknowledge my receipt thereof?"

This article was written based on New York law and those working with real estate salespersons in other jurisdictions should check their local law for the rules applicable to brokerage.

Adapted from this Behind The Hedges article.