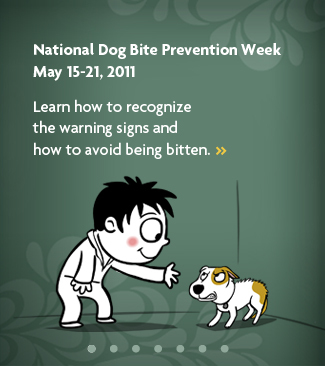 With 78 million pet dogs in the United States and a nearly 50 billion dollar pet care industry, it's clear that Americans love their pets. It's National Dog Bite Prevention Week, which brings to light one solemn fact: In spite of the adoration we have for our pooches, over 4.5 million people -- both adults and kids -- are bitten by dogs every year. Nearly a million of these bite cases are severe enough to warrant treatment in a hospital.

This may be surprising to the ordinary dog owner but to those in the field -- animal control officers, applied animal behaviorists, or, like me, a veterinarian practicing in behavior, it's a wonder there aren't more!

One person who knows the reasons all to well, is Dave Dickinson, interim director of the Sacramento County Animal Care and Regulation

Dickinson describes one common scenario, "People get bitten because they see a dog they don't know. It's not acting aggressive. It's just kind of walking around. They go up to it and they think the first thing you should do is put their hand out and let the dog sniff your hand."

This may surprise most people, but even though we are commonly told that we should greet dogs by reaching out, in actuality, this can be very scary, especially if you're a stranger to the dog.

Dickinson explains, "The dog doesn't know you're reaching out in friendship. You're just coming at them. A lot of times people get nipped that way. It's just the dog's way of saying, 'You're in my space. Stay away from me. I'm not interested in you right now.'"

Ruben Hernandez, the supervising animal control officer at Sacramento Animal County Animal Care and Regulation, agrees with Dickinson, especially in regards to dogs who are roaming or loose.

"[People] don't take into account that this is a dog that's scared, that is loose, and more than likely has not been around any other people than it's family."

As a result when people call and report a loose roaming pet, Hernandez and his officers have a routine answer they give. "We always tell people we are professionals, we want them to use our service. Most of the time we tell people not to approach. They own dogs and love dogs. It's a person's natural inclination to want to help, The thought of a dog being in the street and defenseless [makes them] want to help."

In spite of the warnings, some people want to do something and in that case Hernandez offers additional tips, "We say, no abrupt movements. Don't do the overhand pat on the head. Don't run at it or chase after it or scream at it because it's in the road and you're trying to catch it."

The Family Pet Can Bite Friendly People Too.
While these are general recommendations for dogs who are roaming, they are also good recommendations for household pets. It is not just stray or roaming dogs that are fearful and defensive towards new people. It can and often is the family pet.

Hernandez remembers one incident during his childhood when they adopted a stray German Shepherd and had it for a week.

" It was friendly to us after a week. It got acclimated to our family, so I thought the dog would love everyone."

When Hernandez's neighborhood friends came over, he found out differently, "Of course, the dog reacted to us playing and screaming in the backyard and it just jumped up and bit my friend in the rib area." The friend had to go to the hospital and was wary of the dog for some time after that.

With this new understanding he was more careful after that and his friend and his dog did eventually get along well with each other.

This lesson that Ruben learned about relationships is a key one. While you may be able to suddenly reach out for your own dog and pet him roughly or put your face in his face, if you do the same thing to another dog, even one who knows you well, it may make the dog uncomfortable, even to the point where he snaps or bites. When you think about it this makes sense. You can joke around with and even run up to and hug friends on the street, but with strangers and even with co-workers or acquaintances, those same behaviors can been seen as a threat, insult, or just plain rude. If you randomly tried to perform these behaviors with people around you, many would put up with it, but eventually someone might attack you.

These rules of comfort and safety extend to dogs that you do know fairly well too. It's important to realize that just being around a dog a lot does not mean the dog likes you or feels comfortable with you in all contexts. And just because a dog is friendly to you when you are being polite does not mean he will be comfortable when you are being rude or interacting inappropriately.

Hernandez describes one case of a family who took their Cocker Spaniel as well as their child and her friend on vacation in a camping ground. It was the first thing in the morning and their dog was tied out with them.

Say Hernandez, "The kids both walked up to the dog and the little girl knelt down and put her face into the dog's face to say good morning. The dog severely bit her in the face."

To the child's parents, the bite appeared out of the blue. Even to the dog's owners it was unexpected. But says Hernandez, "When I was reading the report, a lot of things went through my mind. I asked why was her face in the dog's face? Even if she knew the dog, why was she doing it? Where were the parents? What did they know about the dog? I was thinking of all the ways this incident could have been avoided."

In the case of the Cocker Spaniel it truly could have been avoided, especially since the dog did already have a history of biting or nipping. Unfortunately owners tend to think that nips are a fluke since they don't occur every time in the given situation. It may take five to ten nips or minor bites or a few more serious bites before owners realize it's a problem. Even when they realize there may be a problem, owners often ignore the issue because they have no idea why the dog is aggressive or what they should do. This includes not considering that they should keep the dog out of the trouble situations.

It seems that avoiding problem-types of interactions should be common sense but clearly is it not common sense to everyone. Says Hernandez, " In the 12 years I've been here it's a none too familiar story. 'He just went to take the dog's toy. He's just a toddler and he fell on the dog. There was no initial introduction into the house.'"

Most cases of bites are an accident that has been waiting to happen many times over and the owners or humans have just been lucky.

The overall take home message so far though is that people need to learn how to interact appropriately with dogs and to read the warning signs that the dog is feeling uncomfortable.

Hernandez also stresses that the dog owner has to take responsibility. "With dog owners I'm hearing [them say] that it's someone else's fault. 'This is my dog and how dare the child ride a skateboard on the sidewalk or how dare these kids scream and run like kids do in the front of my house' " he states. What they should be asking according to Hernandez, is "What am I going to do to get my dog accustomed to the normalcies of life." Because children and people just walking, doing their own thing is very different from those who interact with the pet inappropriately.

Both dog owners and people interacting with dogs should take responsibility, realistically it goes both ways because, no matter what, the consequence is bad for the dog.

"Any time a person is bit even if the dog is reacting [fearfully] to something the person did, people think the animal is dangerous and aggressive regardless of the circumstances. Most of the time they say it's out of the blue or uncharacteristic of the animal but when you delve further and ask about the type of interactions and training [and socialization] you find that there's a huge void between having an animal and having it be accustomed to being around new people and new situations.

That is, most of these animals are fearful because they did not receive enough positive experiences around many people, environments, and animals during their early puppy sensitive period of socialization and through adulthood.

The result is that these dogs are fearful and then they get into a situation where they bite to defend themselves. Ultimately many are euthanized due to human irresponsibility -- either lack of socialization, lack of keeping the pet safe on the owners part, or inappropriate interaction on the part of the person being bitten.

Regarding the case of the Cocker Spaniel, Hernandez states, "I the [owner] knew that the Cocker bit already, they should not have had him there. But on the other side, what type of person would tell their kids that is ok to put their face right into the face of a dog."

Hernandez concludes, "The debate can go either way. But in the end everyone shares a little responsibility in ensuring their pet and their children and [they themselves] are safe."

To learn how to recognize the signs of fear and anxiety that can become precursors to aggression, read "Dog Bite Prevention: Dogs Bite When Humans Greet Inappropriately" and watch the related videos

To download a free poster illustrating the body language of fear and anxiety, go here