"Your dog has cancer." I felt surprisingly calm when the veterinarian said those words to me. I must have been temporarily stunned.

My husband and I had been awaiting the results of a biopsy taken a few days earlier after my dog, Peebucks, had a severe and uncontrollable nosebleed. I worked from home for a few days afterwards, afraid to leave him home alone in case the bleeding reoccurred. When the phone finally rang, a wave of anxiety swept over me. (Over the years, I've come to hate the sound of a phone ringing. Bad news so often travels by phone).

I heard the words the doctor said, but they just swam around in my mind disconnectedly. "Nasal carcinoma." "Undifferentiated." "No metastasis." "Prognosis poor." "Treatment: radiation therapy, chemotherapy." "Maybe we can increase his life by a year or two, but this will probably kill him."

After the initial calm, I got off the phone and collapsed into a sobbing mess. Peebucks ran over to comfort me, licking the tears from my face. He had no idea why I was crying of course, but he has always been an incredible consoler. When my maternal grandmother died, Peebucks was there. When my paternal grandmother died, Peebucks was there. And when my father died unexpectedly last year, Peebucks was on my lap immediately, licking the tears from my face. He can always sense my pain - that's why I try my best to hide it from him now that my pain relates to his wellness.

It was silly, but as we lay there together, Peebucks all warmth and love, I decided not to tell him he has cancer.

Peebucks is an 11-year-old pit bull mix with an enormous heart. Fate brought him into my life when he was one, and through ups and downs, he was always by my side. My baby. My best friend. My confidant. My soul mate. Always smiling. Always happy to see me.

Many fear him because of the way he looks. I'm used to people crossing the street to avoid him. I'm used to comments in passing: "Hope that dog had a big meal today." "He bite?" "Now that's a mean lookin' dog." At times, depending on my mood, I've defended him to these people. Not that he knows or cares about what they are saying, but I do. His big jowls could be intimidating, I suppose, but to me he just looks like he's smiling. He wouldn't harm a fly (well, except for the one he caught in his mouth many years back), and if anyone had planned to keep him as a watchdog they would have picked the wrong pup, as his usual reaction when he meets a stranger is to wiggle his butt happily and plead to be rubbed.

After consulting with several veterinary experts and doing mounds of research, we decided that treatment was a viable option and that his quality of life would only be compromised temporarily. It's not cheap, of course, but we are making sacrifices and taking on debt to pay for it. The health insurance we have for him is riddled with loopholes and will likely prove useless. But, right now, none of that seems to matter.

Peebucks has to undergo radiation therapy five days a week for three and a half weeks. After one week of treatment, he does not yet have any side effects, but soon a radiation burn will appear and our resolve will be tested. The severity varies from dog to dog, but it's likely Peebucks will be on a lot of medication to treat his pain for about two weeks. I dread it, but it's a journey that we will go on together and, in the meantime, I am doing all I can to make his life amazing: lots of time at the park, visits with doggy friends, more snuggling than ever before. And treats, lots of treats!

"Your dog has cancer." Since the day the doctor said those fateful words, I've cried many times, and I have no doubt I will cry many more before all this is through. The truth, though, is that the tears don't hurt nearly as much as the realization that, one day, he won't be there to lick them away. 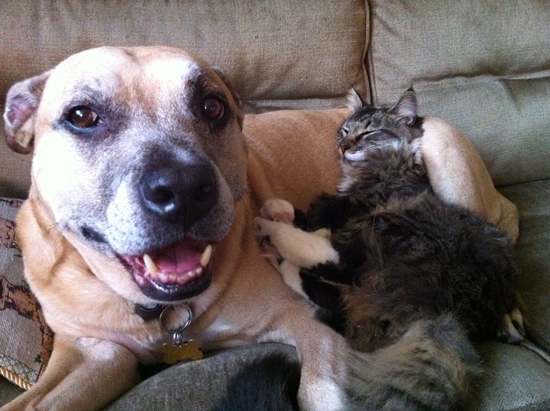 Peebucks and his brother, Mordecai