UPDATE: 5/22 9:20 p.m. -- The dog, Susie, has since been returned to her rightful owner, Curtis, the Oklahoma County Sheriff's Office reported in a Facebook post Wednesday evening.

"'Susie' and Curtis live about a 1/2 mile from where she was found by our deputy and Curtis has no idea why she stood guard of the victim whom he did not know," the OCSO wrote. "It was an emotional reunion between 'Susie' and Curtis, one we were glad to have been a part of."

The post concluded, "Curtis has asked that anyone who was touched by 'Susie's' story to make a donation to the Central Oklahoma Humane Society to assist with shelter needs related to the storm."

A mud-covered dog was discovered amid the rubble of the Moore, Okla., tornado. Authorities say the pup was standing guard over its deceased owner's body.

The Oklahoma County Sheriff's Office tweeted a photo of the scared, black dog, which was found alive in a pile of wreckage after a deadly EF-5 tornado hit Moore on May 20. At first it might have seemed like one more miracle, but once authorities found out why the pup had been sitting in that particular spot, the dog's story became even more heart-wrenching.

On Tuesday, deputies learned the little dog was actually guarding the body of its owner, who had died as a result of the storm, Oklahoma's KWTV noted.

STORY BEHIND DOG PICTURE: The dog was guarding it's deceased owner. Taken to shelter; deputy plans on adopting. pic.twitter.com/cQ1LzHb2Fu

In a message posted on Facebook, the OCSO described how the dog was found standing over a deceased individual:

May 20, 2013 we posted this picture of a dog on our Twitter account "scared, but this little pup survived". Today we found out the story behind the picture. The dog was standing guard over a deceased individual, possibly it's owner, in Moore following the tornado there. The dog was taken to a shelter and the deputy who found the pup, if possible, plans on adopting the dog. Man's best friend to the end.

This tragic and touching tale is one of many to arise from the aftermath of Monday's tornado, which left 24 dead, including nine children.

Media outlets have captured several touching photos of Moore residents being reunited with pets found in the wreckage of their homes. One elderly tornado victim, Barbara Garcia, had her prayers answered when she found her beloved dog, Cathy, while being interviewed on live television. Video of the discovery quickly went viral.

Many groups are helping to reunite Oklahoma residents with their pets. The Oklahoma Humane Society is working to treat and house all injured and lost animals, while Reddit users have banded together to create threads for people looking for their lost pets.

UPDATE: 5/22 3:45 p.m. -- A woman replied to the OCSO's Facebook post about the dog found with a deceased tornado victim and claimed the dog's name is Susie and she belongs to her brother, Yahoo! Lookout first reported.

"She is my brother Curtis' dog and he is alive and the only reason he is not well is that he is looking for Susie," she wrote.

The OCSO responded and said they would be in touch. The Huffington Post has reached out to the OCSO for comment. 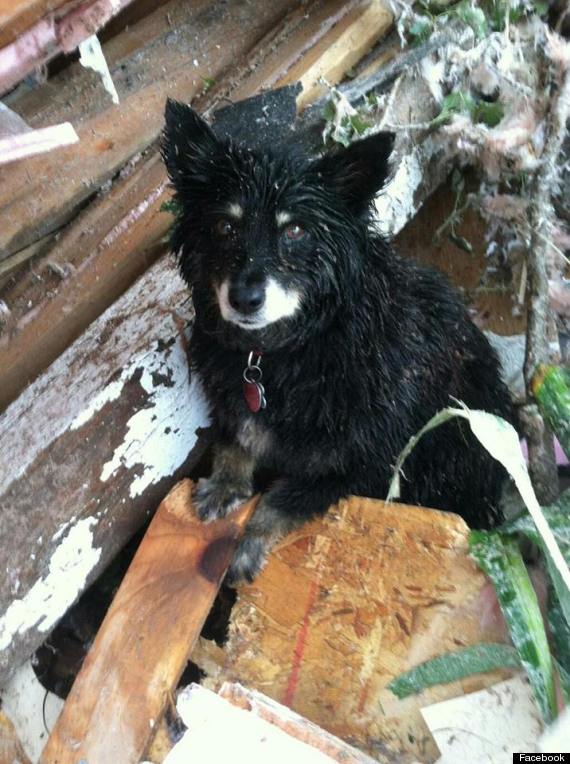 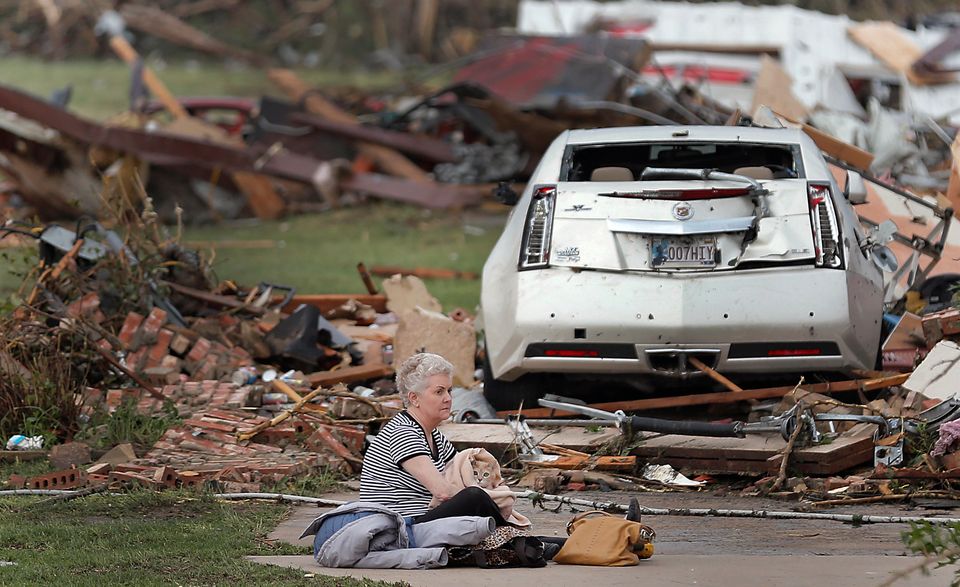 1 / 30
Kay James holds her cat as she sits in her driveway after her home was destroyed by the tornado that hit the area on Monday, May 20, 2013 in Oklahoma City, Okla. (AP Photo/The Oklahoman, Chris Landsberger)
AP