The next time your dog digs a hole in the backyard after watching you garden, don't punish him. He's just imitating you. A new study reveals that our canine pals are capable of copying our behavior as long as 10 minutes after it's happened. The ability is considered mentally demanding and, until this discovery, something that only humans and apes were known to do.

Scientists first discovered that dogs are excellent at imitating their owners in 2006. Or at least, one dog had the talent: Philip, a 4-year-old Belgian Tervuren working with József Topál, a behavioral ethologist at the Hungarian Academy of Sciences in Budapest. Topál adapted the method (called "Do as I do") that Keith and Catherine Hayes developed in the 1950s for teaching an infant chimpanzee to copy their actions. Philip was already a trained assistant dog for his disabled owner and readily followed Topál's commands. First, Topál told him to stay, and then commanded "Do as I do." The researcher then performed a simple action, such as jumping in place, barking, putting an object in a box, or carrying it to Philip's owner. Next, Topál ordered, "Do it!", and Philip responded by matching the scientist's actions. The experiment was designed to explore dog's imitative abilities, not to measure how long Philip's memory lasted; but his owner used Philip's skill to teach him how to do new, useful behaviors, such as fetching objects or putting things away. 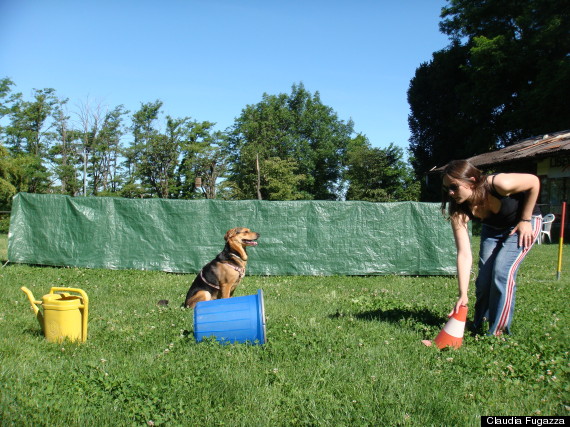 The dog, Adila, will imitate the act of touching the cone once her trainer tells her to "do as I do."

Despite Philip's abilities, "nobody really cared, or saw that it could be useful for investigating how dogs learn or see their world," says Ádám Miklósi, a behavioral ethologist at Eötvös Loránd University in Budapest who was part of Topál's team. And in 2009, another team concluded that dogs were only able to correctly imitate if there was no more than a 5-second delay between watching the action and repeating it. With such a short retention span, dogs' vaunted imitation skills seemed useless.

But Miklósi didn't fully accept this; he thought that the experiment needed to be adjusted by teaching the dogs more explicitly. There are two basic commands the dogs must learn: "Do as I do," which means they need to pay attention to what is being demonstrated. The second command, "Do it," requires the dog to imitate what they've seen. What was missing was also a command that the dog needed to wait before performing the imitation. An Italian dog trainer and graduate student at Eötvös Loránd, Claudia Fugazza, agreed and figured out a new method. "We wanted to see if dogs can do 'deferred imitation,' " Fugazza explains. "So, they needed to learn that they also had to wait." Deferred imitation is considered a sophisticated cognitive skill, because it requires an individual to recall an action after a delay of 1 minute or more—something that is possible only if the individual has retained a mental representation of the action.

Fugazza and Miklósi worked with eight adult pet dogs that ranged in age from 2 to 10 years old and their owners. The canines were all females of various breeds—border collies, a Yorkshire terrier, a Shetland sheepdog, a Czechoslovakian wolfdog, and one mixed breed. The owners trained their dogs using the "Do as I do" method. For instance, an owner would tell her dog to "Stay," and then command, "Do as I do," whereupon the owner might walk around a traffic cone, or put her head in a bucket placed on the ground, or ring a bell suspended from a bar. After returning to her dog, the owner would wait 5 seconds, and then command, "Do it!" The dog was expected to copy her owner's behavior.

To see how long the dogs retained the memory, the owners were then asked to add another step to the test. After saying "Do it!", they walked their pets behind a screen 14 meters away that hid the cone or other experimental objects, so that the animals wouldn't continue to look at them. Then they waited for up to 30 seconds before returning to the starting position. "We just kept slowly increasing the time between the demonstration and the 'Do it!' command," Fugazza explains.

Once the dogs could imitate the behavior twice in a row after waiting for 30 seconds, they were ready for the testing phase. Each dog was given 19 tests in eight different conditions—including copying a familiar action, a novel action, and a distracting action. All the dogs were shown the same novel action to imitate: Each one watched her owner enter a wooden box. This time, they were expected to wait behind the screen for one full minute, before returning to the starting position and being told "Do it!" For the distracting action tests, the dogs watched the owner do something they had seen before. Again, they were led behind the screen, but this time commanded to lie down, or fetch a ball. The waiting periods during these sessions lasted from 30 seconds to 4 minutes. 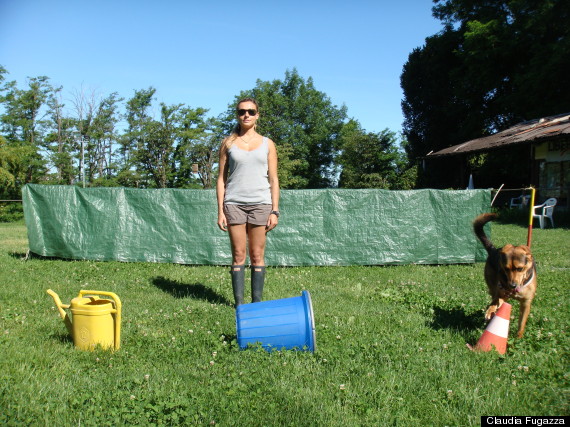 A dog imitates its trainer

The dogs endured their longest breaks after watching a familiar action—with times varying from 24 seconds to 10 minutes. "They can wait even longer," Fugazza says, "but we really don't expect the owners to stay behind the screen for an hour!" The dogs also showed their smarts by repeating the action that they'd witnessed, even when a person other than the demonstrator and who did not know which action the dog was expected to copy gave the "Do it!" command. All the dogs completed 18 trials, scoring almost perfect marks; six dogs made one error each, one dog made two, and another made six mistakes, the team reports this month in Animal Cognition. "The statistical results are very robust," Fugazza says, "and they show the dogs can do deferred imitation." This suggests, she adds, that dogs have declarative memory—long-term memory about facts and events that can be consciously recalled. Until now, only humans have been shown to have this type of memory.

"It is a very nice demonstration of deferred imitation in dogs," says Frans de Waal, a primatologist at Emory University in Atlanta who suggests that now that this ability has been found in our canid pals, it's likely to be found in many other animals. Still, the discovery will likely be a surprise to even the most experienced dog trainers, says Brian Hare, a comparative psychologist at Duke University in Durham, North Carolina. "I doubt that they would have predicted that dogs can learn new actions by observing what a human does, remembering the actions, and then repeating those actions, after translating them to their own doggy body plan." And while de Waal agrees with the researchers that the dogs must be using declarative memory to do this type of imitation, Hare and others are less certain. "That's the weakest part of the study," says Jonathon Crystal, a comparative psychologist at Indiana University, Bloomington. "But the evidence for delayed imitation is solid and impressive."

Fugazza and Miklósi hope that trainers, especially those teaching guide and other working dogs, take advantage of their willingness to learn by watching our actions. "They do it so naturally, because dogs are predisposed to learn socially from us," Miklósi says. He and Fugazza advise dog-owners and trainers to think of useful actions for dogs to copy, such as fetching the mail from the mailbox, carrying a tool to the garden, or better yet on these hot summer days, grabbing a beer for Dad from the 'fridge.

1 / 17
Angler fish
It's almost impossible to catch a male angler fish. Why? They don't exist for very long. When a male angler fish is born, it is a tiny creature with no digestive system. As such, it must swim to find a female angler fish as soon as possible. When it does, it bites and releases an enzyme that removes a part of her flesh allowing the male to fuse. Soon it becomes nothing but a small bump on the side of its partner. This lump stores the sperm needed for fertilization when the female is ready to reproduce. <a href="http://www.flickr.com/photos/helder/" target="_hplink">http://www.flickr.com/photos/helder/</a>
Image: Flicker: Helder da Rocha