This is no dirty dog.

Lysette Melendez, 16, tweeted a photo of her dog, Benji, snuggled in her shower caddy on Tuesday and got more attention than she ever expected, with more than 21,000 retweets as of Friday morning.

He kept following me & I had to shower so I let him stay in the bathroom then he cried because he couldnt see me so pic.twitter.com/3HslkIPlwI

“I knew my puppy was cute, but holy crap,” the California teen told BuzzFed.

Benji does look adorable, but dog trainer and behavior consultant Heather Gutshall told The Huffington Post that she has some concerns about the setup.

Gutshall, a certified professional dog trainer who owns a dog-sitting and -training company, noted that in a wet environment like a shower, someone could easily slip and injure the pup.

Melendez told HuffPost in an email that she watched the puppy the whole time he was up there and made sure to take a cold shower so the steam didn’t hurt Benji. Benji was out of the stream of water and didn't even get wet, she added.

She also told BuzzFeed that she lined the caddy with a rag so the pup couldn’t fall through.

If a dog simply likes coming into the bathroom or shower, there's no problem letting your pet join you, Gutshall said. But if a dog truly becomes upset when left alone, bringing him in with you is not the best way to help him cope in the long run, the dog trainer noted.

“If a dog is wanting to come in because it’s too anxious being alone, you’re not giving the dog the skills it needs to learn to be okay on its own,” Gutshall said.

"This picture was taken when I had my puppy for about 2-3 days," she wrote. "He was nervous because he was new to my home and didn't want to be alone which I understood, so I let him come in with me."

For those dogs who do have true issues being alone, Gutsall says one technique to make a dog feel comfortable on its own is to give the dog a treat or toy it likes, then leave it alone for a short period of time, coming back before it has the chance to get distressed. An owner can then gradually increase the length of the time they are away until the dog becomes OK with longer periods solo, Gutshall said.

She added that in cases of diagnosable separation anxiety, which typically involve a dog becoming so anxious that it starts harming itself, an owner should seek professional advice.

This story has been updated with comments from Lysette Melendez.

PHOTO GALLERY
Pets In The Tub 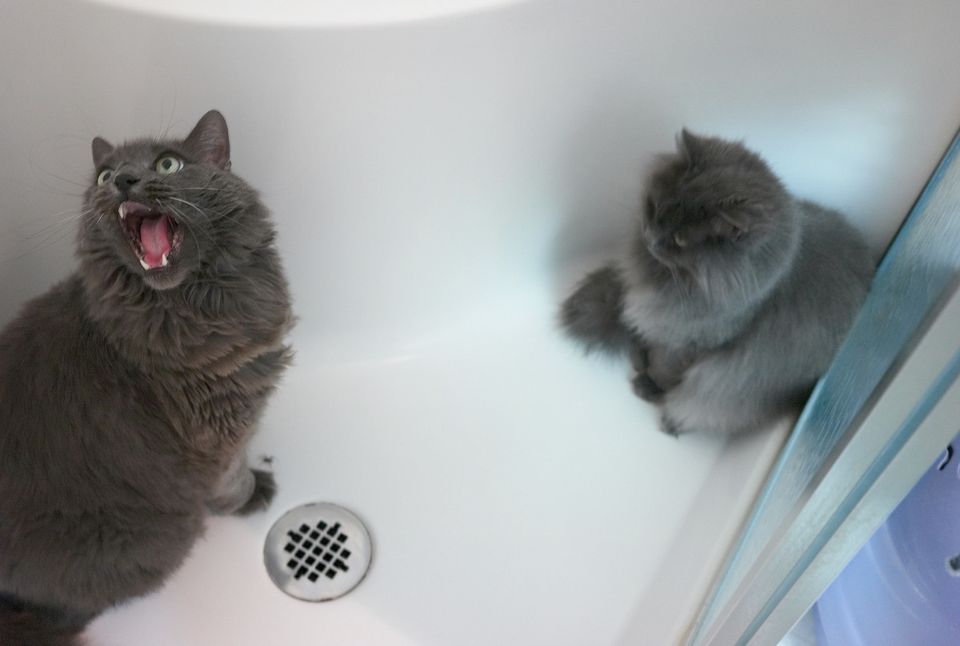