A video of a German shepherd intensely guarding a live lobster has taken the Internet by storm, with multiple media outlets cooing in awe over what they called the “protective” dog trying to “save” her “lobster friend” from becoming dinner.

But everyone completely misinterpreted the video, a dog trainer told The Huffington Post.

“She knows the lobster is not her puppy. It is a living piece of food, basically,” said Andrea Kilkenny, a professional dog trainer and owner of Our Gang Pet Services, a pet training company based in New Jersey.

Kilkenny said it’s clear that Sami, the dog shown in the video, is trying to prevent humans and another dog from getting access to the lobster.

“In dog language this is ‘resource guarding,’” Kilkenny said. “She’s not protecting it from harm.”

Kilkenny explained that “resource guarding” is when a dog tries to make sure no other animals -- or people -- can take an object that the dog sees as valuable. She said dogs will sometimes guard food, toys or sleeping spots in a similar way.

Kilkenny also expressed concern that the situation could have turned dangerous. She noted that although Sami displayed “pretty good self control,” such guarding behavior can turn into aggression when people attempt to take the object away. The second dog in the room “exacerbated” the situation, Kilkenny said. She also highlighted that at one point Sami curls her lip upwards and bares her teeth at the other canine.

There's no single solution for how to deal with a dog exhibiting guarding behavior, and the right response can depend on the disposition and training of the dog involved, Kilkenny said. She noted that removing other dogs from the area is an important step. "Dogs will guard something because there is pressure from another animal," she told HuffPost.

Kilkenny also stressed the importance of learning how to recognize behavioral cues in dogs. “We love dogs so much,” she said. “It’s always interesting to me how people don’t understand the behavior of a species they share a home with. The more people educate themselves about [animal] behavior, the more harmonious our relationships will be.”

That Dog Guarding A Lobster Probably Thinks It's Dinner, Not A Friend
German Shepherds 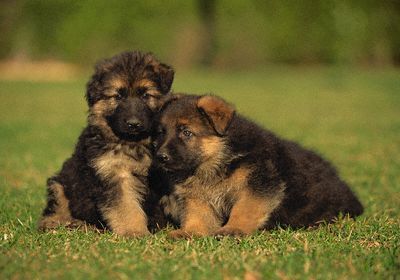