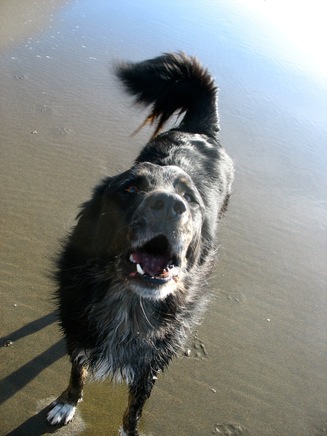 I have been asked to express some thoughts about proposed changes -- meaning, more restrictions -- to dog policy in the Golden Gate National Recreation Area (GGNRA). I cannot speak for my estimated 100,000 fellow canines in the city, but will try. Yes, I know I might be perceived as having a conflict of interest. But really, who doesn't? We all want to enjoy this beautiful public land, and so far as I can tell, we all do. But my human tells me that of all the controversial topics he has and might wade into, this could be the most inflammatory. (Humans: strange.)

A couple years back, when this first became a big catfight (sorry), I instructed my human to download and read the entire 24-page summary of the various proposed options under consideration. Some good people spent a lot of time on this proposal. The full proposal was 2,338 pages, they say -- seriously, who would read that? It weighs almost 15 pounds, too much for a proposal, if too little for a dog (sorry, little dogs). Even the summary is not easy reading -- even for a human -- but we got through it together. I also made him read this historical summary for context.

Many humans seem to have read it too. The GGNRA received more than 4,700 comments on the draft. Some politicians have even gotten involved on our behalf, thank you. But dog advocates feel such comments were largely ignored in the new proposal which would add significant new restrictions. This is like when my human tells me to "sit" and no biscuit materializes. Why bother?

The first overall objective of the whole proposal is to "Minimize conflicts related to dog use by providing a variety of safe, high-quality visitor use experiences, including areas where dogs are allowed." Who could argue with that? It's what we have now, basically. But a bit of perspective is in order.

Currently, less than 1 percent of all GGNRA space is open for off-leash dogs. It's an "urban recreational area," technically. Now, I've been romping on the beaches under consideration, namely Crissy Field in the Presidio, Ocean Beach and Fort Funston, for years now. In all that time, I have never seen any kind of altercation between humans and dogs, or even humans and humans. (There have been a few between dogs, of course -- it's our nature -- but nothing serious.) I've heard that bad encounters do occur and believe that must be true -- like it is true for streets, other parks, ballgames and wherever various species congregate.

But the proposed regulations seek to address a few concerns:

To my eyes, ears, and nose, all evidence points to the status quo as being the best of the options presented in the original proposal. It's the policy in effect since 1979. I'd perhaps support some reasonable changes -- perhaps new restrictions, such as licenses and/or fees for "commercial" dog walkers which even the dog walkers' association supports. The GGNRA folks also recommend this and such changes have been added to the revised report. The packs don't bother me much, but when a few large gangs convene at once, it can be a bit overwhelming for some of us. So perhaps some limits on numbers of dogs per walker and fees for the park could be advisable. Heck, I'm licensed, and we could more strictly enforce the mandatory dog license law in the GGNRA too, with big fines for violators. Likewise for those few irresponsible "unfixed" fellows -- and no, I don't say that just because misery loves company.

In the science and practice of ecology, in fact, there is a cardinal rule: Beware unintended consequences. It is likely that further restrictions could lead to much more crowding of canines in other places where the complaints and conflicts would be worse than anything we have now.

It's also been reported that it would cost $800,000 to implement and enforce the recommended new policies. Ahem. May I respectfully suggest that these funds be used for other good purposes -- better bathrooms, signage for humans, more poop bags, water fountains for all species and gigantic bins of free biscuits? Or whatever you humans, in your infinite wisdom, think best.

Supporters of more restrictions have noted that the GGNRA is the one such park nationally that allows off-leash dogs. True, and it's also true that this is the San Francisco Bay Area we are talking about. In the case of the city itself, "49 square miles surrounded by reality." What more, er, logical place to have a more humane exception to the prevailing wisdom?

I agree with one dog owner who said of the proposal, "We believe that with proper enforcement of existing laws, public education and better signage, dog lovers and non-dog lovers can coexist." I'd venture a joke here about whatever a "non-dog" might be, but I'm not one of the "crazy dog ladies" or "crazy dog men" who go a bit overboard in their canine fanaticism. God ("dog" spelled backwards) love 'em, but I'm just a dog.

As many wise humans have advised, and I concur: If it ain't broke, don't fix it. A bit of tinkering to improve things should be fine, but to radically change policy because of some old laws and a very small minority of abusers and cranks is not good behavior and, excuse me, barking up the wrong beach. I mean, again, if I can live peacefully in a house full of %*@#@%! cats, can't you all just get along?

Comments on the kurfuffle are still being accepted through January 11, 2014 here.