A frightened Belgian shepherd was rescued on the George Washington Bridge on Thursday, after an arduous 12 hour journey trying to makes its way back home to New York City.

According to officials, Charlie had traversed nearly three miles to the bridge from Leonia, New Jersey where he escaped from a Fourth of July party after becoming frightened by the loud fireworks display.

A spokesman for the Port Authority said Charlie was reunited with his owner at the Animal Paradise Hospital in Cliffside Park, New Jersey. The dog was examined by a doctor for a hind leg injury and appears to have been sprayed by a skunk.

Charlie's owner Tom Robinson said with relief and gratitude, "I can’t believe how good he looks after that horrible night. I wouldn’t look half as good if I had a night like that." 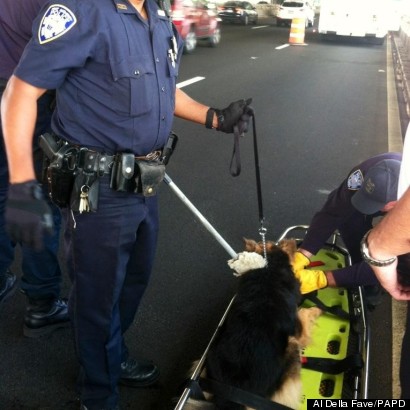