Thanks to the residents of a Texas city and a Facebook campaign that has gone viral, an abused dog who was was left for dead in a garbage bag has been given a new chance at life.

The pooch, who has since been named "Buck," was reportedly found on Jan. 5, after a local resident of Conroe, Tex., noticed that a garbage bag left on the side of the road and "tied to a t-post of a fence" was moving. He tore the bag open and was shocked to find the 3-year-old mixed breed, covered in blood and weakened by the cold, inside. 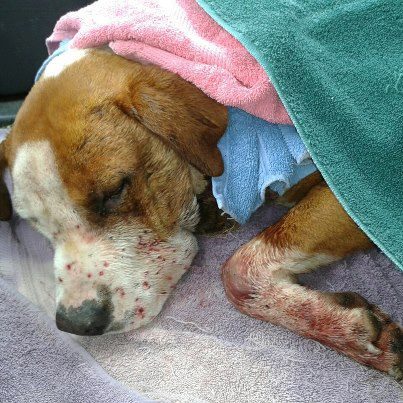 (Buck at the vet. Photo credit: Facebook/Bucks for Buck)

According to the Montgomery County Police Reporter, the dog had been shot in the head and face with a pellet gun. He had also been left outside for a long time, exposed to the winter air for at least 10 hours. When the pup emerged from the bag, he reportedly could only take a few steps before collapsing.

Unable to reach animal control, the man who found Buck called his neighbor Tami Augustyn, a local animal lover known for rescuing animals in distress. Augustyn immediately rushed to the scene and brought the injured dog to a veterinary emergency clinic, where vets began treating Buck for multiple pellet wounds and hypothermia. The dog had also suffered damage to his eyes, and doctors fear that he may be permanently blind.

“Dogs love unconditionally. You’ll never find anyone or anything that loves you like a dog. Why would you injure something like that? I don’t understand," Augustyn said of Buck's horrific injuries.

Wanting to help Buck get well, but unable to cover the hefty medical bill, Augustyn took to Facebook to appeal for help.

The response, she says, has been astounding.

Augustyn's page, "Buck Needs Bucks for his Buckshot Injuries," has been liked over 18,000 times since it was first launched this weekend -- and according to the NY Daily News, Augustyn has already raised more than $10,000 for the dog's medical care.

"The last 24 hours [have] been overwhelming for me. I have gone from not knowing if I would have enough money to pay for Buck’s emergency bill to having an unbelievable amount of money to provide THE BEST care possible for Buck’s recovery," Augustyn wrote on the Facebook page early Tuesday, adding that she not only has enough money to cover the dog's emergency clinic bill but also to pay for an appointment with an ophthalmologist who could determine whether there are options for surgery. 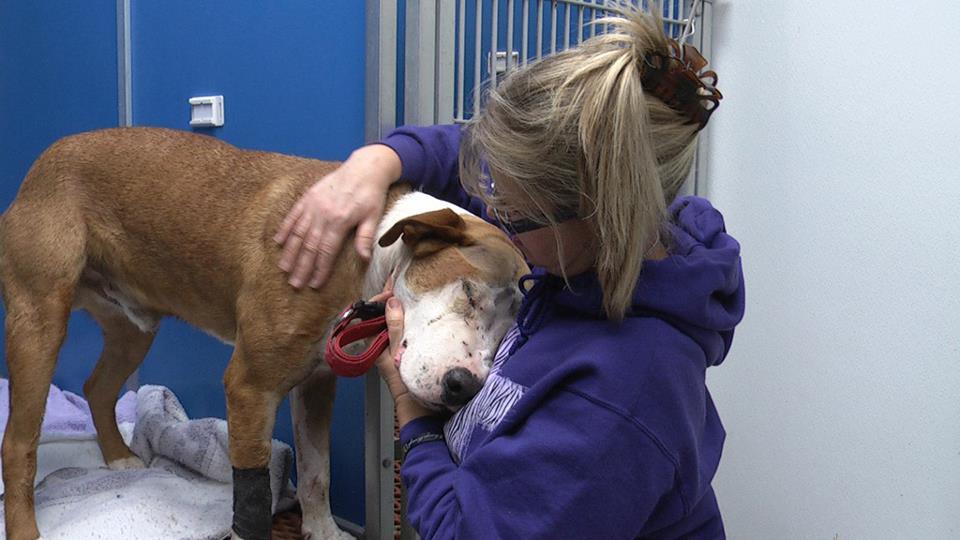 "Your generosity has been AWESOME and if it weren't for each and every one of YOU, Buck would not have a 2nd chance at love," Augustyn wrote in an earlier post.

According to the NY Daily News, Augustyn will be keeping Buck as one of the family and says she plans on using any extra money raised in the Facebook campaign to create "The Buck Foundation," an organization that will focus on helping abused dogs.

As for Buck, dubbed the "dog who wouldn't die" by the Daily Mail, he has miraculously begun walking again and appears to have bonded with his new owner.

Unfortunately, those responsible for Buck's injuries have yet to be caught. As Yahoo! News notes, police in Montgomery County say that they are still investigating the incident.