Steve Alioto thought he’d lost everything in the massive storm that hit California last week. His boat, where he’d lived and kept all his possessions, had been destroyed; and worst of all, his dog and best friend Daisy, who’d been on the boat when the storm hit, was missing. Alioto, who’d reportedly been helping a friend in the storm Thursday when his boat was wrecked, assumed Daisy had died.

Little did Alioto know, however, that Daisy was very much alive. She’d somehow escaped the boat as it was sinking and had swum more than a mile to shore -- all in the dark. According to KPIX‑TV, she then walked inland to Sausalito Presbyterian Church in Sausalito, California, where she and Alioto had frequently gone to get a free meal. There, Alioto’s beloved pit bull waited for her owner to find her. 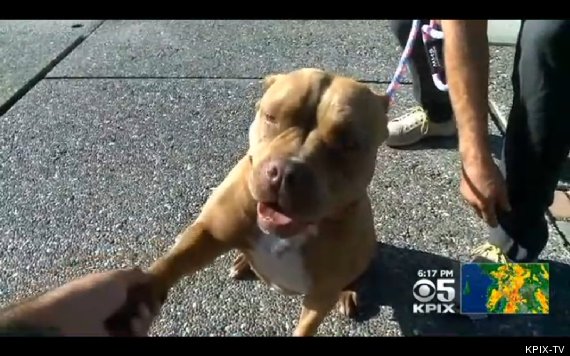 The Marin Independent Journal reports the Rev. Paul Mowry figured out who the dog was after scanning Daisy’s microchip. When Alioto showed up at the church last Friday, the reverend had the honor of telling him the good news.

The reverend called the reunion between Alioto and Daisy a “remarkable” thing.

The duo are now reportedly staying on a friend’s boat.